Whew! It was a hot one out there today. I did manage to get some weeding done in the morning, but it was almost too hot even then. Thankfully, it was quite nice in our shaded front yard so I could finish my project. It’s coffee chime! lol.

A while ago I bought this $1 coffee pot and I knew I wanted to somehow use it for a coffee pot wind chimes project. I love its vintage patina. First, I thought I would hang small cutlery from the bottom, but I’ve seen that done before. I wanted to come up with something new. New to me at least. 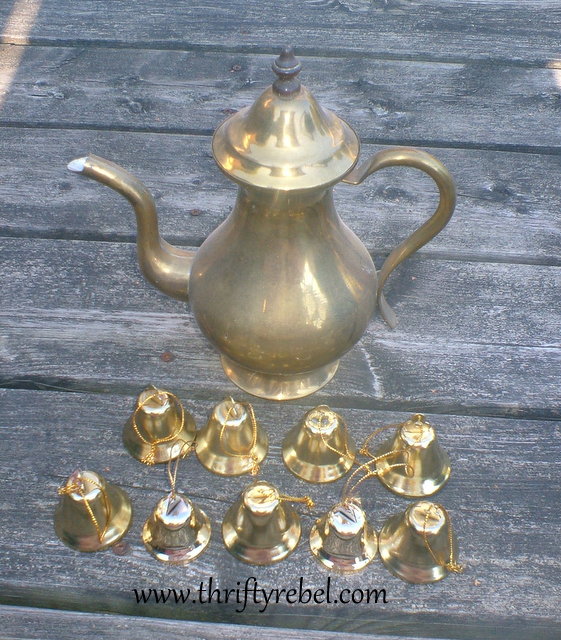 I decided I wanted to have the chimes coming out of the coffee pot spout and thought about what I could use. I remembered that I had tons of gold bells in my Christmas decorations stash so I rooted them out. After removing the red bows and cutting off the hangers they were ready to use.

They’re not a perfect match, but I don’t tend to like things too matchy, matchy. 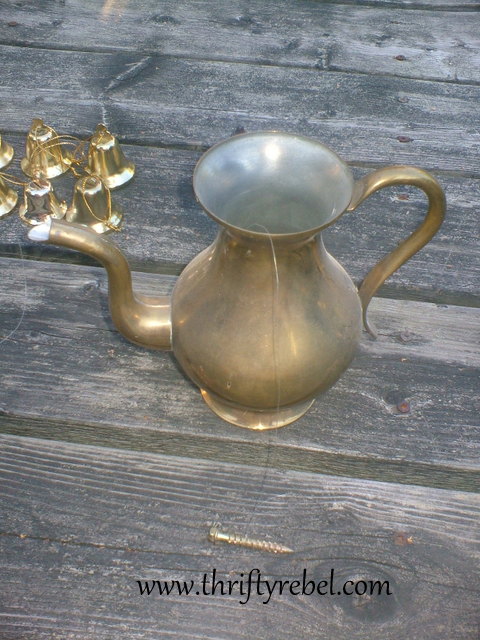 I hunted through the tool box for a screw big enough to go across the spout inside the coffee pot to carry the weight of the bells. I threaded some fishing line through the spout from the outside in and tied it around the screw, making sure to allow myself lots of line because I wasn’t sure how much I would need.

Then I attached the bells to the fishing line, tying them one at a time. I liked the way it looked, and sounded, after five so I stopped. 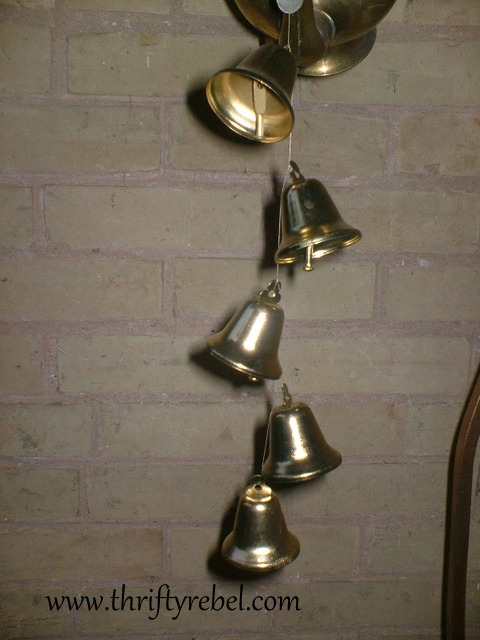 Here’s a close up to show how the bells were tied to the fishing line. Each one was attached with two simple loop knots. I started with the top bell and moved down the line to tie each bell until I was done.

From a short distance the line is pretty much invisible. 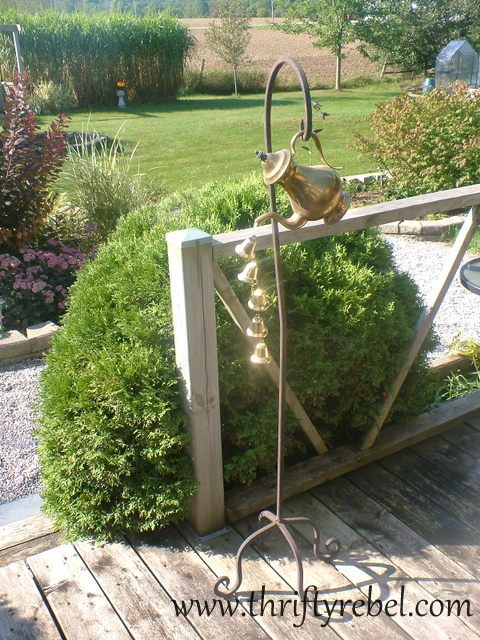 It was my husband John’s idea to use this shepherd hook stand that we already had to hold the chimes. It works perfectly. I put some pea gravel inside the coffee pot to give it some weight so it counter balanced the weight of the bells.

Then we were sitting on the back deck looking at it, brainstorming, and we decided it would be cool to have the chimes pouring into a nice cup and saucer. 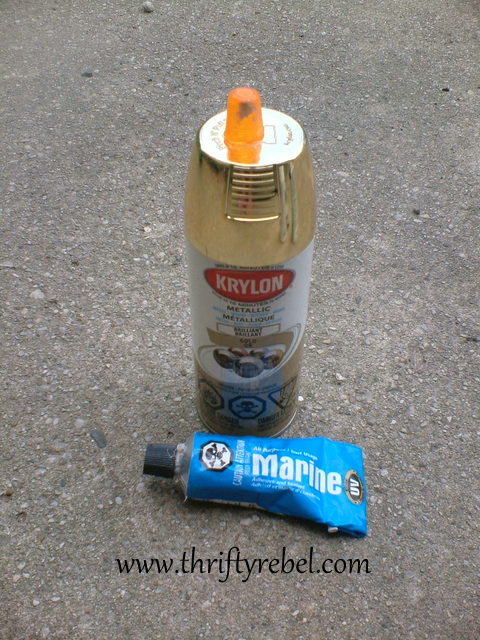 I spray painted the black shepherd hook stand Krylon Metallic Gold and placed it in the garden. Then I grabbed a green glass bottle that I had and placed it over a green stake.

I used Marine Goop adhesive to glue the saucer to the bottle, and the cup to the saucer. 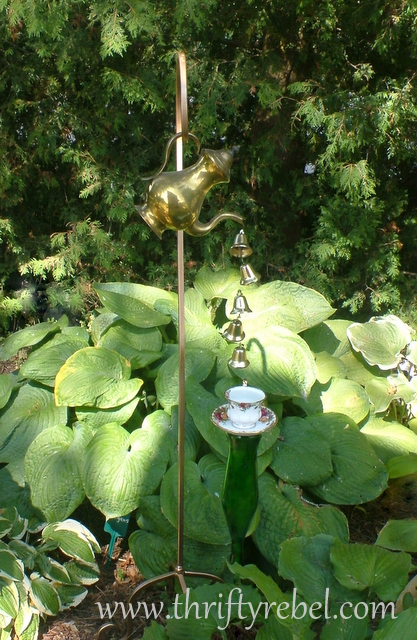 I filled the cup with water to invite the birds to feel free to have a drink. Several birds have already come to sit on the shepherd’s hook. There’s a large birdbath close by so they seem to be using this as a rest stop, and that’s fine with me. Birds are always welcomed in my garden.
What I didn’t expect from these coffee pot wind chimes is that because I tied each bell on to the fishing line individually, each one spins on its own in the wind, and its very relaxing to watch. This was a nice surprise.

Hey there I’m Tuula, creator of Color Me Thrifty, formerly known as Thrifty Rebel Vintage.  I’m super excited you found me. I’m a repurposing, reusing, redecorating,  redoing,  rethinking, and DIYing kinda gal who loves to share budget-friendly projects for the home and garden. I hope I can inspire you to color a home that smiles. When it comes to creativity don ‘t be shy. Be fearless! Read more here.

All content on this site belongs to Color Me Thrifty (formerly Thrifty Rebel Vintage), unless stated otherwise. This includes all posts, tutorials, photos etc. that appear on this site. Any content from this site cannot be used without my consent, and must be credited to myself and this site with a link back to the original post on this site. Also, all photo watermarks must remain intact. Please see full disclosure here.

You are reading and following the advice on this site at your own risk. All content on Color Me Thrifty (formerly Thrifty Rebel Vintage) is for inspirational purposes only. Please seek the help of a professional if you have any concerns about any project undertaking. This site is not intended to replace the advice of a professional. Please see full disclaimer here.

769shares
This web site uses cookies to ensure you get the best experience on our website. Learn More