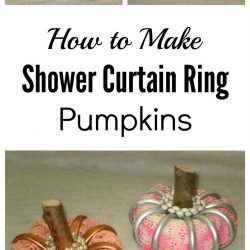 For me, craft supplies also include thrifted things that I repurpose into other things…. like plastic shower curtain rings for example. 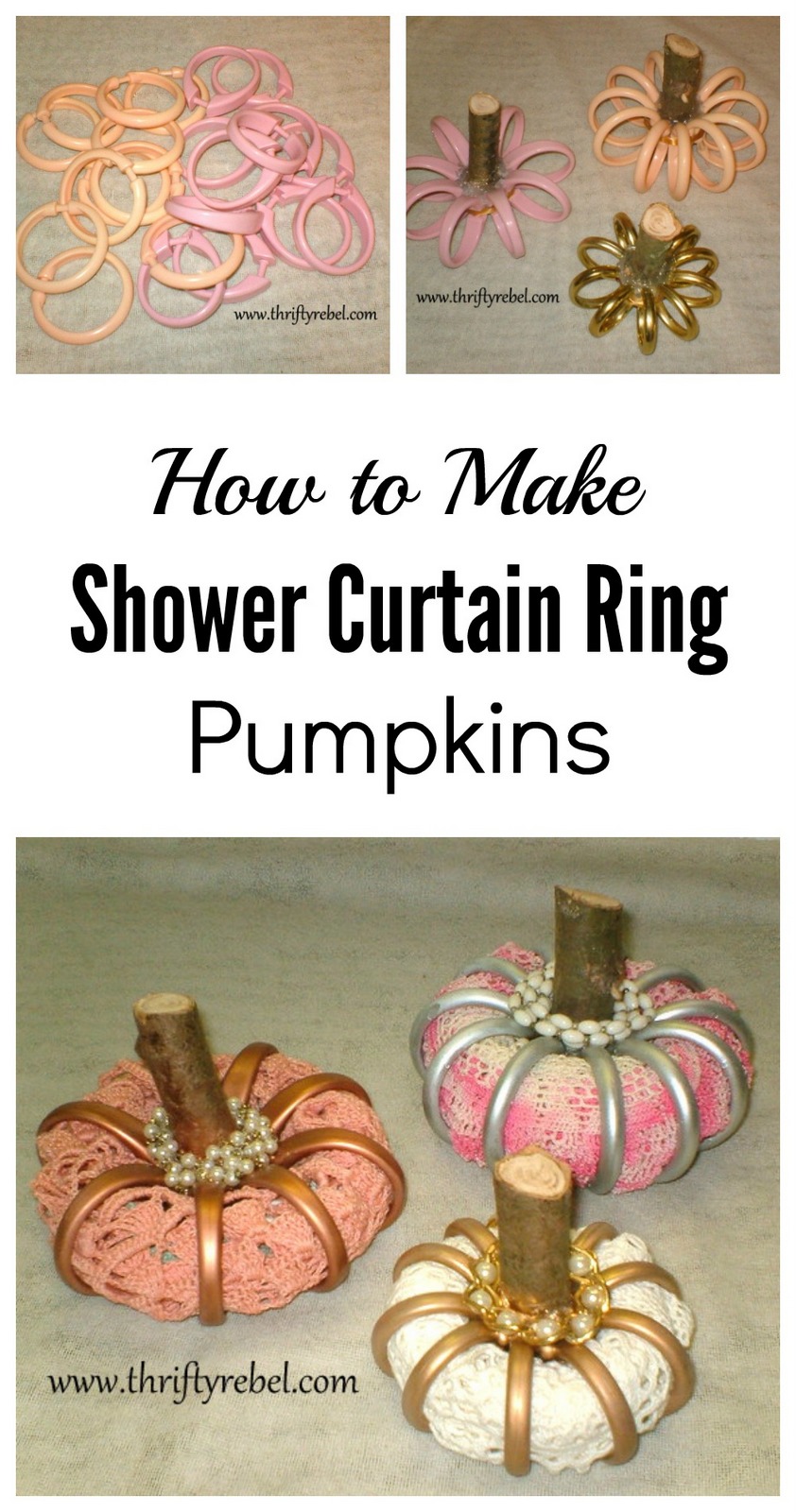 A couple of weeks ago my thrift store had small Ziploc bags of them for 10 cents a bag. I got a large grocery bag full of them. They just kept throwing them in. I guess they wanted to get rid of them because I got about 200 for $1. They probably thought no one else would be crazy enough to buy them all. Well, I’m happy to have them. What am I going to do with them? Well, I have lots of ideas. Here’s the first. Stuffed shower curtain ring pumpkins.
I started with these ordinary plastic shower curtain rings. 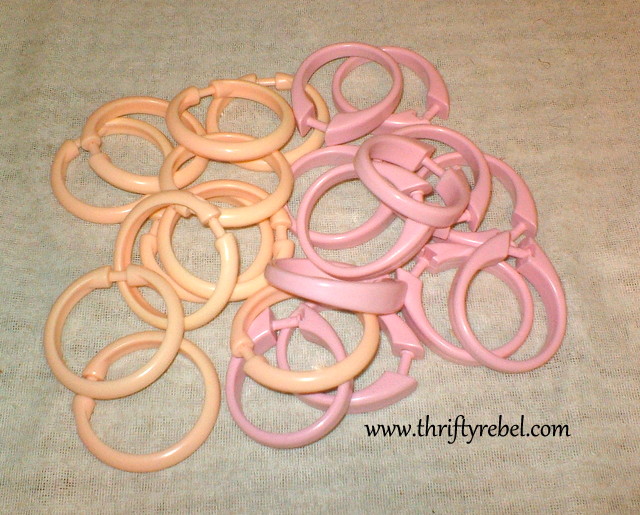 First I made sure all the rings were closed. Using my glue gun, I glued the first one onto the end of some Christmas wrapping ribbon, making sure to wrap the end around it. Then I glued the rest onto the ribbon as shown in the picture, leaving enough space between them so they can easily be shaped into a circle. 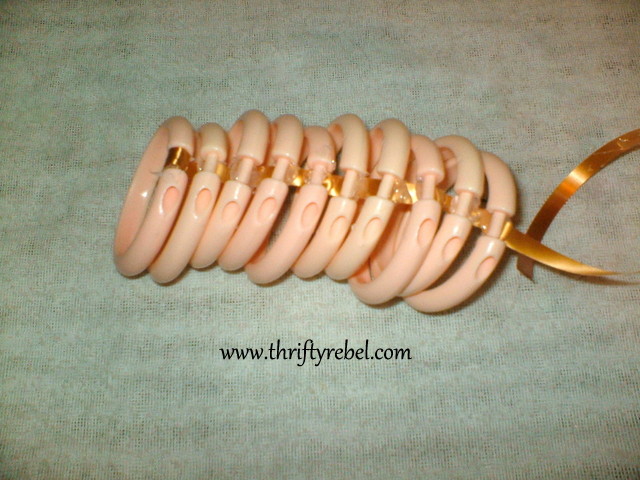 We recently did some cedar pruning so I used some pieces I cut for stems. I wrapped the ribbon of rings around the stem, gluing the ribbon ends to join it together in a circle. Then I put a lot of glue into the centre to hold the rings in place. While the glue was drying I arranged the rings as I liked. This was a little finicky so I worked on half of the rings at a time, holding rings that wouldn’t cooperate in place until the glue hardened. 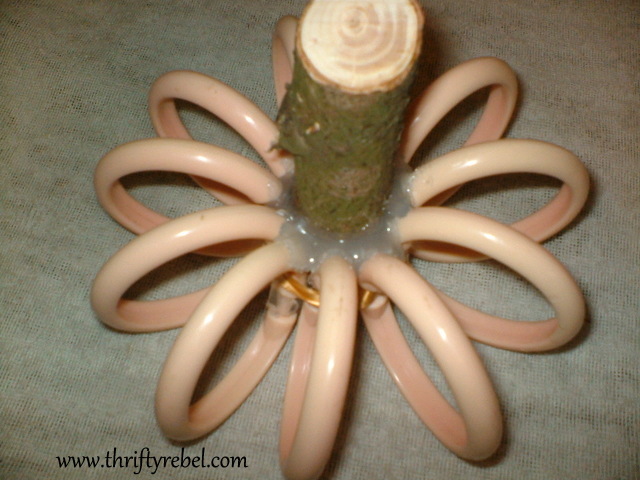 Then I did the same thing underneath, which was really only done for extra stability. 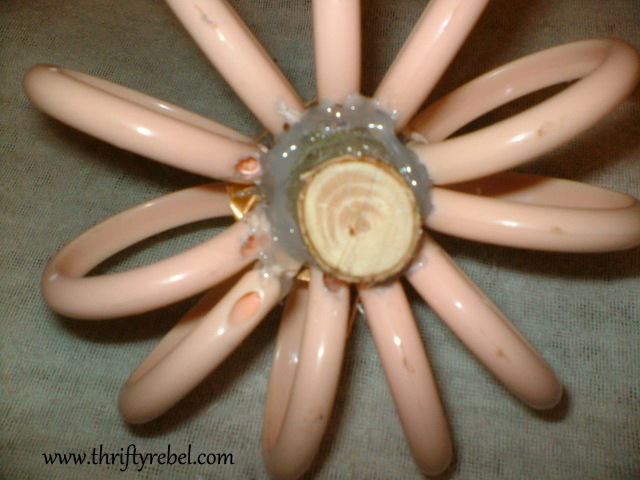 Here’s what they looked like after gluing. The small one at the front is made out of curtain rod rings that I also found in the bag. 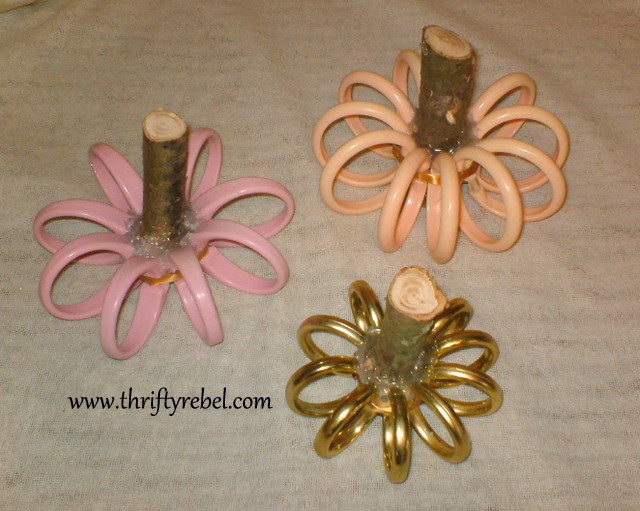 I spray painted them using Krylon Metallic spray paint in silver, copper, and gold. I used toilet paper rolls on the stems to protect them from the spray paint.

At this point I had no clue as to what I was going to do with them, so I set them aside for a few days while I worked on other things. Then one day I was looking through my doily stash for another project, and the idea came to me. 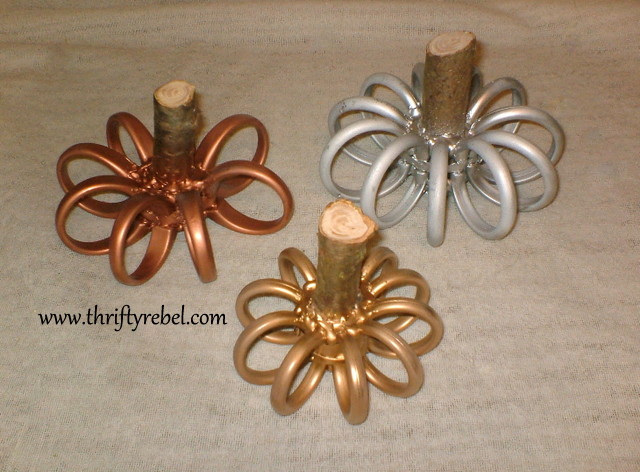 So, I took some doilies from my stash, rolled them up and stuffed them inside the pumpkin rings. To finish them off I decorated around the stems with bits of costume jewellery. 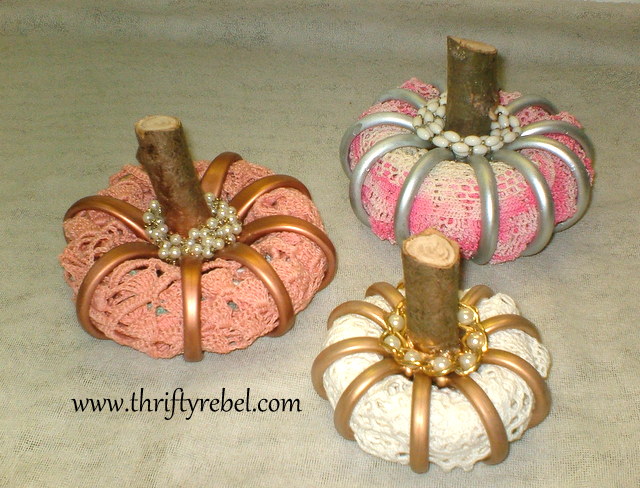 And here they are, all finished. I just love using ordinary household items, that would usually be discarded, and making them into something else. It’s just so much fun!

If you enjoy these repurposed pumpkins, you might also enjoy my repurposed teacup pumpkin.

175shares
This web site uses cookies to ensure you get the best experience on our website. Learn More