I love to build things. My dream is to have a workshop someday with a compound mitre saw, a table saw, and all the other cool tools needed to create whatever my heart desires. But, right now that’s still in the dream stage so I do what I can with what I have.

When I posted my craft room makeover at the beginning of December I said I would show you how I built my bookcase unit all by myself.  Me and my power tools that is. Two power drills, one electric and one battery powered, went kaputski during this project. But that was OK by me because I seriously needed a new one and I find it hard to replace anything that works. We gave them both to a guy we know who likes to tinker with stuff like that.

This isn’t the first bookcase unit I’ve built (I built a five unit one for John’s home office) but it’s been about ten years and I forgot how much patience is required. I swear I only swore a couple of times. Honest!

So, here’s my finished bookcase. It’s made of two units that are attached together. 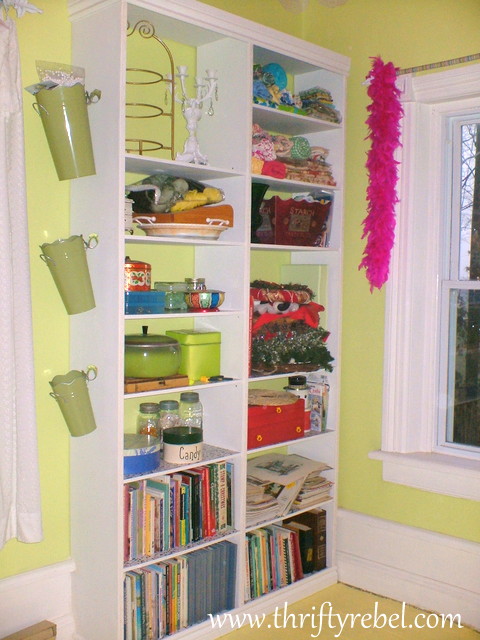 I used 1/2″ MDF and the good folks at the RONA Building Centre cut the pieces to my specifications from two 4′ x 8′ sheets. I got four 1′ x 8′ lengths for the sides from one sheet, and sixteen 1′ x 2′ shelves from the other sheet. If I was making the shelves any wider than 2′ I would have used 3/4″ MDF instead for more strength. 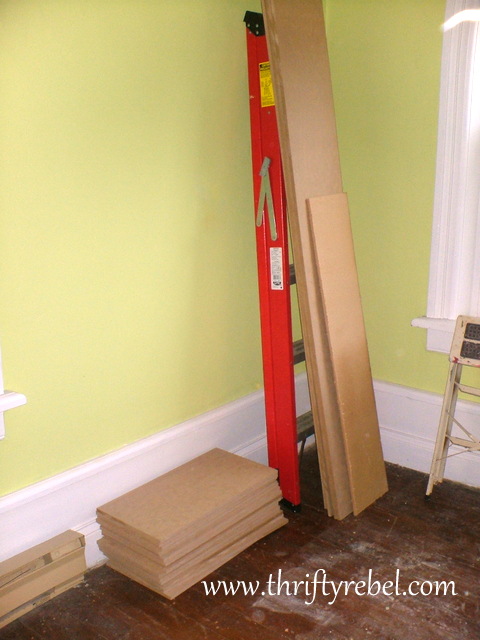 Here are my supplies. My battery powered drill, screws, a measuring tape, a level, two drill bits, a screwdriver bit, a compass, a pencil, and gorilla tape. 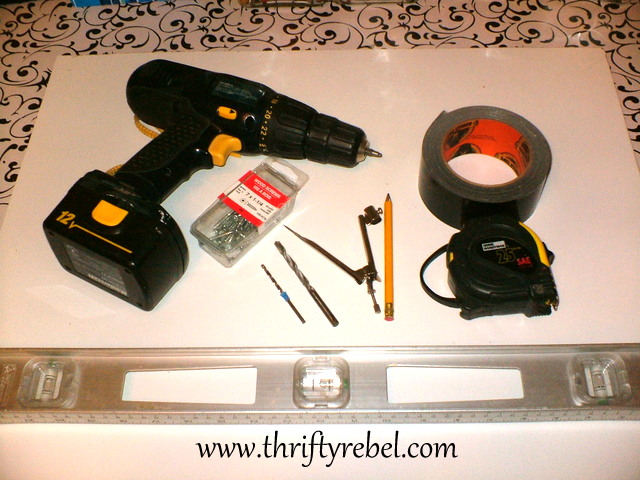 My first shelf is 3″ from the bottom, and above that each shelf is 11″ above the other. So I marked my second shelf at 14″, the third one at 25″ and so on. I did this on both sides of all four side pieces. I decided to leave one larger section in each bookcase so I could store taller things. 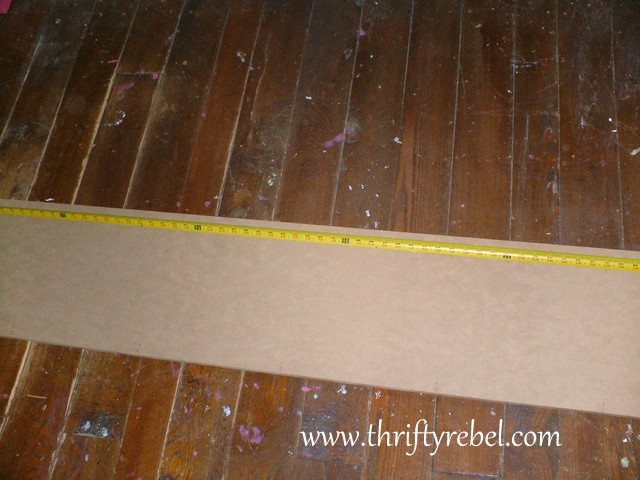 Then I laid two of the side pieces side by side (because I only had room to work with two pieces at a time) and I drew lines with pencil using the marks as a guide. I did this on both sides of all four pieces because I needed lines on the inside to line up the shelves, and on the outside to know where to place my screws. When screwing into 1/2″ MDF there is no margin for error. 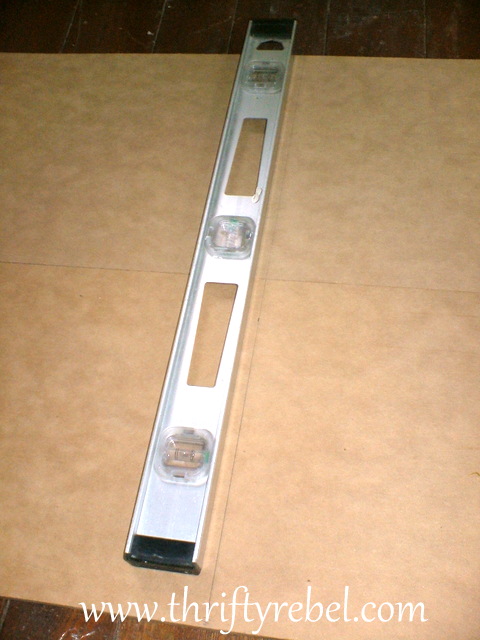 So here’s one unit with a few shelves already screwed in. My battery powered drill was no longer working at this point so now I was using just my 20 year old electric one (which I’ve never really liked). To screw into the MDF I had to pre-drill the holes before I could use the screws. This is because MDF will sometimes split if you don’t do this.

I used gorilla tape to hold the shelves in place while I pre-drilled and screwed through the sides and into the shelves (sorry but I don’t have a pic of that). I attached the top and bottom shelves first and then worked my way up from the bottom.

Being down to one drill was a bit of a pain because I had to use one bit to pre-drill the holes, then remove that bit, and put in the screwdriver bit for the screws. I did two shelves on one side at once, then went to the other side and did the two same shelves. I worked along like that until I was done. 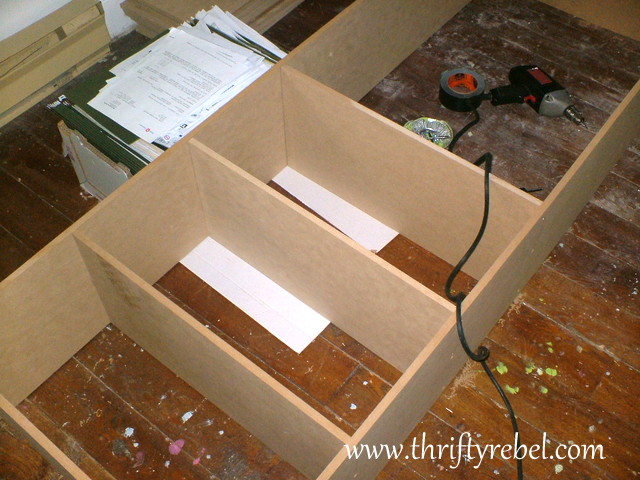 Here’s a view of the sides. I used three screws on each side of each shelf. I don’t own a countersink bit, so I used a large bit the size of the screw head to make each hole larger, but just to a 1/4″ depth. This allowed the screw heads to sink a little into the MDF. I didn’t want them sticking out. 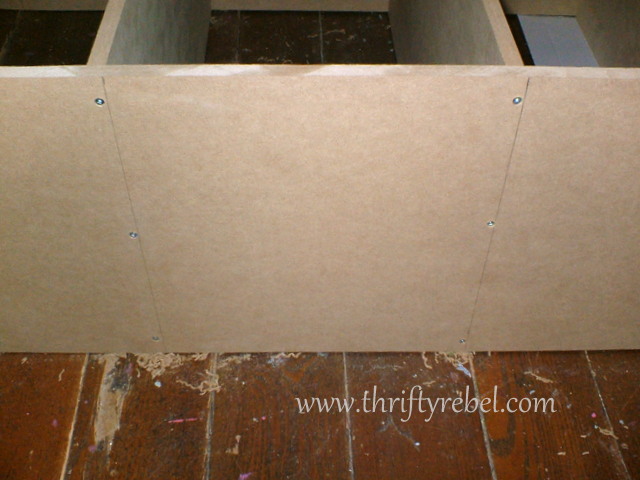 When both bookcase units were complete it was time to make them flush with the wall. When lifting each unit off of the floor to put it in place I had to be careful because they don’t have backs on them, which makes them a little unstable. I didn’t want backs because I wanted the green to show through.

I live in a house built in 1890 and my craft room has baseboard moldings that are 15″ high. There’s no way I would ever touch these moldings, so I had to make the bookcases fit. Out comes the old compass that only gets used every blue moon, but at times like this it’s invaluable.

I started at the top of the molding and lined up the compass with the gap between the wall and the bookcase. The pencil is on the bookcase side. I held the compass steady as I ran the pointed side along the molding, following its contours as I went, and making sure my pencil was marking these contours onto the MDF.

This wasn’t as easy as it sounds…when I looked at my first try it didn’t look that great , so I just tried again. The outside line was the better one. If there was a better one. 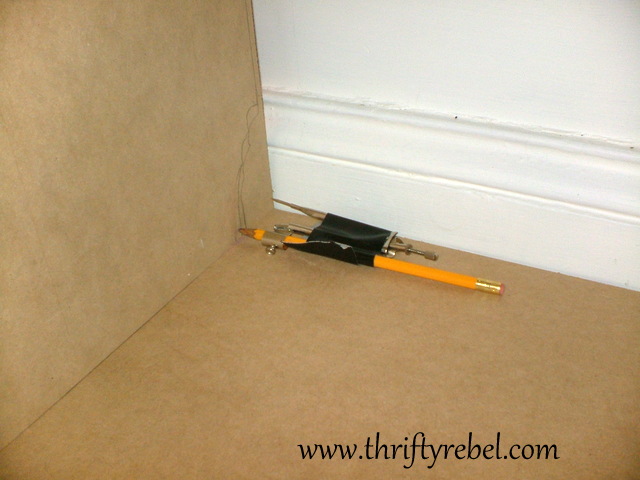 Once this was done to both sides of each unit it was time to get out the saw and the jigsaw. 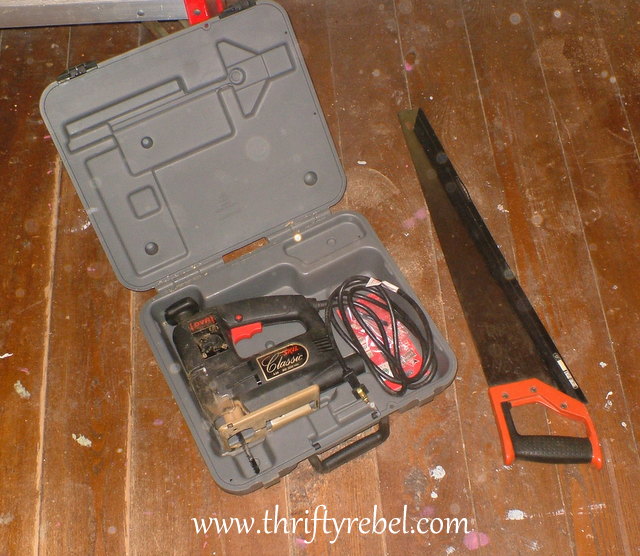 I cut out the contours using my pencil lines as a guide. Then I had to also cut the back of the shelf to match the depth of the sides so it would sit flush against the molding as well. I used my jigsaw for this, with my regular saw helping out here and there in some tough spots. 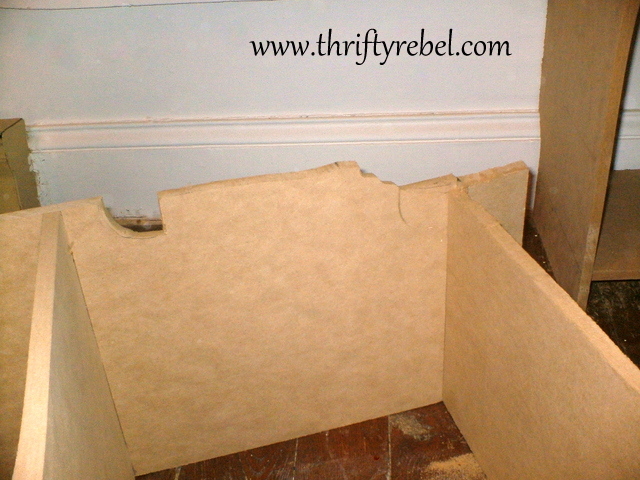 Here’s a close up of the outside unit in place. The cut wasn’t perfect, but who cares, it was nothing a little poly filla couldn’t fix. 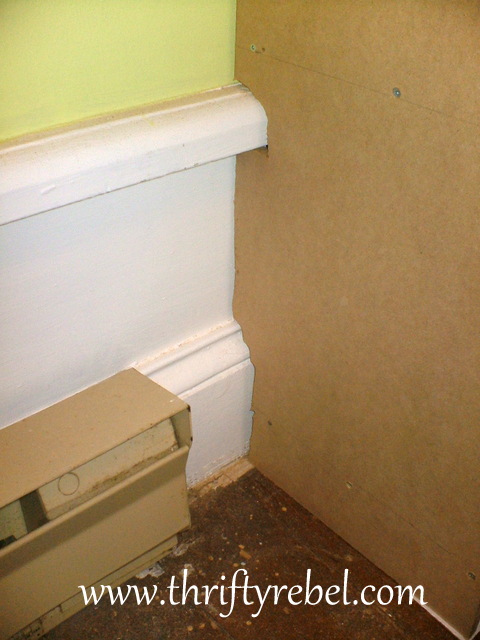 Here’s a close up of both units in place. 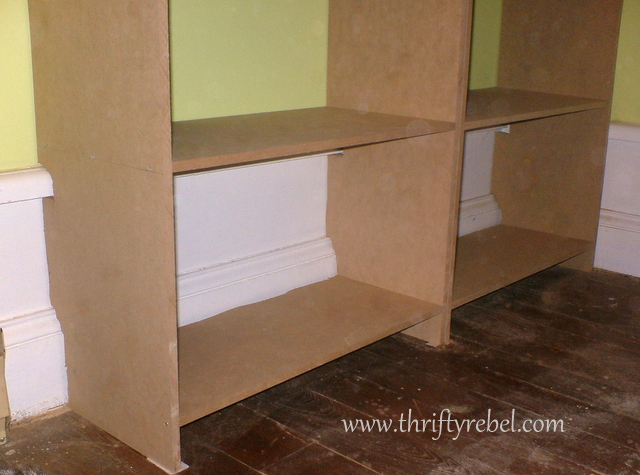 And here are my two finished bookcase units. 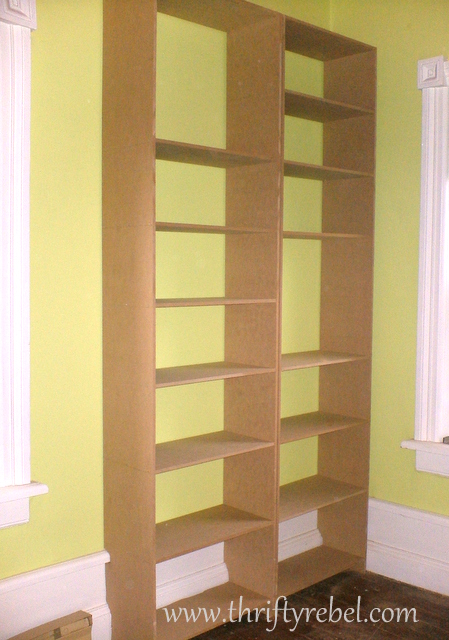 I decided to paint them white using some latex paint that I found at the Re-Store. A whole gallon for $10. A great deal! I pulled the units out from the wall for easier painting.

Here they are after one coat of primer and three coats of paint. When the paint was dry I put the units back into place and screwed them together, locating the screws so they wouldn’t be seen. I filled in the spaces where needed with poly filla, sanded, and touched it up with paint.

Then I covered the tops of the shelves with the same self-adhesive contact paper that I used on my craft room desk. This was so easy and saved me a lot of time because I didn’t bother painting them first. I didn’t see the point of painting the shelves and then covering them up. 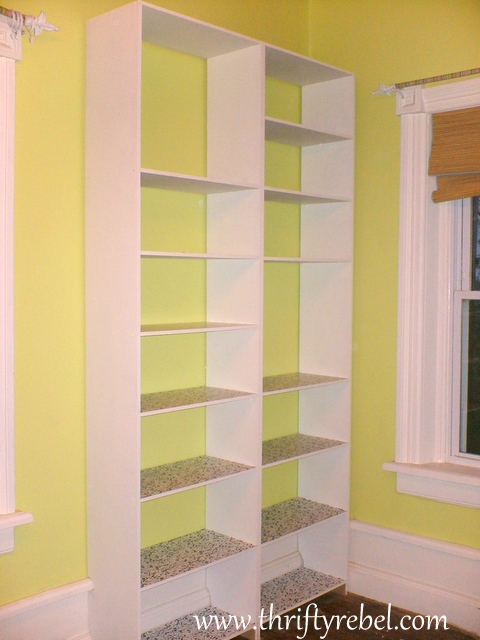 I decided to dress the bookcase up a bit with some molding. I used door case molding at the bottom and the top of the unit, and some decorative molding on the front at both sides and the middle where the two units meet. 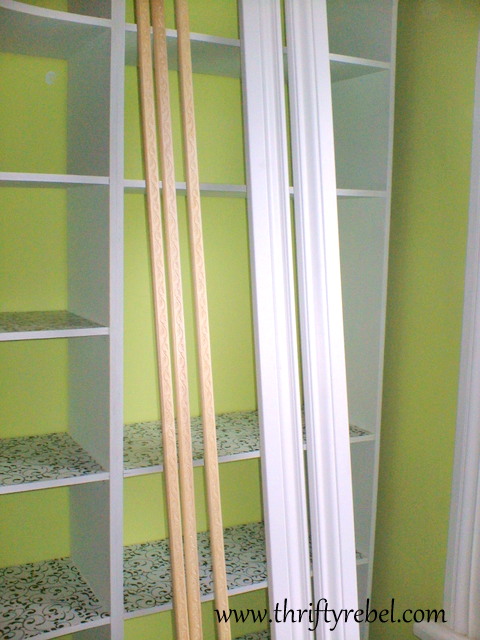 To add the molding to the bottom I simple laid it alongside the front of the bookcase and marked the length with a pencil. 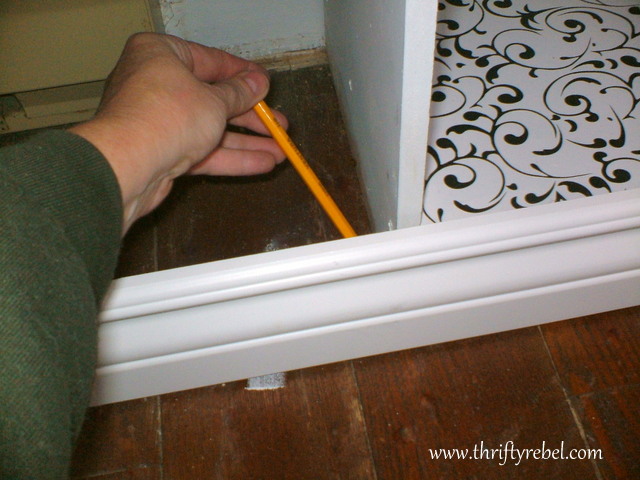 When working with mitre cuts I always mark which way I want the cut to go with a pencil. 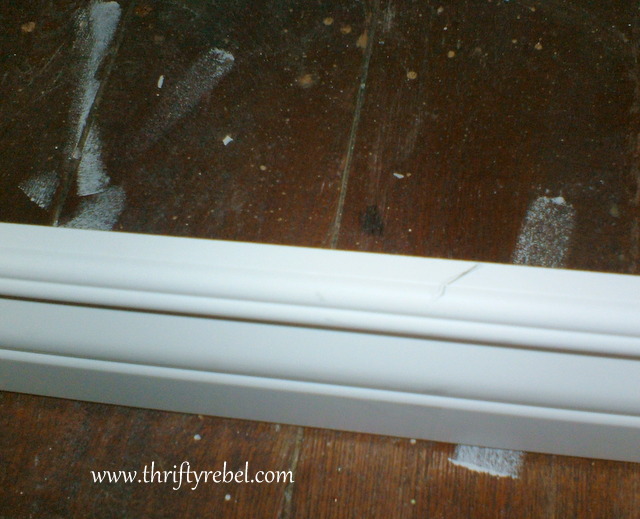 This way I don’t get confused when I get to the mitre box. And believe me that can easily happen. 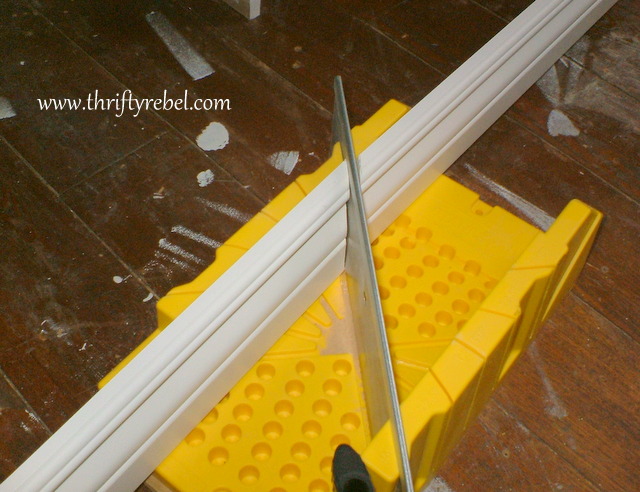 Then I did the molding for the side the same way. I repeated this for the top of the unit. I nailed the molding in place with 1″ finishing nails using poly filla where needed. 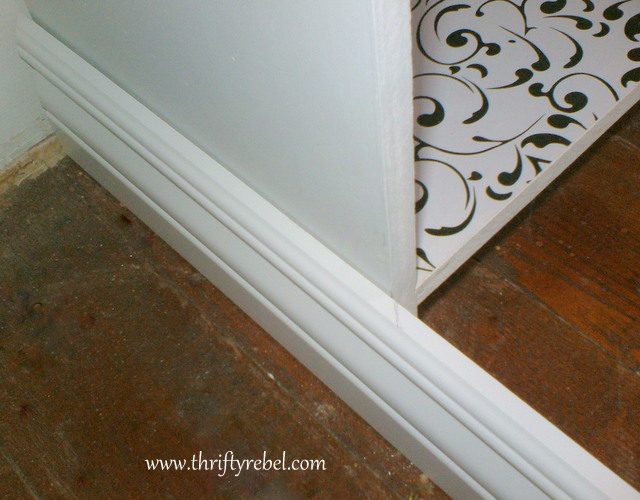 To install the decorative molding I just measured the length from the bottom molding to the top molding, cut the pieces to length using my mitre box, and nailed them in place with 1″ finishing nails. 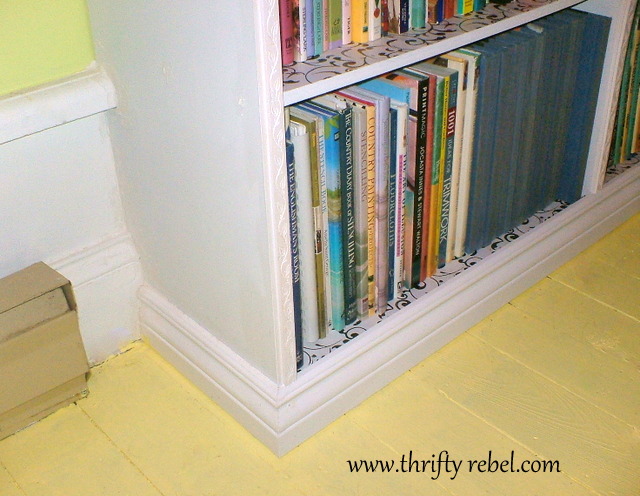 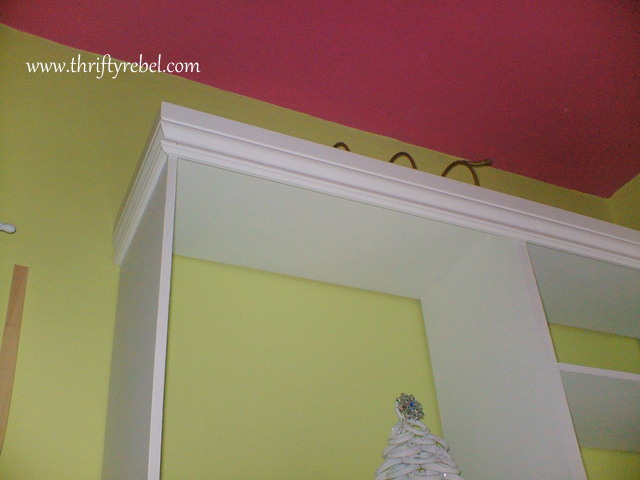 To give my bookcase more stability I attached it to the wall with small L brackets. I screwed two brackets on each of the two top shelves so they wouldn’t be seen. 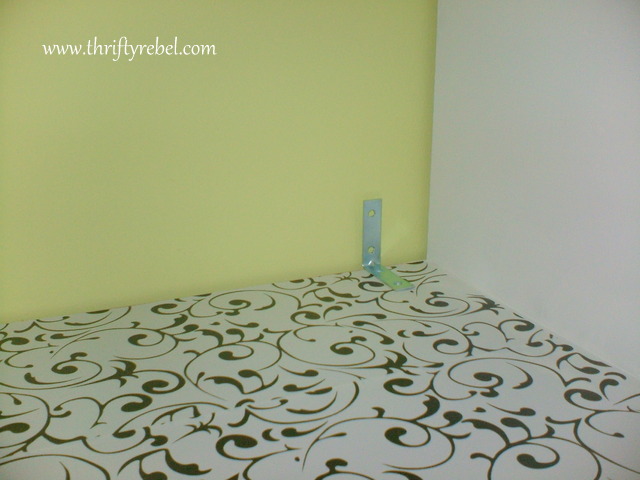 This is where my electric drill suddenly stopped working. We made a trip to Home Depot and I bought a Ridgid Lithium Ion Drill and Impact Driver set that was on sale and I just love the drill. It has a light that comes on automatically when you use it. This is an awesome feature that I never knew I was missing. I’m not sure what I’ll use the impact driver for, but we’ll see. 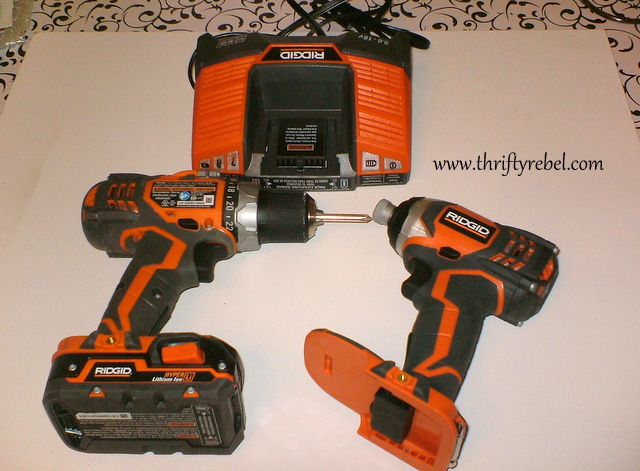 And here’s my finished built in bookcase. I added some hooks to the side so I could hang a 3 piece set of thrifted metal containers.

This is one of the longest posts I’ve written for just one project. When I was building it I didn’t realize how many steps were actually involved because I was just busy doing it.

I should definitely add that I’m no expert when it comes to carpentry, and any expert who reads this post would agree with that I’m sure. I just learn things by doing, and because I don’t always have the proper tools I just figure things out as I go. I’m one of those people who finds it difficult to pay someone to do something that I think I can do myself… and I like the feeling of accomplishment that DIY brings.

I never worry about projects being perfect. It’s so easy to touch up an ooops. If I worried too much about it, I’d probably be afraid to try anything. I think perfection is highly over rated.

To me a bookcase is just a box with two sides and a top and a bottom. It’s quite easy to add some shelves for storage to the box, and then why not add some moldings to decorate the box. It’s really that simple when you think about it. All that’s required is a little patience, OK… a lot of patience. But it’s sooo worth it… to me anyway. I love knowing that I built it myself.