Well, now all of you will know for sure too.

I know you’ve all been waiting to find out if I actually burned the old frame that I removed from the painting in my master bedroom here. 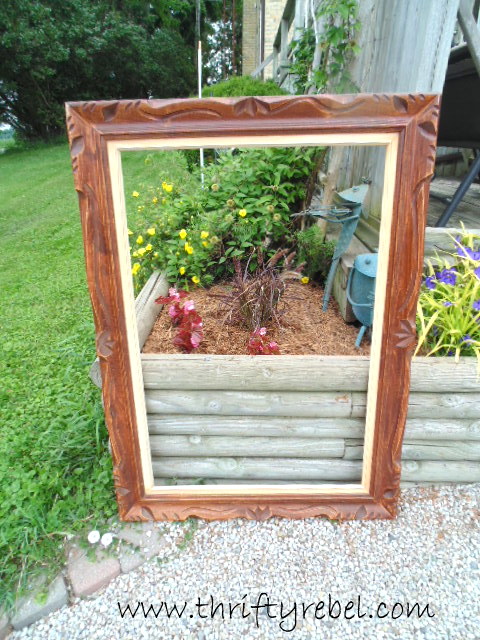 I know it’s probably been keeping some of you up at night. lol. (Um… not)

Here I am in my best I-don’t-care-if-I-smell-like-a-bonfire outfit. And my hair… where’s my long hair? Oh yes, long hair and bonfires don’t mix. 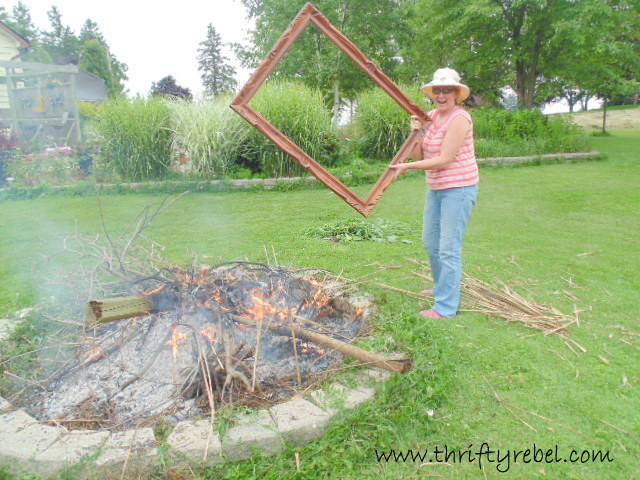 Well, I think you all knew that I wasn’t going to be able to burn the frame… but I almost did… really… and I really thought I was going to because I have sooo many irons in the project fire right now… why not a frame in the bonfire too?

I came sooo close. I think maybe I was taking the whole purging thing a little too far. Every once in awhile I get this almost insatiable urge to purge, and I go just a teensy bit crazy. Especially during a room makeover.

But just as I was holding the frame over the flames… ready to give it an honourable send off… I swear I started hearing voices. And even though I’ve never actually heard their voices I was sure that it was Danni and Donna from w-a-a-a-y across the border, thousands of miles away, saying “Don’t do it Tuula, don’t do it”. And suddenly an idea appeared in my mind, and the frame was spared from the bonfire flames.

I did remove the narrow inside part of the frame and burn that. It was totally unnecessary, and I had to burn something. 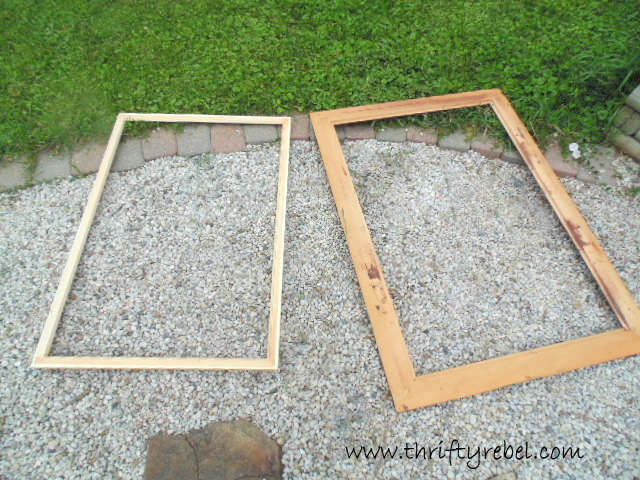 Mirror Mirror on the wall, who’s the luckiest frame of all? lol.

Lucky maybe, but it still needed a face lift… or should I say a frame lift? Sounds potentially painful, but I assure you I was gentle. 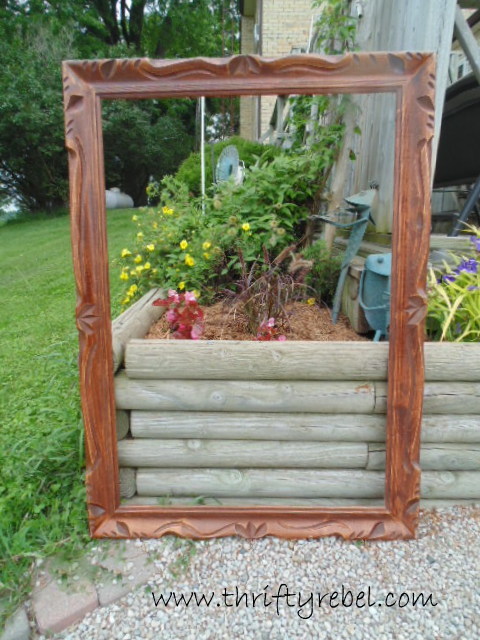 I’ve been working on my master bedroom makeover and I had already repainted a vintage mirror that started out looking like this. 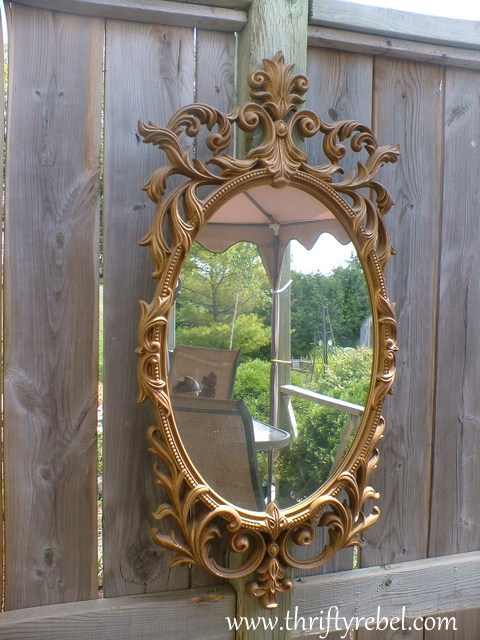 I gave it a pink and pearls makeover a couple of years ago (you can see that here). 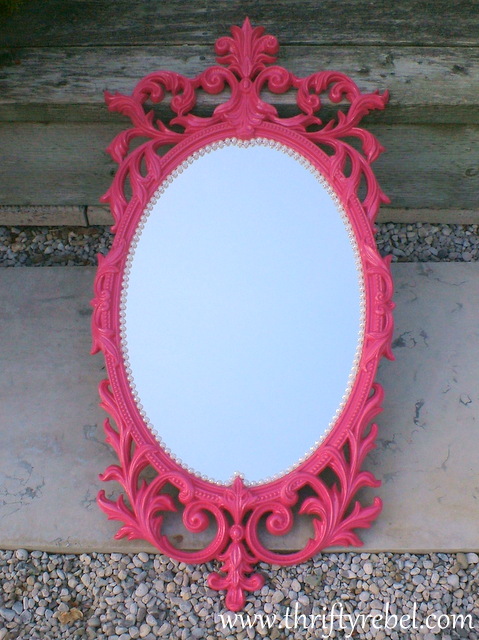 This time I used Behr’s French Rose latex flat paint. Because I’m on a very tight budget for this room makeover I only bought a sample container for $5. It’s really all I need because it’s just going to be used as an accent here and there. 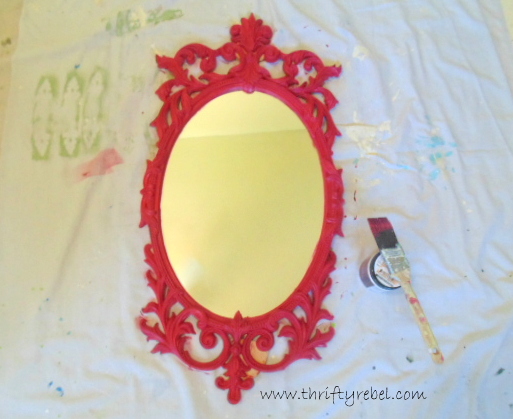 After applying two coats I hung the mirror on the wall above my dresser, but the scale was all wrong.

(Sorry, but my dresser refused to pose for this photo shoot because she wasn’t quite ready yet… so she’ll have to be seen at a later, more convenient, date. She is so full of attitude.) 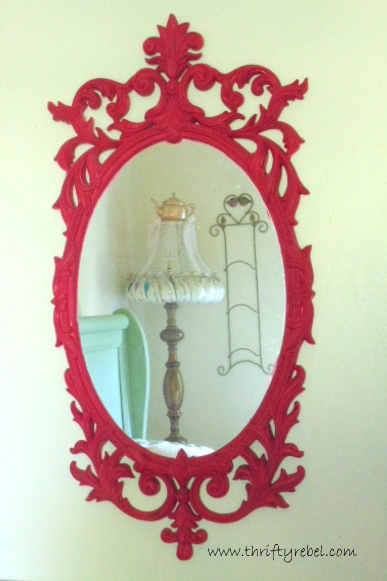 My lovely red mirror was just too small to hold its own with such a large dresser. So enter the picture that appeared in my mind as I was dangling the frame over the bonfire flames. 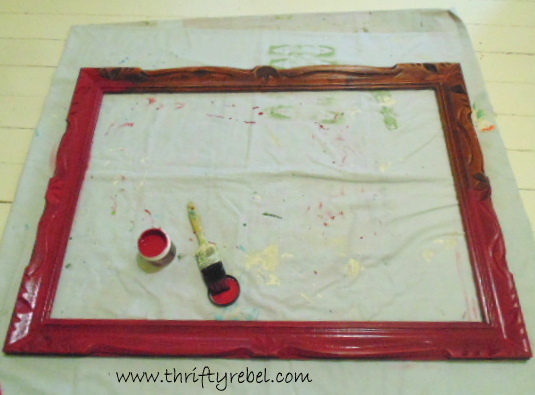 Not sure why it took an aha moment for it to come to me, but I’m so glad it did. I think what gave me the idea was Donna mentioning in an email that she liked layering things. Thanks Donna! 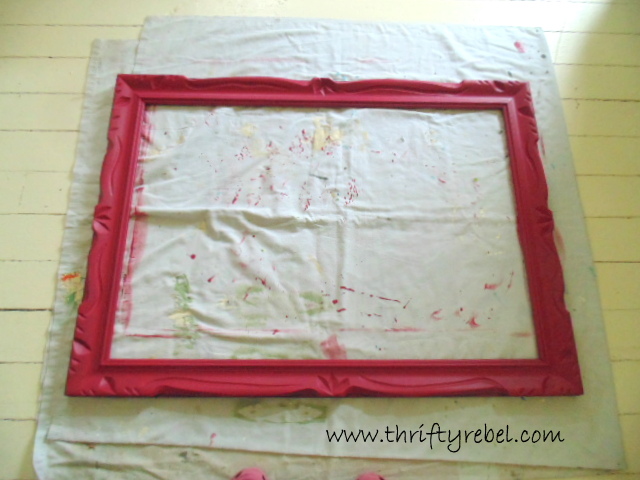 So the French Rose paint went on the frame as well… two coats of it. Then I added a coat of Sherwood Green, the colour of my sleigh bed here, on top of the red. (I could have sworn I took a pic of that but it’s nowhere to be found.)

Then I hit a bump… a big bump… that almost derailed this whole project, which would have sent the frame back on the bonfire pile. I was supposed to staple some chicken wire to the back of the frame, put some fabric behind it and then hang the mirror in the front from the chicken wire. (I did a similar thing in my craft room for notes and things here.) 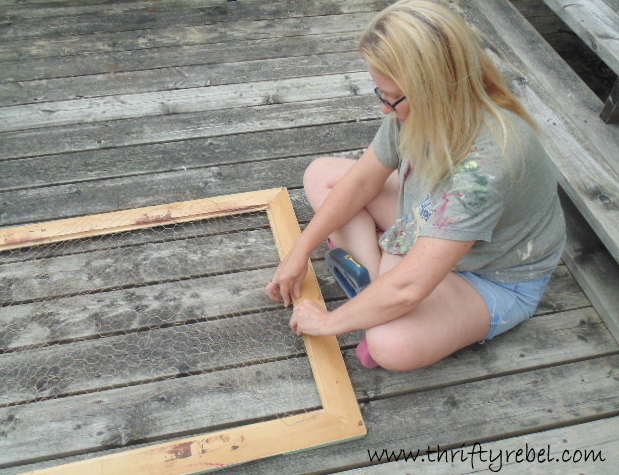 I measured the frame, cut the chicken wire and spray painted it gold. I stapled it on the one side just a couple of times (above), and when I went to do the other side I discovered that somehow I managed to cut the chicken wire too short. (Thankfully there’s no pic of my reaction to this. lol. No evidence.)

I walked away for a couple of minutes and decided to scrap the whole chicken wire/fabric thing and go for a more simple look.

What’s that saying…. “Keep it simple stupid”. Well, if the frame fits…. lol. To be honest I wasn’t much laughing at the time. 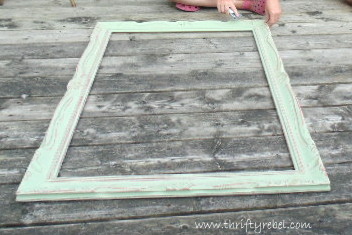 I do sometimes over think things and make them much more complicated than they need to be. Simple was all that was needed here, especially because I’m going for the simple country farmhouse look.

What a coincidence… we live in a simple country farmhouse. 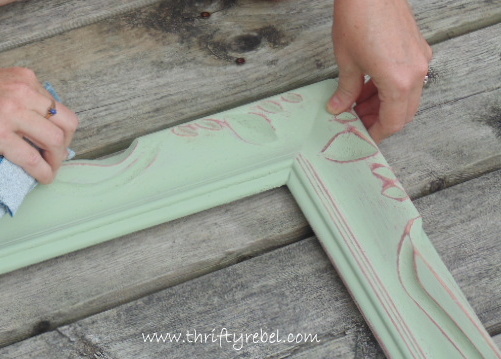 Once this was decided I felt free to go for it… and so I did. I went ahead and just sanded away… at the edges of the carved patterns and the edges of the frame itself. I didn’t even think about it… I just let the sandpaper do its thing. This let some of the French red show through and it really brought out the details in the frame.

Here it is doing its new job very nicely… framing the vintage mirror, and I have to say that as much as I disliked the frame before is how much I love it now. And that is tons!!!

It sort of echoes a window on the opposite wall and gives the room some balance. 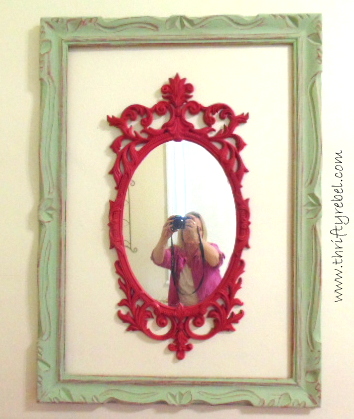 Now my pretty red mirror is an even match for my prima dona dresser, and it feels like it belongs there.

Here’s a close up, which is the most true to the actual colours. 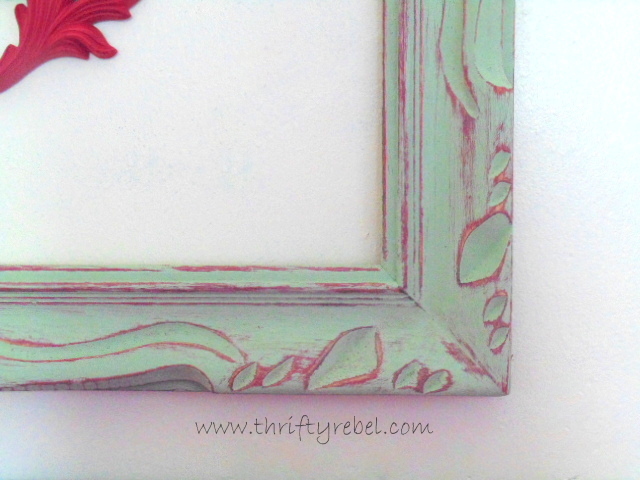 It just goes to show that just because we hit a bump in the road is no reason to throw the frame on the bonfire. Sometimes a bump is just a bump, but sometimes it might just be the answer. 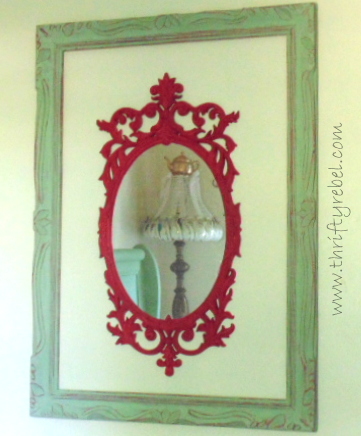 I can’t wait to show you the mirror and the frame with the dresser because they really need to be seen all together. So next up is finishing her so she’ll agree to have her photo taken. Apparently a dresser feels naked without any hardware. Who knew?

Previous Post: « How to Update an Old Framed Painting
Next Post: Clipboard of Bed Design Inspiration on HOMETALK »