Do you hear it?

If you can’t I’m sure you can imagine it.

That’s the sound of a wooden floor that’s over 120 years old. I know it might drive some people crazy, but I absolutely love that sound.

Painting an antique wood floor is a big job, so I thought I’d share how I did it. 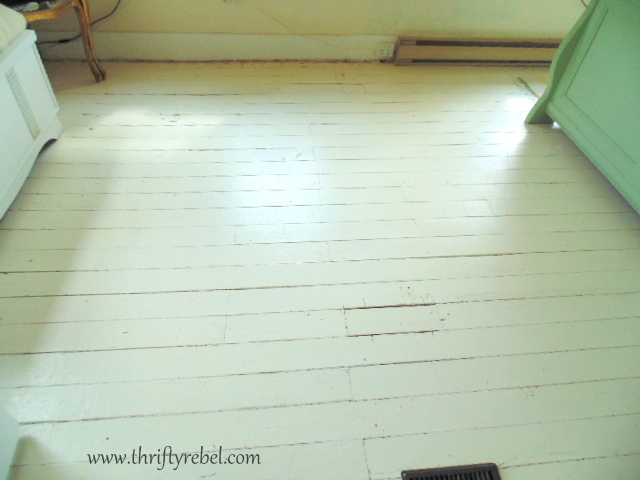 I can’t even tell you how thrilled I am that we removed the carpeting in the master bedroom. If you missed it you can read that post here.

I can’t wait to finish this room so I can move onto the hallway, but I’m getting ahead of myself here… one room at a time. 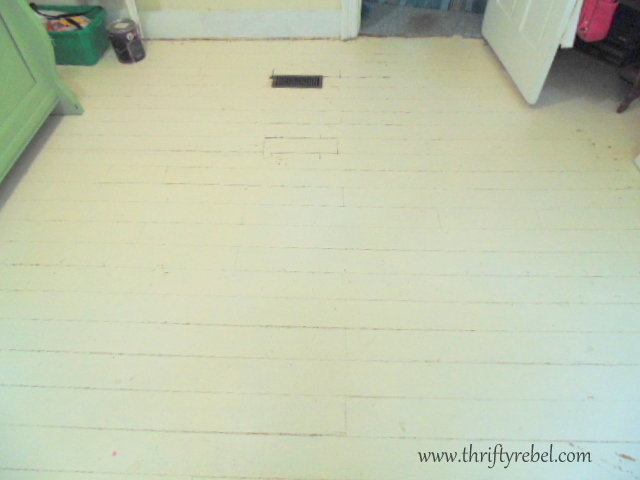 This floor had been painted by previous owners, but because it needed some repair work it needed to be repainted too. 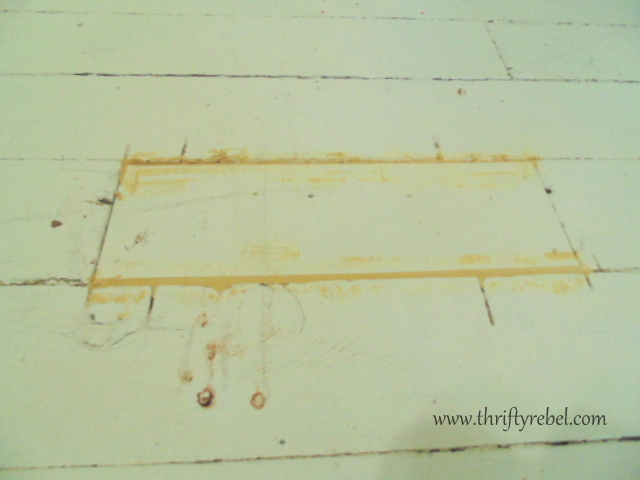 I wanted to leave as many lumps and bumps and nicks and gouges as I possibly could.

They’re a part of this old floor and this old house, and imperfection is always more interesting to me anyway.

I’m sure the floor boards were tight when originally put down in 1890, but over time gaps have developed in some areas… some larger than others. 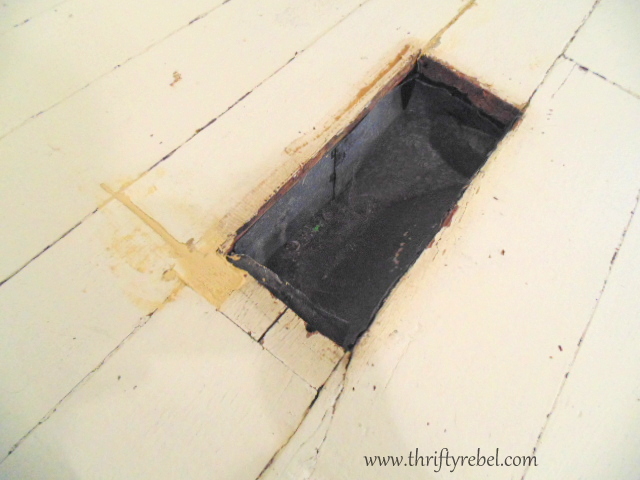 So I used some wood patching stuff (Elmer’s Carpenters Wood Filler) that I found at the Restore, but I only patched up those spots where you could see through to the space beneath the floor.

I don’t want any nasties coming out of there. lol

I didn’t worry about patching the staple and nail holes from when we removed the carpet and under pad. They’re so small and will easily get filled in with the primer and paint by the time I’m finished. 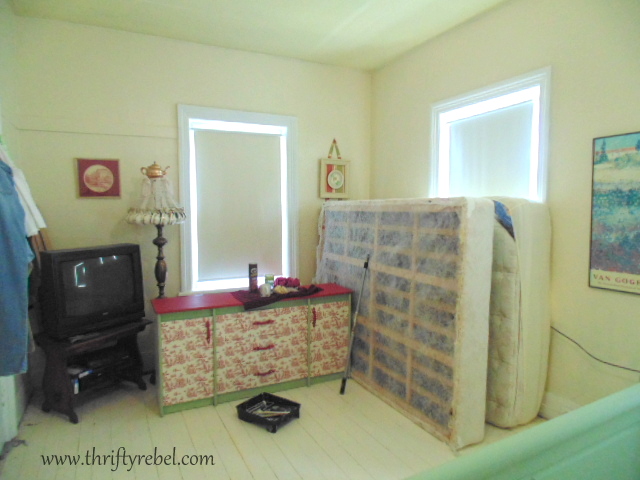 We don’t have the luxury of moving everything out of a room for a redo so we have to  move it all to one end, and then the other.

This makes for slow going, but at least it’s going. 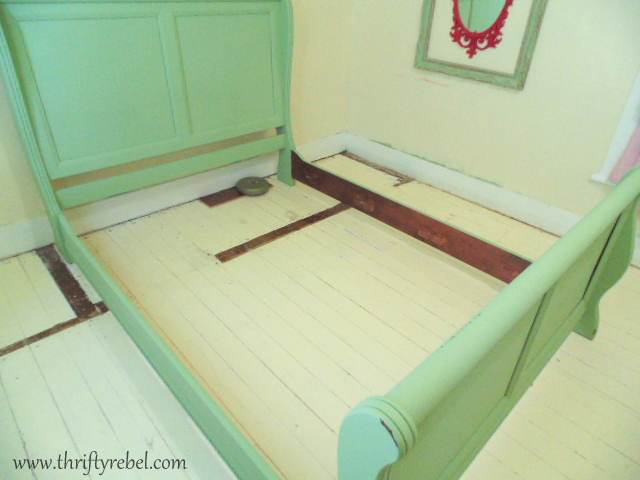 The exception was the bed. I had absolutely no interest is taking it apart to remove it from the room so I painted around it, and we just lifted it and moved it slightly when I needed to paint beneath the feet.

You can see there was a closet at this end of the room at one point. Whoever painted this floor painted around it. The closet was already gone in 1998 when we moved in.

That’s another reason why the floor needed to be repainted.

The first thing I did was give it a very good vacuuming, not just the floor but also the gaps between the floor boards.

This is not much fun, but it’s one of those prep steps that’s super important. Unless you want painted crap in your gaps for all eternity.

Thankfully the finish of the floor was pretty worn so I didn’t have to do any sanding. This saved me a ton of time, mess, and sweat. 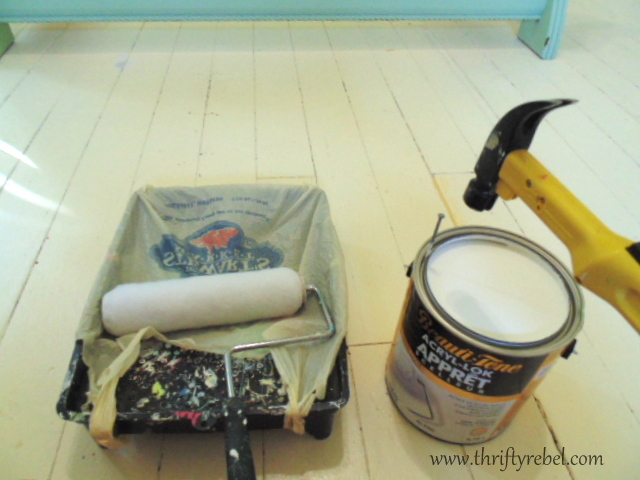 The first thing I do with a can of primer or paint is hammer some holes into the rim so there’s drainage back into the can. I usually do about 5 holes around half of the can.

I always line my paint tray with a plastic grocery bag for easy clean up. If you use this tip make sure to turn the bag inside out so any dyes from logos won’t affect your paint.

You can see more of my painting tips here. 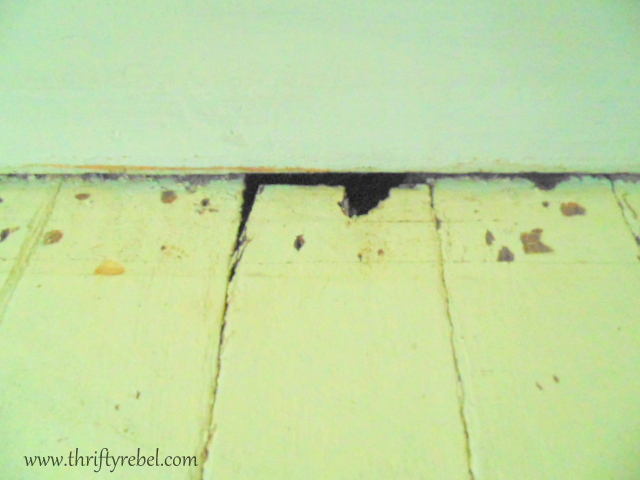 Here’s a large gap that I found when we removed the carpeting.

It’s too creepy, but the floor board was still solid. 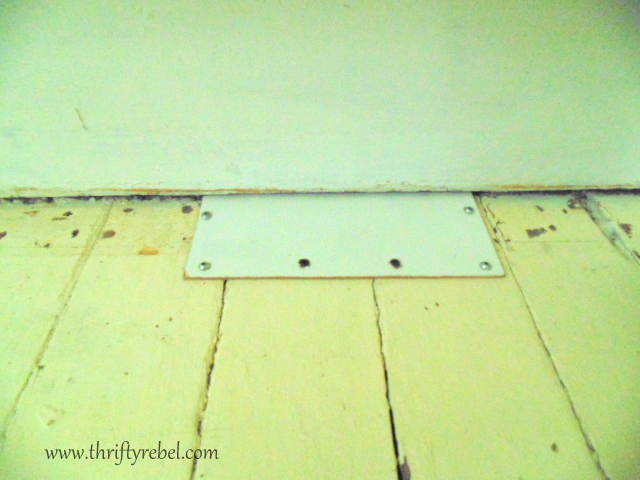 I simply screwed a spare piece of masonite over the gap, making sure to push it under the baseboard molding a bit.

No nasties are coming through there now. Whew!

This spot is behind the bed so it won’t be seen. 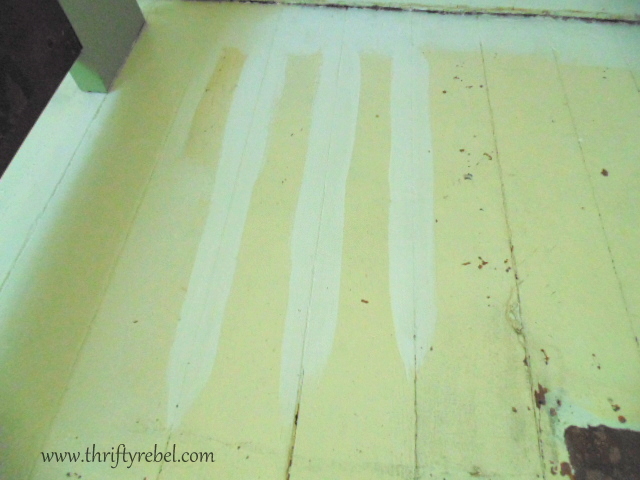 So I started with the priming.

I used Beauti-tone Acry-lok Primer Sealer. It’s a heavy duty primer/blocker that’s water based. No more yucky oil primers for me. I stopped using them years ago because that stuff is nasty, and I have an aversion to oil paint/primer of any kind because of the fumes they give off, and can continue to give off long after the project is done.

I have sinus sensitivity issues so I will never use oil for interior jobs, but that’s a personal choice. There are many water based products these days that are just as effective as oil for most applications.

Every old floor finish may be different so I would suggest checking with wherever you buy your paint before you choose your primer/sealer. There are even different water based formulas. All I can say is that this one works great for me.

When I’m painting an old floor I usually spend most of the time on my butt. It’s just easier for me that way. I start by going over the gaps with my paint brush. This is the best way to be sure that there’s enough to cover the gap, but not so much as to fill it up.

Too much dried primer and paint in your gaps might cause cracks to happen over time. 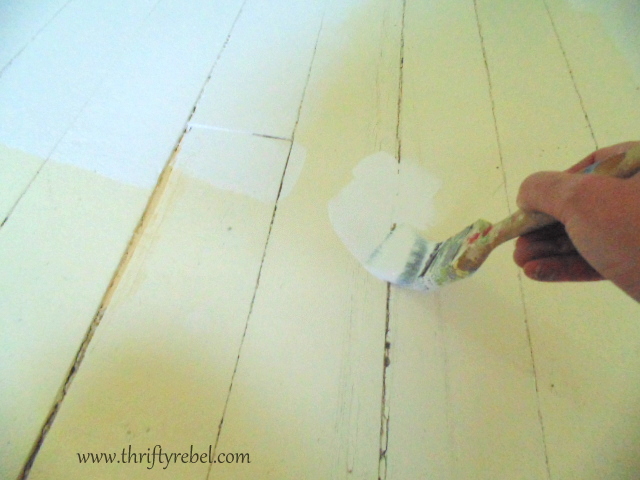 Where there were larger gaps a criss-cross technique works great to work in the paint.

When I was finished a section with my paint brush I used my paint roller to finish it off, and then I moved on to the next section… and so on until I was done. 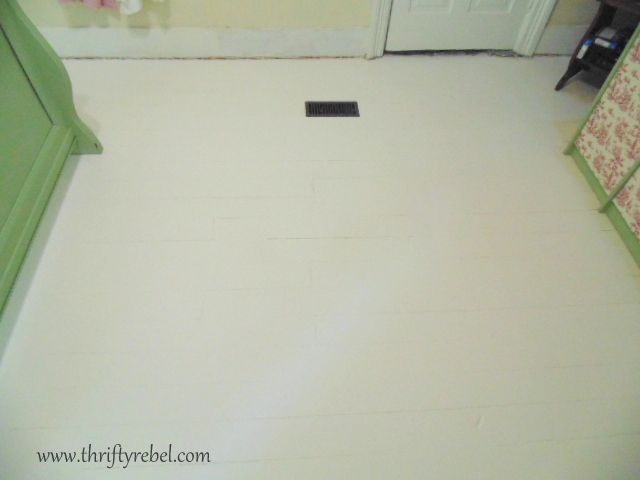 This primer only required 8 hours to dry, but I waited a full 24 because it was pretty humid when I was doing this. The second coat was done completely standing up with my paint roller, and it went much faster. 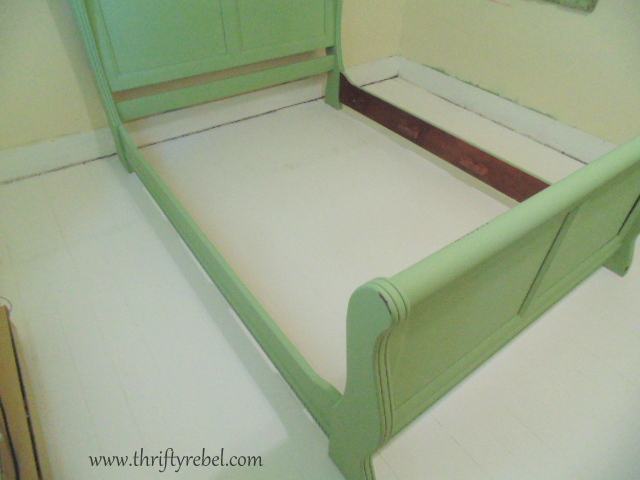 Above is the floor with two coats of primer. 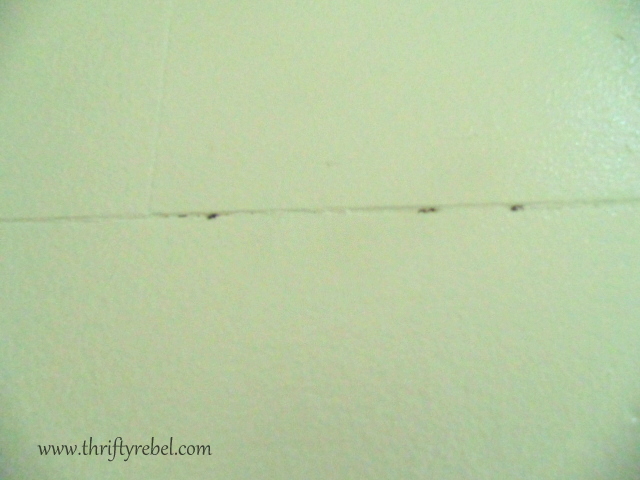 This is what you might get when there isn’t enough primer or paint in the gaps. This pic is after the 2 coats of primer. Dust and dirt will collect in those little open spots if they don’t get filled in so when doing the painting it’s important to check carefully to make sure there’s enough coverage.

Once the second coat of primer was dry I applied two coats of paint using the same process as explained above. I used the same Behr Rattan Cream paint/primer combo that I used on the walls because I had enough to do the job, and the floor actually looks like a slightly different colour because the light hits it differently than the walls.

It’s extremely durable, and we’ve been living with the painted floor for about 2 months now and it’s holding up great… especially because it’s being used as the work area for other projects for the room.

In the photo below you can see the stages… the original floor, the white primer, and the new paint, which is a little less yellow than the original colour. 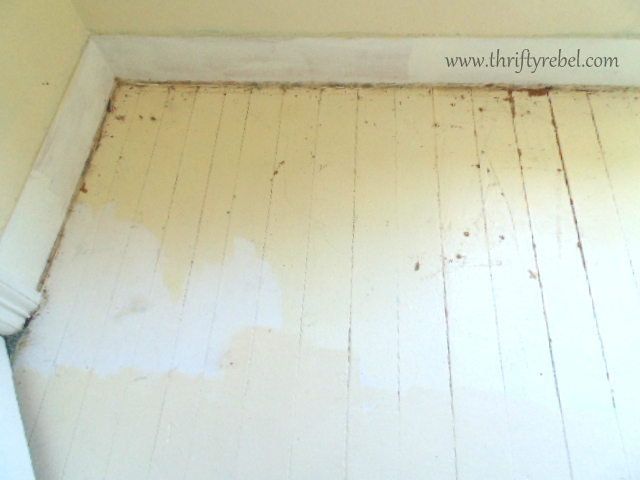 I’ll be sharing the finished floor when I show you the treatment I’m doing on it, but first I have to get a few other projects done.

Like these freebie dump finds… bi-fold doors that I’m repurposing. I was super excited when I found 3 pairs of these doors at the same time. They’re stained dark on one side and untreated on the other. I’m in the middle of this project right now. 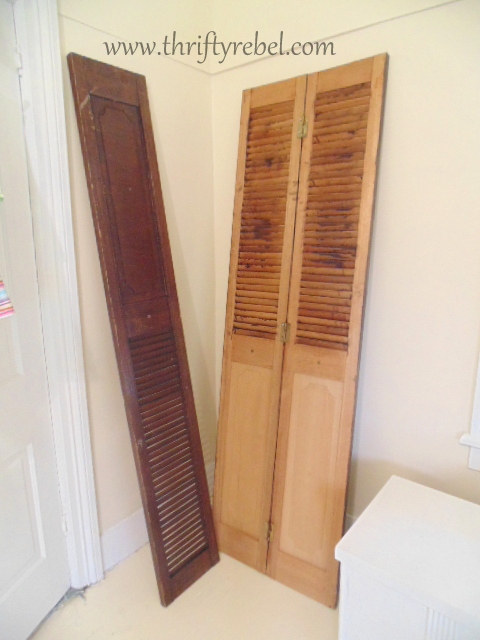 Here’s an example of a before and after just in the heat vent area. It gives you some idea of what a big difference it made to repaint this floor. 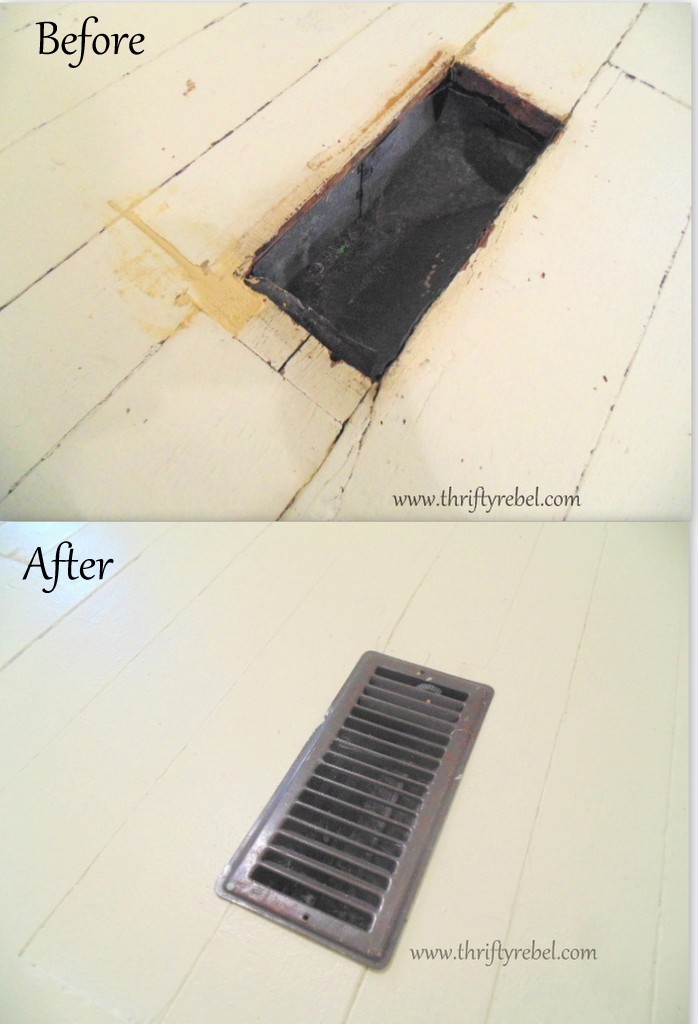 So after all that work I’m still thrilled that we removed the carpeting in the master bedroom. We both love it and it’s made me fall in love with this perfectly imperfect house all over again. It’s reminding me of why we bought it in the first place 16 years ago, and it makes me wonder why we put the carpeting down in the first place.

Often times the practical thing is not what makes our hearts sing.

Thanks so much for reading.

Do something to make your heart sing today… and smile.

Hey there, I’m Tuula, and welcome to Color Me Thrifty. My blog is all about sharing affordable DIY home and garden projects that will help you create a home that smiles with a budget that doesn’t make you frown. You don’t need a lot of money to create a home that you love. Read more here.

39shares
This web site uses cookies to ensure you get the best experience on our website. Learn More