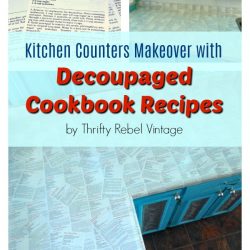 This kitchen counter makeover was a must for 3 reasons: there’s no money in the budget for new counters, there’s nothing really wrong with the counters except I don’t like the way they look, they are in perfectly usable condition, and I detest taking perfectly useable things to our landfill site.

So after thinking about it for a while I knew exactly what I wanted to do. I could picture the end result in my head but I was having trouble finding what I needed to recreate that picture in real life.

Then John and I took a thrifting trip a few weeks ago and, lo and behold, he found exactly what I’d been looking for and he knew it before I did. 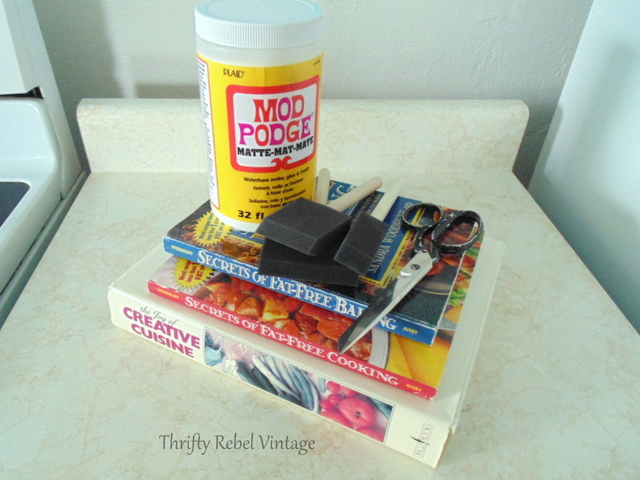 See that large Creative Cuisine book. John found it in a small town Salvation Army thrift store, and when he first showed it to me I said it wasn’t right because it wasn’t vintage enough. This edition is from 1985. I was specifically looking for vintage cookbooks with white pages, and I was having no luck at all. 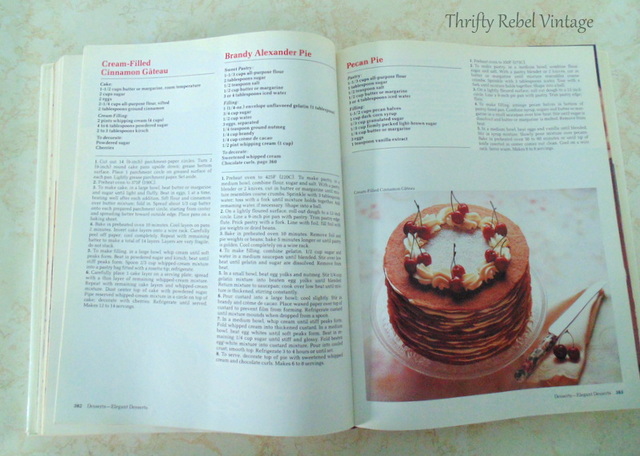 And John said, and I love him dearly for it, “But the recipe headings are red, and I think they’d go with the red in the kitchen”.

“Hmmm”, I said thinking about it. And very quickly his fabulous idea grew on me as I flipped through the pages. “Yay!” I said.  “Let this project finally begin!”

I was so excited!!! And I couldn’t wait to get started!

What a fabulous hubby I have, if I do say so myself. 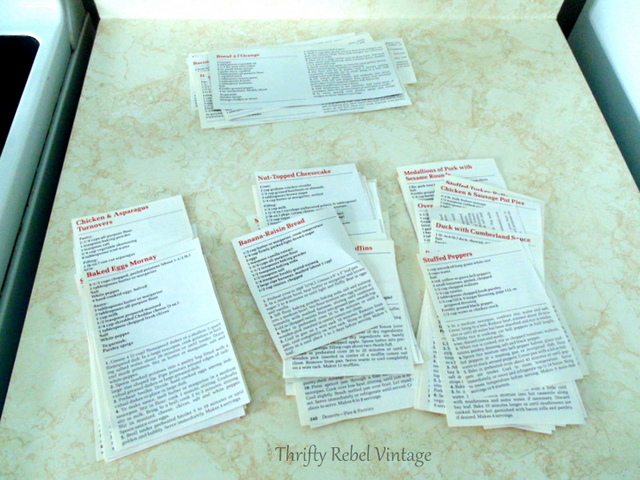 That night while watching television I cut hundreds of recipes out of that book.

I divided the recipes by size and type such as baking and desserts, entrees, and soups and salads. I also had a pile of favourites, which would be used on top. 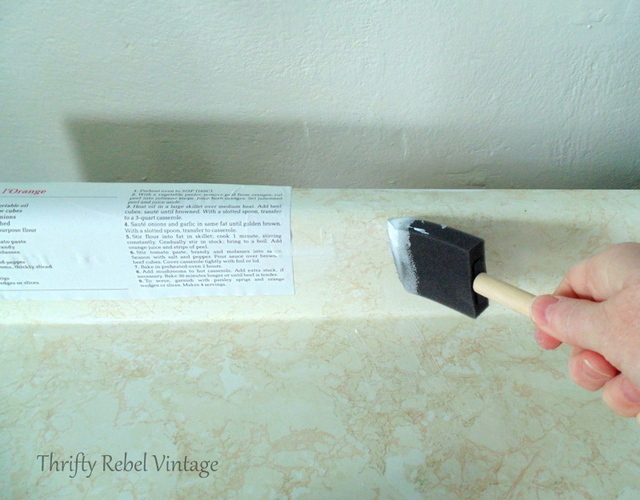 And just like when I painted the kitchen cupboards I started with the small unit between the fridge and stove.

I applied some mod podge onto the counter, starting with the back. 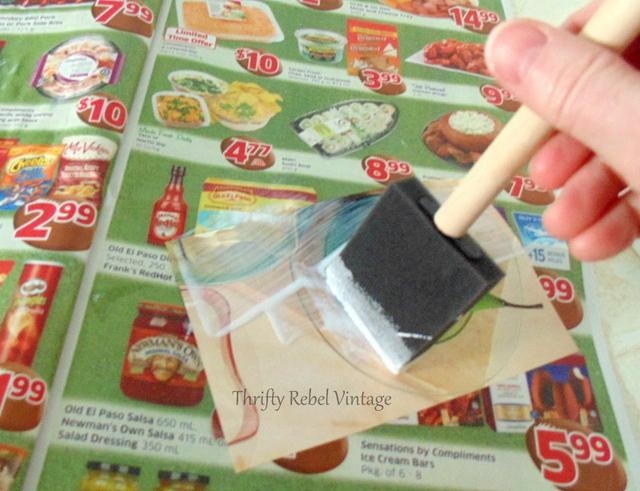 Applied some mode podge to the back of the recipes. 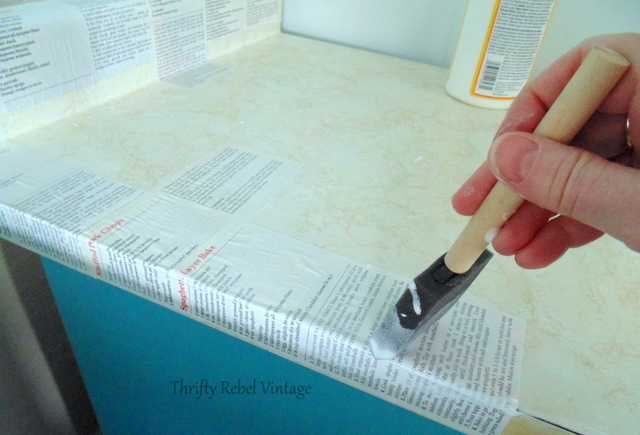 Put the recipe  in place, folding down the sides or back or front (depending on what I was working on), and then applied some mod podge on top. 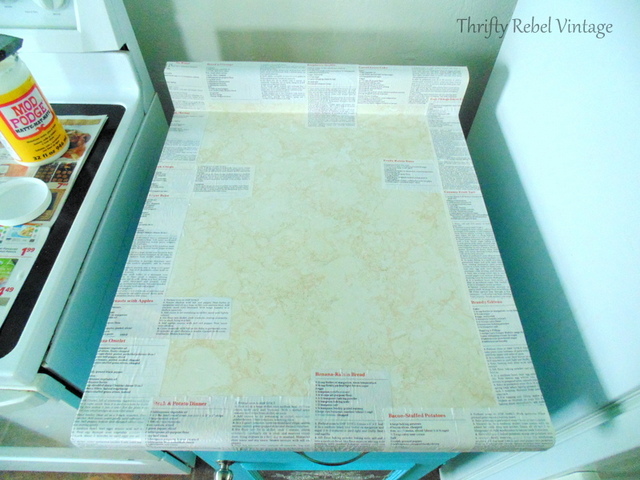 I did the outside edges first and then worked my way in. 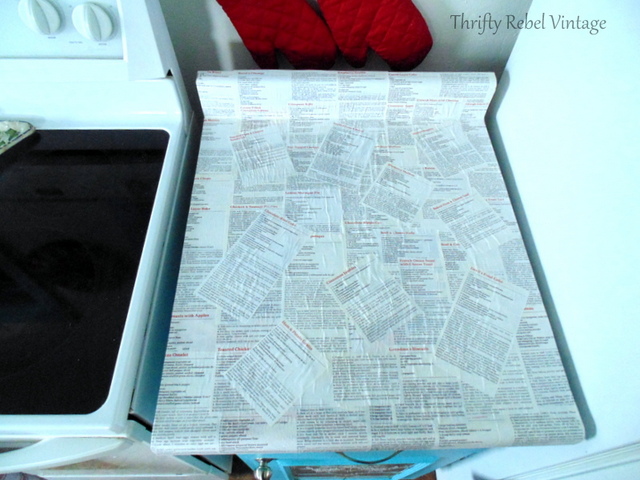 When the base was done I applied some of my favourite recipes on angles on top just to add some interest.

Looks pretty wrinkly right now, but most of the wrinkles disappeared as it dried. I did try to smooth out the recipes as best I could, as I put them down, with my fingers and with a brayer. 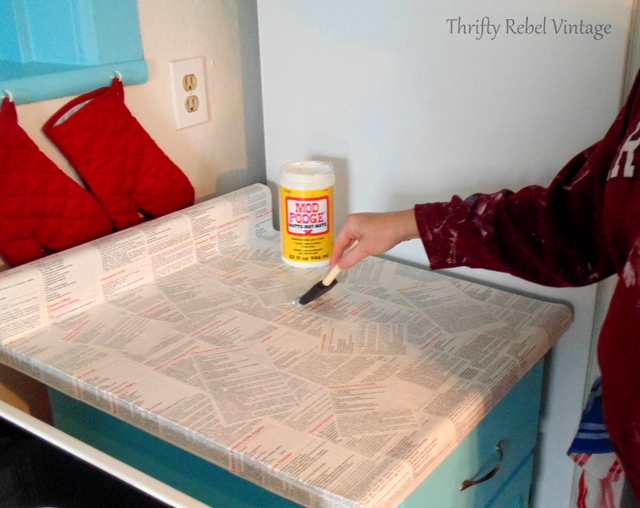 I did a coat of mod podge all over. 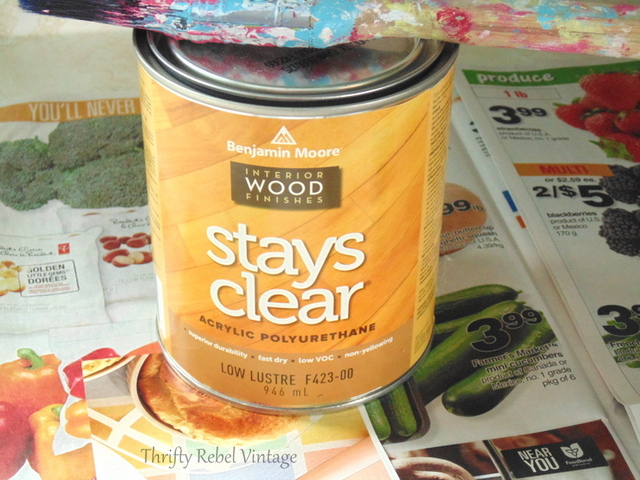 Stays Clear Polyurethane is what I usually use for these kinds of projects because it doesn’t yellow. 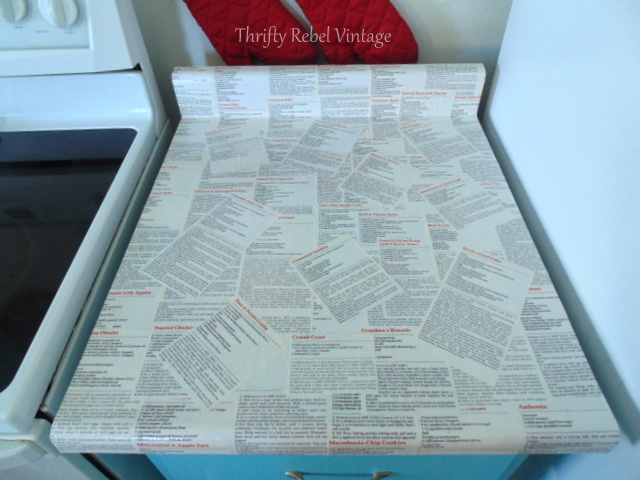 Here’s this little counter all done. You can see how the wrinkles have disappeared, most of them anyway. There are still a few, but after four coats of the Stays Clear you really don’t notice them at all.

But with 4 feline friends I can’t promise that there isn’t the odd cat hair in there though. lol. Saved for posterity.

Here are some pics of the other counter areas.

Kitchen Counter Makeover Before and After Pics 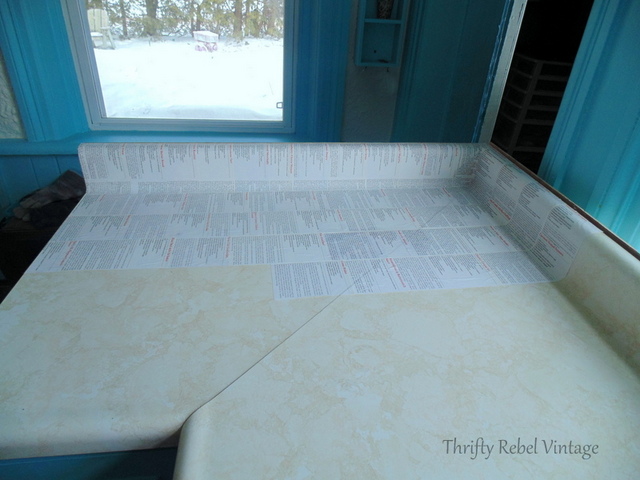 Here’s the large corner cupboard counter during the makeover. 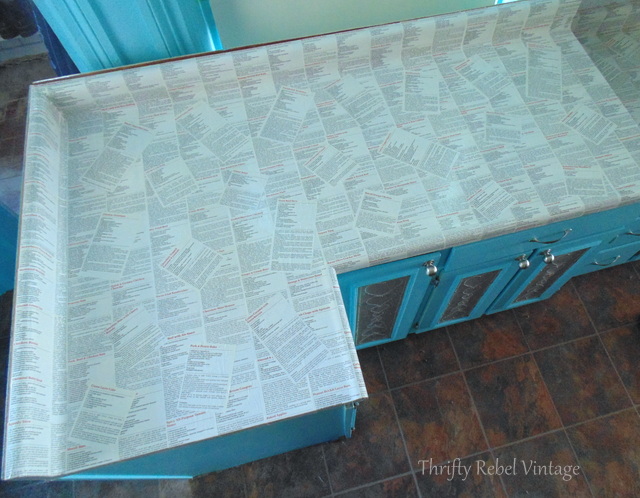 And after. I should have counted the recipes that I used on this.

Just like on the little cupboard, I angled some favourite recipes on top for fun and if I ever want to make one of them the recipe is close at hand. 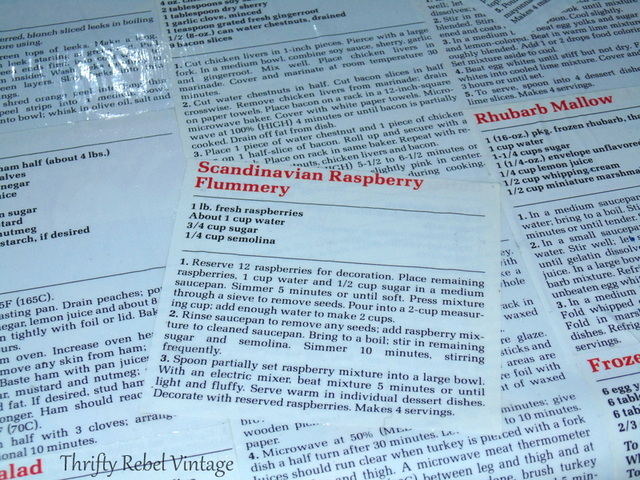 Like this Finnish pudding recipe that my mother used to make when I was growing up. I just might have to make it some day myself. 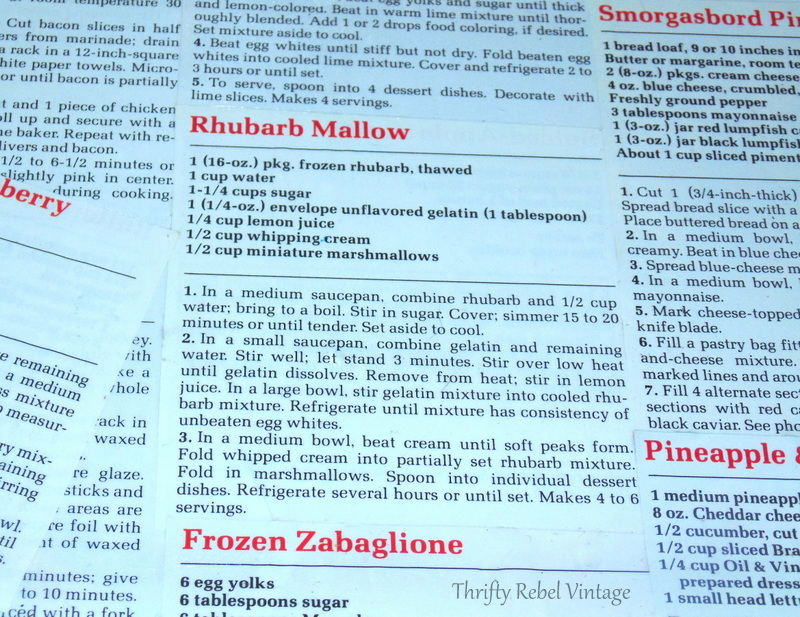 I had a reader ask me for the Rhubarb Mallow recipe that she could only see part of in the Raspberry Flummery recipe picture, so here it is. This picture was taken in October 2018, and I decoupaged my counters in February 2017 so I think they are holding up very well. 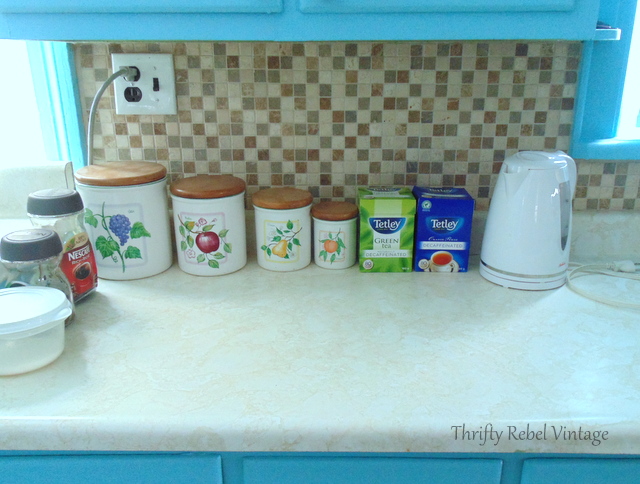 Here’s one side of the main counter before. 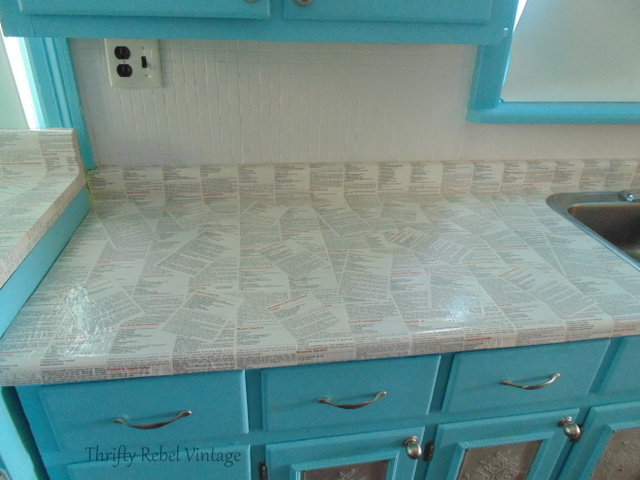 And the after, with the back splash painted white.

This is just the first stage of the back splash makeover, which I’ll be sharing later this week. 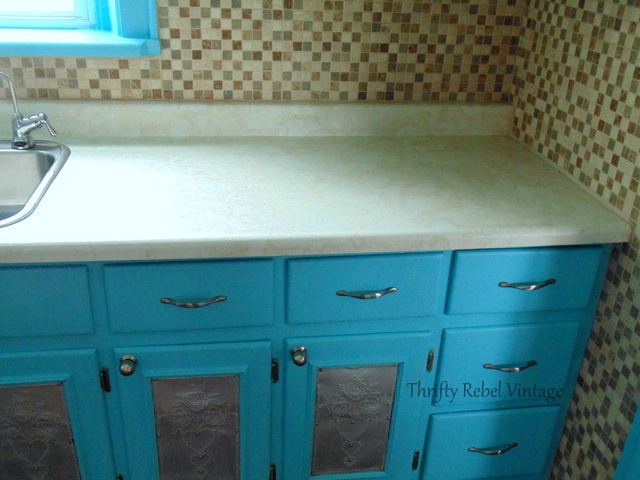 Here’s the counter before on the other side. 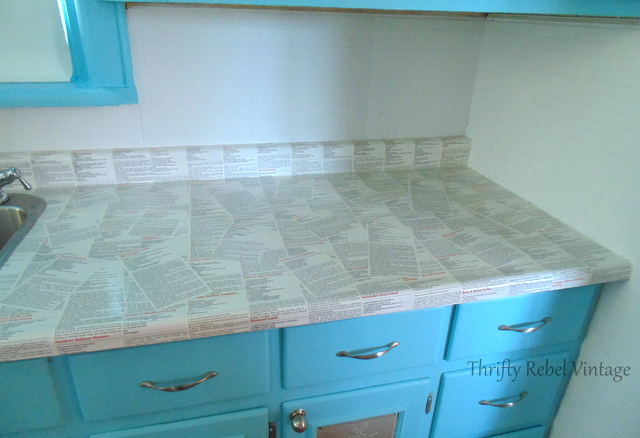 And here’s the after.

I’m particularly happy with how the sink area turned out. 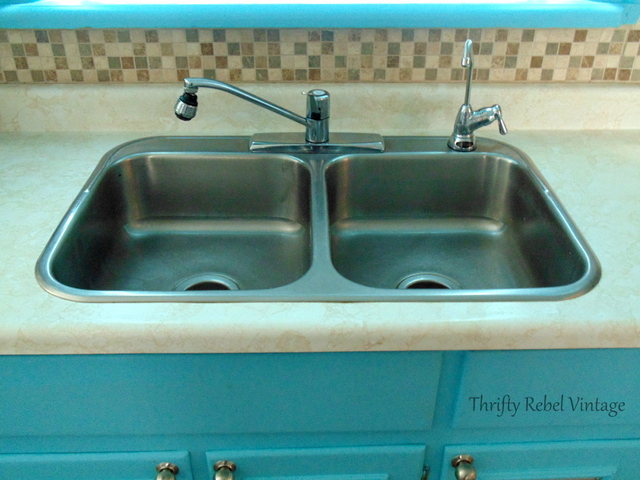 Here’s the counter before. 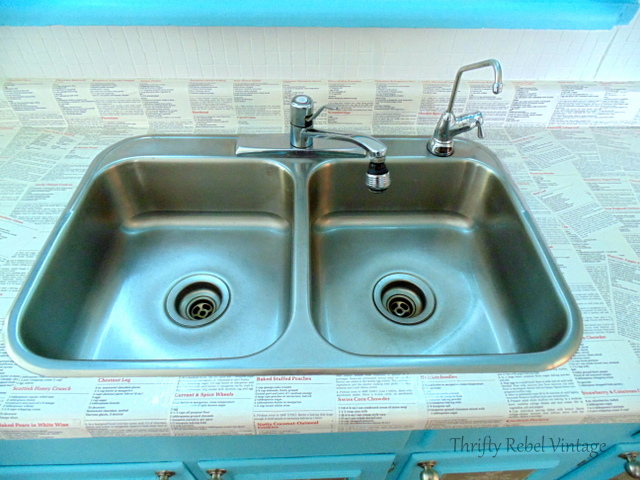 We don’t have a dishwasher, and we do the dishes by hand, so I ran a very thin bead of clear silicone waterproof caulking all around the sink to protect my counter from any water splashes that might seep underneath the sink edges and into the paper that I slid under there. 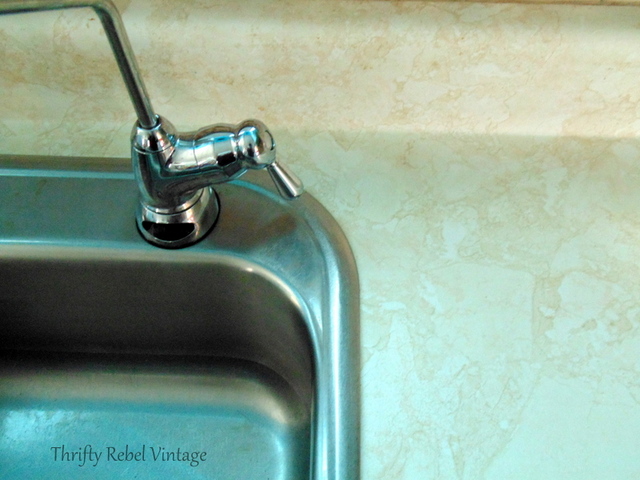 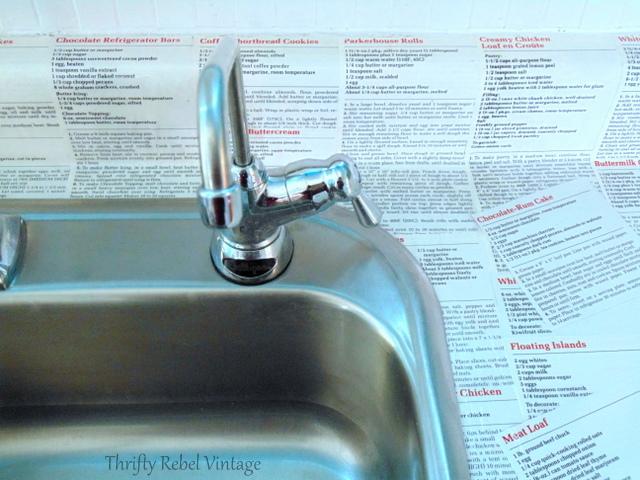 To get the paper under the sides of the sink I slid a very thin knife in to make some room and slid the recipes under. It worked like a charm.

Please note: I’ve included affiliate links for products in this post. If you purchase products by clicking on one of the links I’ll receive a small commission of any sales, but it doesn’t cost you a penny more. This affiliate money helps to keep TRV going, and I thank you so much for your support. Read full disclosure here. 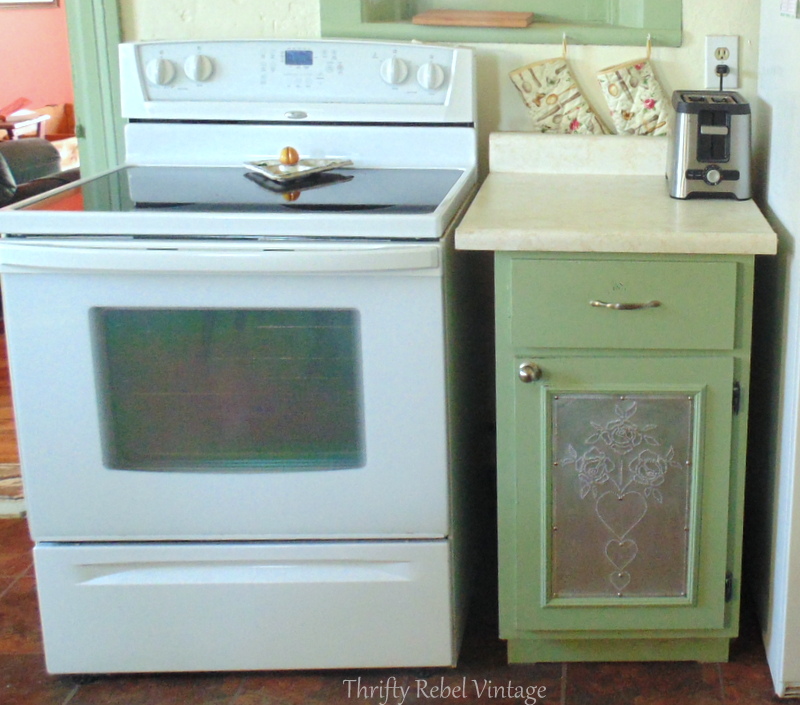 So here’s the very green before of the small cupboard. 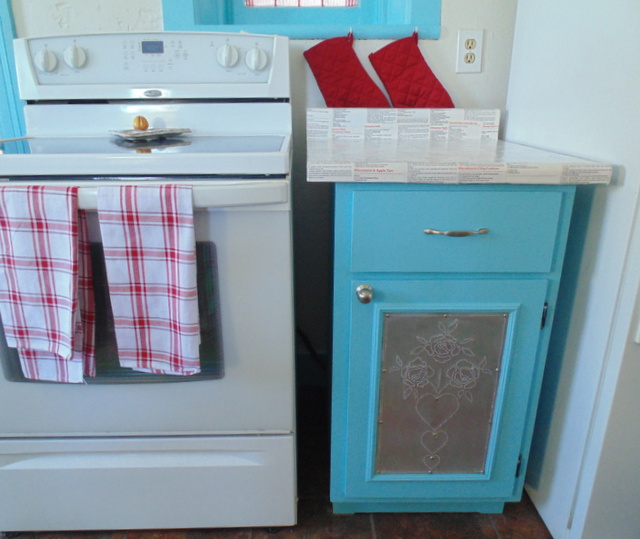 And the after with my newly decoupaged counter top.

I’m thrilled with how my kitchen counter makeover turned out, and I have my wonderful hubby to thank. 🙂

The recipe book cost $4 and I had plenty to do all the counter tops, so this was a very inexpensive makeover. I already had the mod podge and the Stays Clear. The book might not have been vintage, but my counters definitely were, and they look so much better now.

It took about ten days to get all the counters done because I had to work in stages. The Stays Clear poly had to dry for 2 to 3 hours between each of the 4 coats, plus we had to be able to use the kitchen.

I have no idea how long these counters will last, but a bathroom counter that I painted  and polyurethaned about 10 years ago just started showing some wear recently. So I think this could work for quite some time. Of course, food should not be placed directly on these counters. Just like with any painted or poly’ed surface food safe dishes should always be used, and I also wouldn’t place hot pots and pans directly on the counters. I always use potholders or place mats.

So if you need new kitchen counters, but don’t have the budget to replace them consider giving them makeover. There are so many things you could cover them with. The possibilities are really endless, and you can save a ton of money.

UPDATE: You can now see my completed Under $100 Aqua and Red Kitchen Makeover.

Pin to your favorite board and share with your friends! 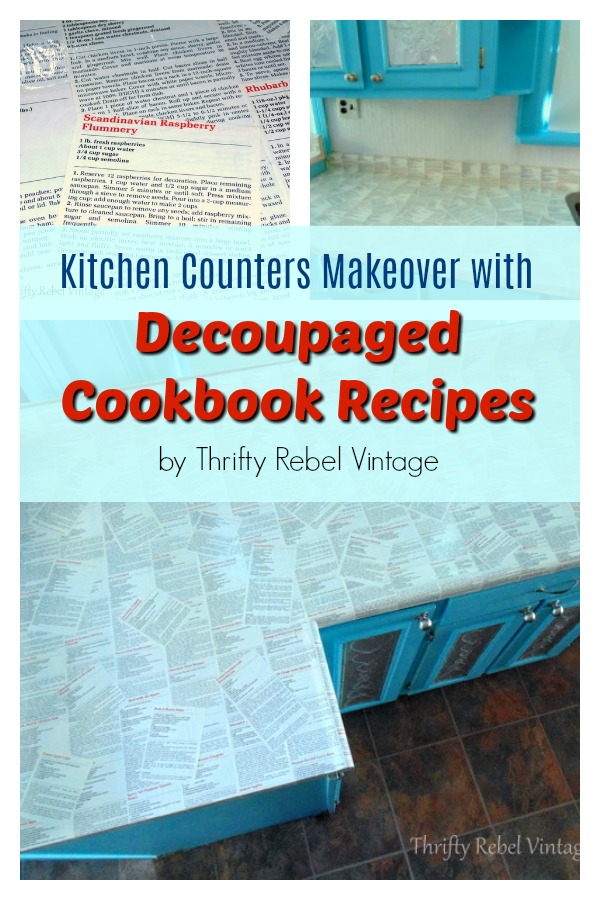 I sometimes share my projects and posts at these fabulous parties listed here.
Previous Post: « What the Heck Is It? #13
Next Post: This Kitchen Backsplash Makeover is Electrifying »