You are here: Home / General / Change Can Be Scary

…but that doesn’t mean we shouldn’t go ahead with it anyway because it can also be very exciting.

When I moved TRV, Thrifty Rebl Vintage, from Blogger to WordPress in August of 2015 I was absolutely terrified… to say the least. I thought that I might lose everything, and my blog would end up aimlessly floating out in the wilds of cyberspace… never to be seen again.

Thankfully that didn’t happen, and everything went smoothly. 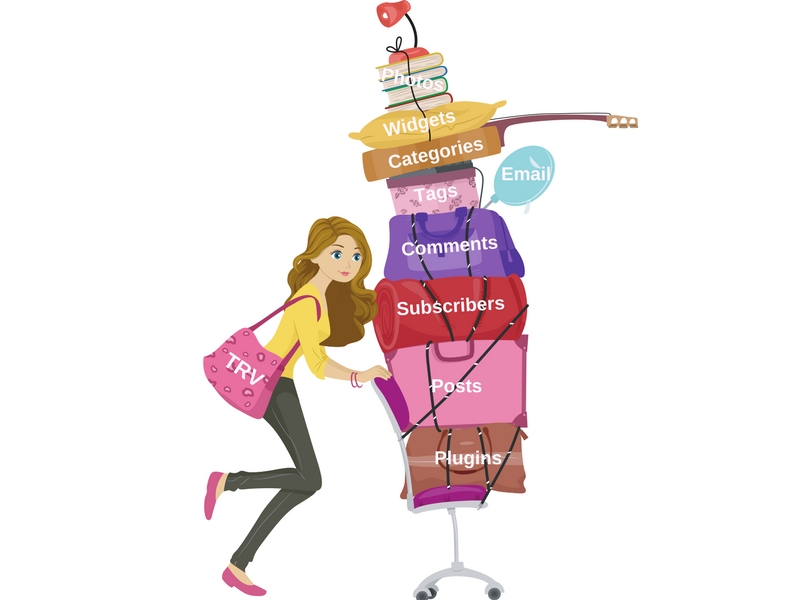 Now I’ve moved again, and once I’m settled into my new home TRV will be getting a complete from-basement-to-attic makeover.

Some of these changes will be clearly visible, and some won’t be noticeable at all, but I really wanted to keep you in the the loop about what’s happening in case you notice some changes and wonder what’s going on.

After all… you guys are my TRV family, and it means so much that you’re on this blog journey with me.

Travelling down any road is always better with friends along. 🙂

Once I finally got up the nerve I rolled up my sleeves, took a deep breath, and got started with preparing for the big move. Just like a real move I lightened the load by purging… deleting old emails and blog plugins that I wasn’t using. I only wanted to take what was absolutely necessary.

And then I took the jump… and I moved to a new hosting provider, and this time I was only a wee bit terrified. That’s progress. lol. I have to admit that a few chocolate fudge brownie ice cream cones helped.

This move should make my blog run much more efficiently.

I didn’t post any projects this week because I knew there was a possibility that I’d lose anything that I posted during the move, and I really didn’t want to face that headache.

Thankfully all I lost was a few of my comment responses from my last post, which I made while the move was actually happening. A move from one host to another can take anywhere from 24-72 hours for everything to make the transition. Even though my responses aren’t on the blog anymore they should have been received by the commenters. So that’s all good.

Also, since last November all new subscribers have been signing up through Mail Chimp. I wanted to see if I liked it before I decided to make a permanent move from feedburner, and I do.

So this past week I took the leap and moved all feedburner subscribers over to Mail Chimp. This should be the first post received by those of you who were getting them through feedburner. I think Mail Chimp has a much nicer look, and I’ll be working to make my emails even better in the future.

Now that the moving is done, now starts the reorganizing and redecorating.

For me this is where the fun starts.

It’s a good thing I love to organize stuff because I’ve really needed to do that here for some time.

I want TRV to be easy to navigate so searching for things is a breeze.

Wouldn’t it be nice if I could just repurpose some vintage bakeware, like I did in my craft studio, for organizing my topics and categories? 🙂

That’s probably not a good idea… some might get the idea that I’m a baking blog… which I’m sooo not. lol.

I’m working on a new header for the blog, and for social media sites too so that TRV has the same look everywhere.

I’ll also be redesigning my project galleries. The setup that I have now came over with me from blogger, where it looked and worked fine, but since coming to WordPress it has never really looked as nice as I’d like.

There are so many options for this. I’ve been looking at them, and I’ll have to decide which way to go.

There might also be a few other design changes down the road. Who knows? Sometimes I get on a roll and I just keep going.

The reorganizing and redecorating won’t happen over night, but that’s perfectly ok with me. I’m patient.

Over the next few weeks and months I’ll be working on it between projects, and hopefully when I’m done it will be all I ever dreamed it could be.

I’m taking an online blogging course that will hopefully help me make this happen, and I’ll be doing the majority of the work myself. I’m looking at this as a great learning experience.

It is possible to teach an old blogger new tricks. lol.

I really want TRV to be a place that inspires and encourages individual creativity. A place where it’s ok for me to be me and, more importantly, for you to be you.

Thank you so much for sticking with me while I try to make my blog the very best that I think it can be.

I’m in this thing for keeps, and I hope you are too. 🙂

As always,  thanks so much for reading, and until next time…

Hey there, I’m Tuula, creator of Color Me Thrifty.  I’m super excited you found me. I’m a repurposing, reusing, redecorating,  redoing,  rethinking kinda diy gal who loves to share colorful budget-friendly projects for the home and garden. When it comes to creativity don ‘t be shy. Be fearless! Read more here.