I hope your summer is going well so far. It’s been pretty hot here, and my hubby, John, and I have been working on quite the huge and challenging project…. our garden pond rescue.

Now right off the bat I have to say that we only have ourselves to blame for this project being such a huge one.

You know how sometimes life gets busy and some things just fall by the wayside? Well that was definitely what happened here.

We should have done this a few years ago, but it kept getting put off and put off… and because of that the project became larger and larger as the jungle grew bigger and bigger and deeper and deeper.

Here are some pics of the before so you can see what I mean. 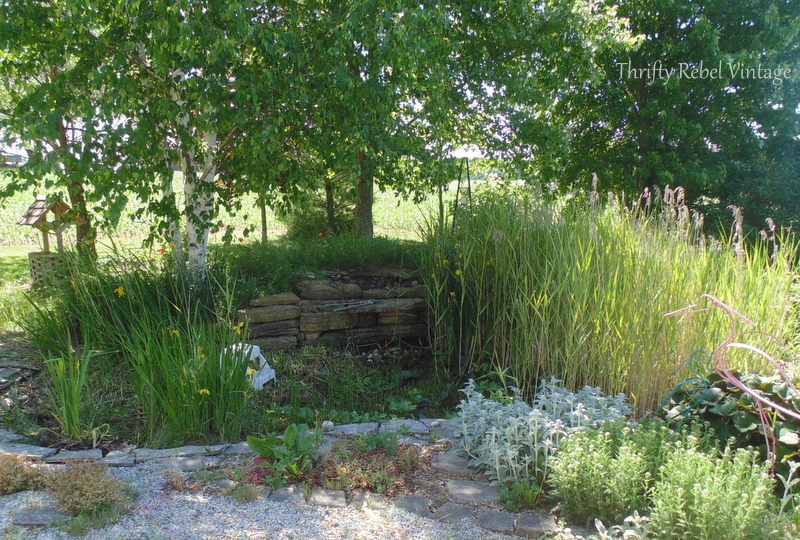 It doesn’t look so horrendous and overwhelming from a distance. 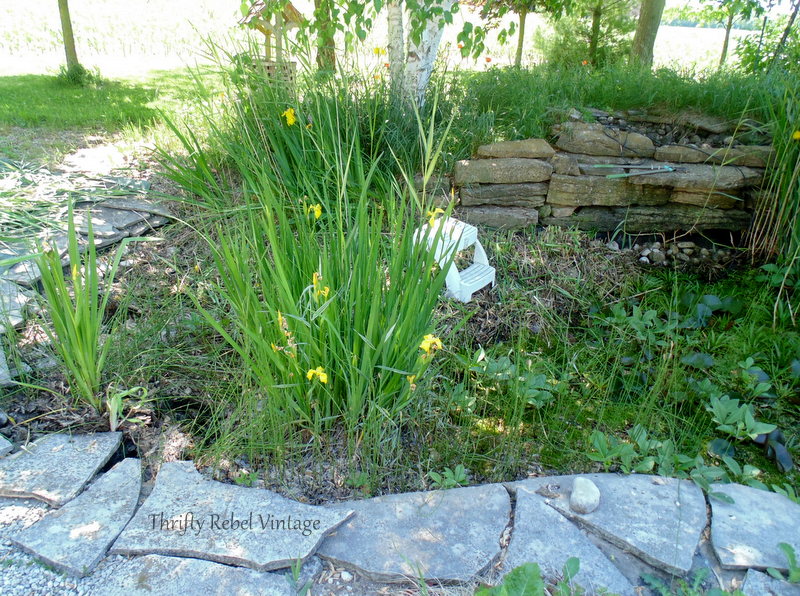 But when you get up close it looks like this.

I had already cut down the grasses on this end before taking these before shots so it was even worse.

You can walk on what looks like land, but that’s actually a huge mass of various plant roots that have become one large land mass. 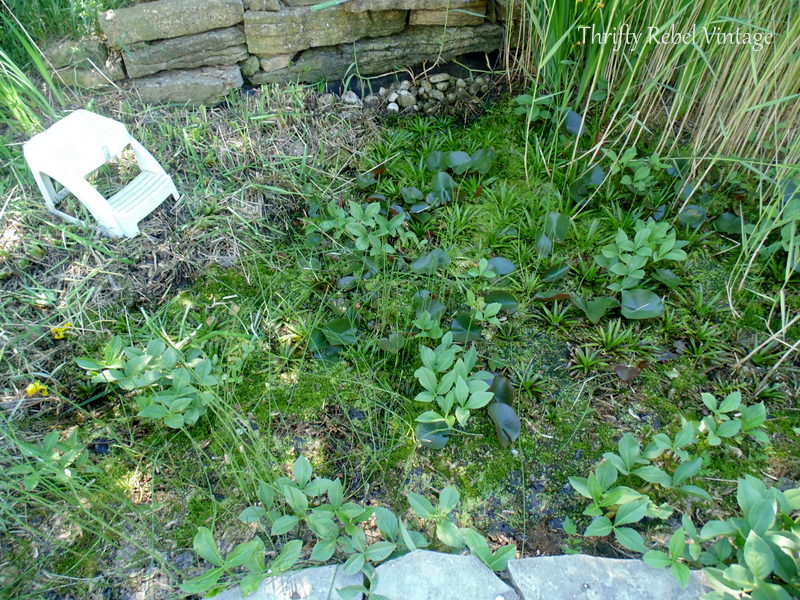 And this is the deepest area of the pond. It’s mostly filled with overgrown water lilies, water soldiers (the pointy thingies), one other long armed leafy plant that we can’t remember the name of, and some duckweed.

It’s hard to believe that there’s actually a little water in there somewhere.

There’s not much mind you, but it’s there. 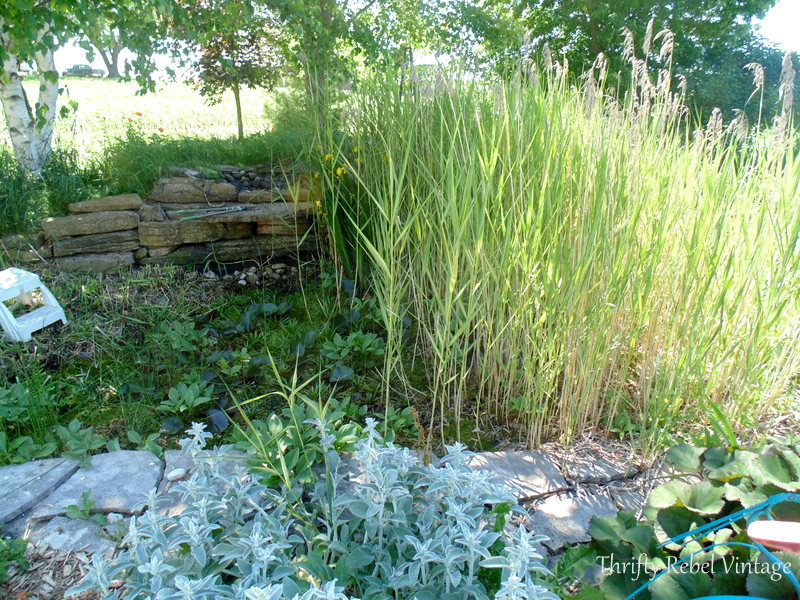 When our pond and waterfall were installed about 11 years ago the guys who did it put some grasses and plants right into the water among the rocks.

Little did we know what it would lead to.

When a pond gets overgrown like this the very worst part is beneath the surface.

I’m talking 10-18 inches of mixed roots from different plants tightly intertwined among rocks of all different sizes. I can’t even tell you how many rocks we pulled out of the root masses as we were making our way through this mess.

Basically the only thing to do to get the pond back was to gut everything and start from scratch. So that’s what we set out to do. 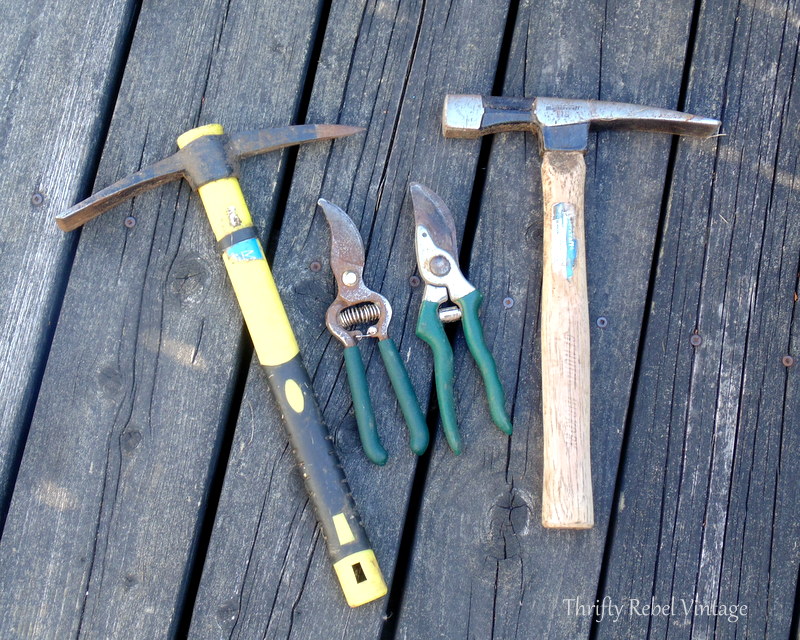 We used 2 small hand held prospecting picks to cut through the root masses from the top down, and hand held garden pruners for cutting the intertwined roots to the get rocks out.

These smaller picks let us safely make our way a bit at a time. This was a tedious and time consuming job, but preserving the pond liner was more important than hacking our way through with a large pick that could have caused some damage. 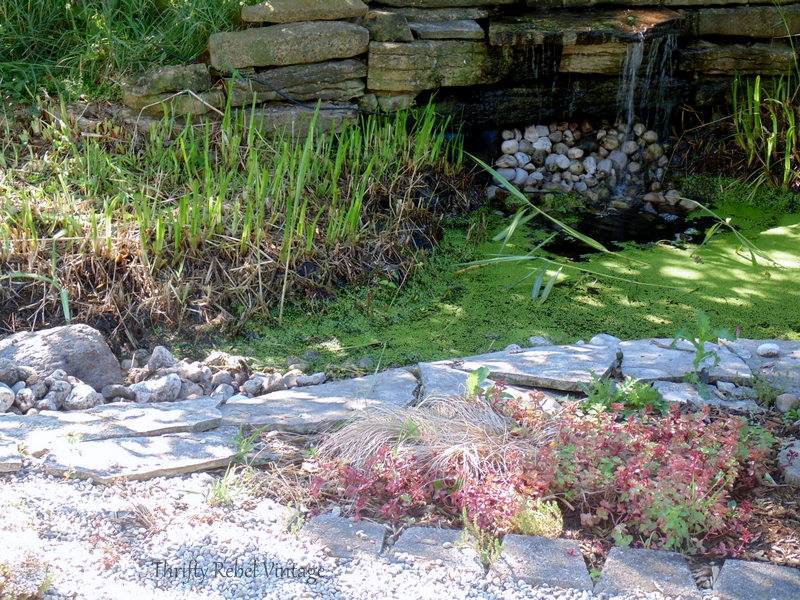 We started by pulling everything out of the center area, and I do mean everything.  All that remained was the duckweed, some of which will be scooped out later.

This clean out was not just about what was floating on the surface, but also reaching down into the muddy depths and pulling as many roots out of the rocks as we could. Needless to say we wore long plastic gloves. 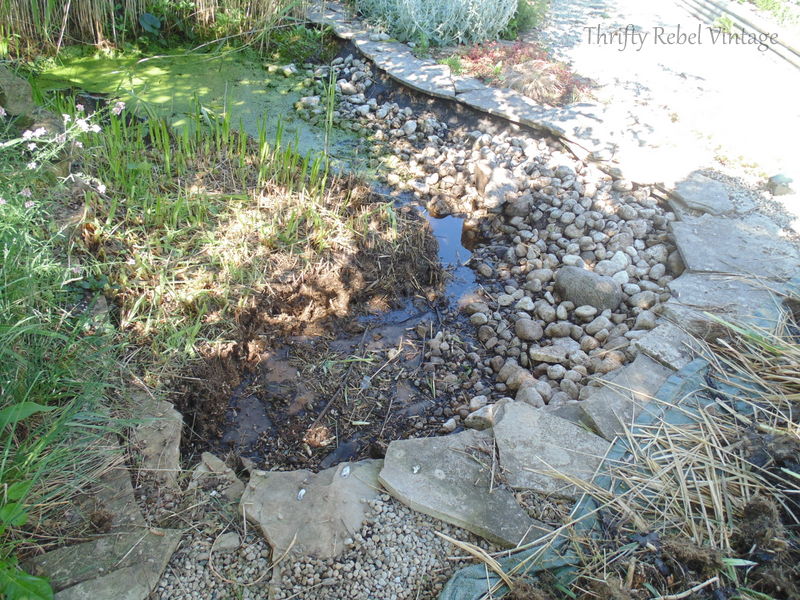 Then we picked, pruned, and pulled our way through the root mass on the one side. 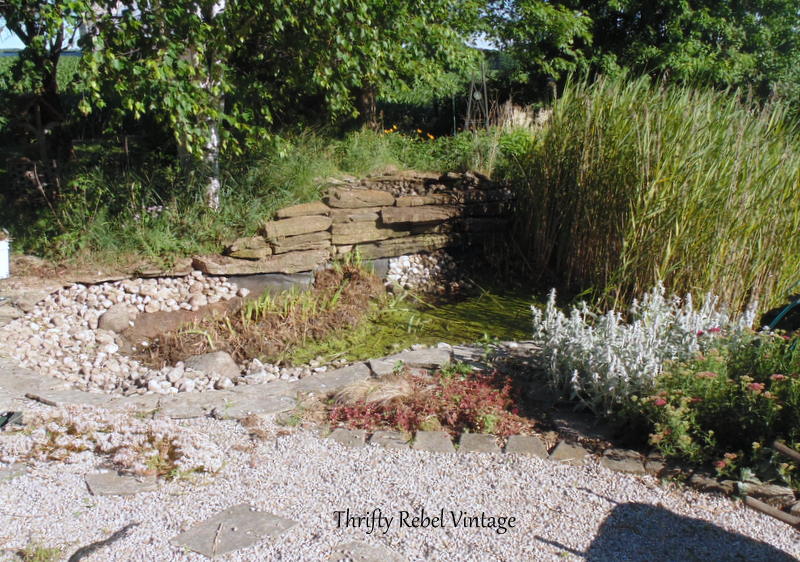 We used the stones that we pulled out of the roots to cover the pond liner to keep it from getting too much sun exposure. 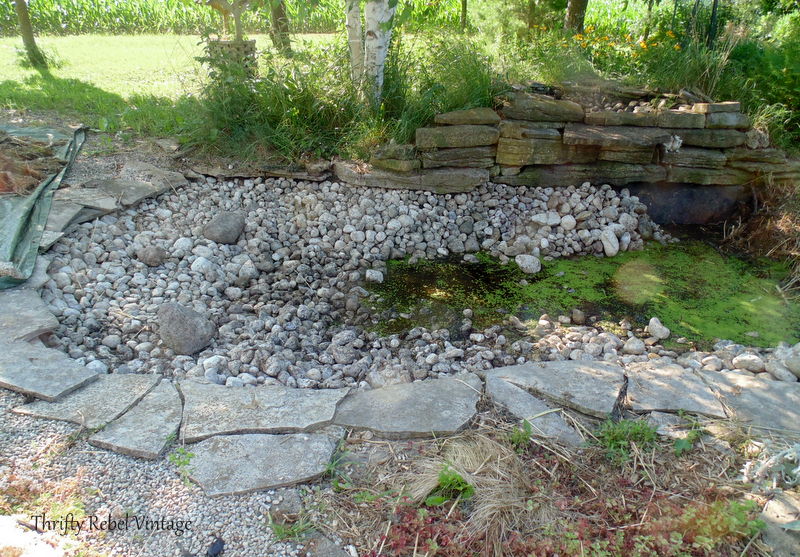 We cleaned up the finished end by completely covering the liner.

Can you believe we pulled all those rocks one at a time out of the root masses? 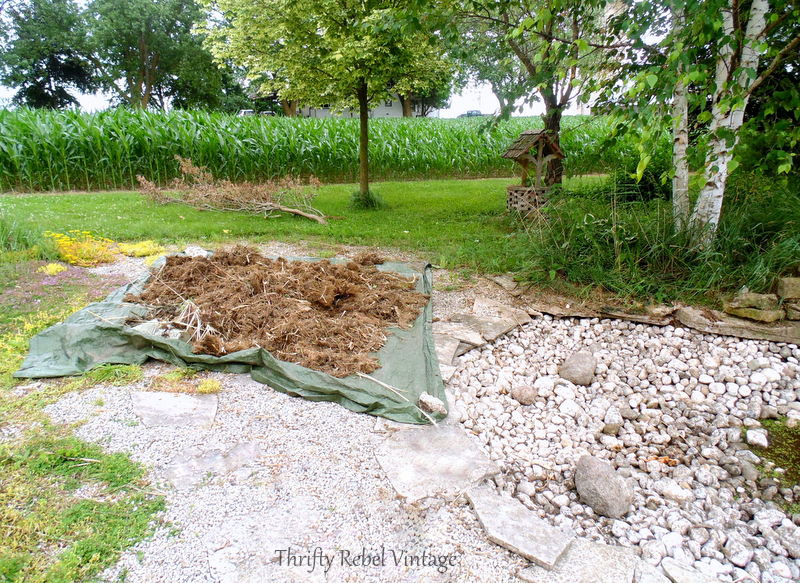 From the whole pond we took 4 large pick up truck loads to the burn pile at the dump. 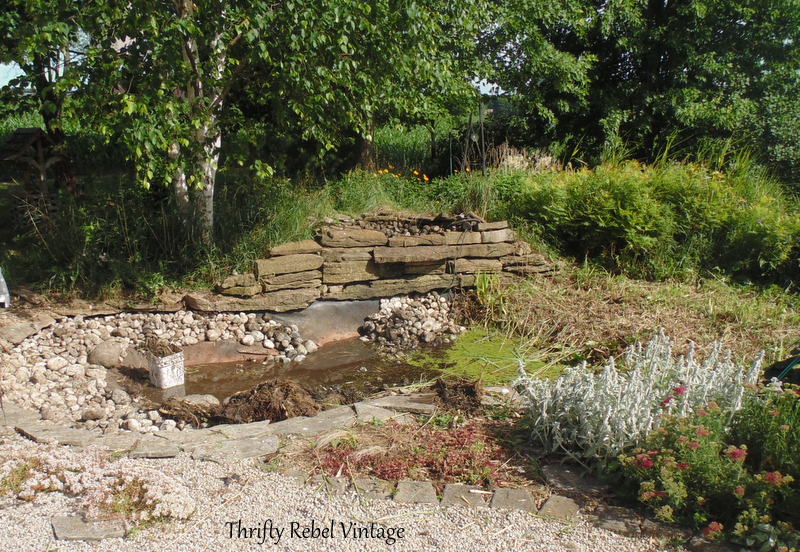 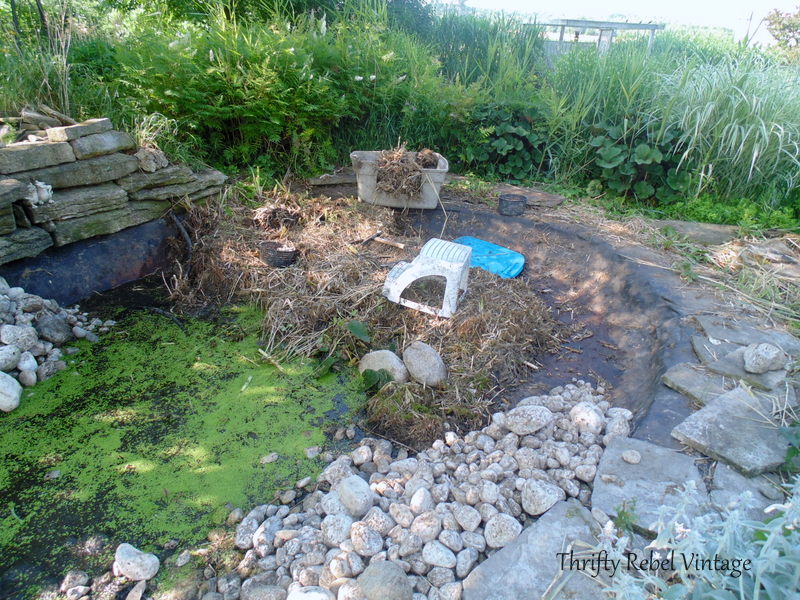 And we started picking away again… bit by bit. 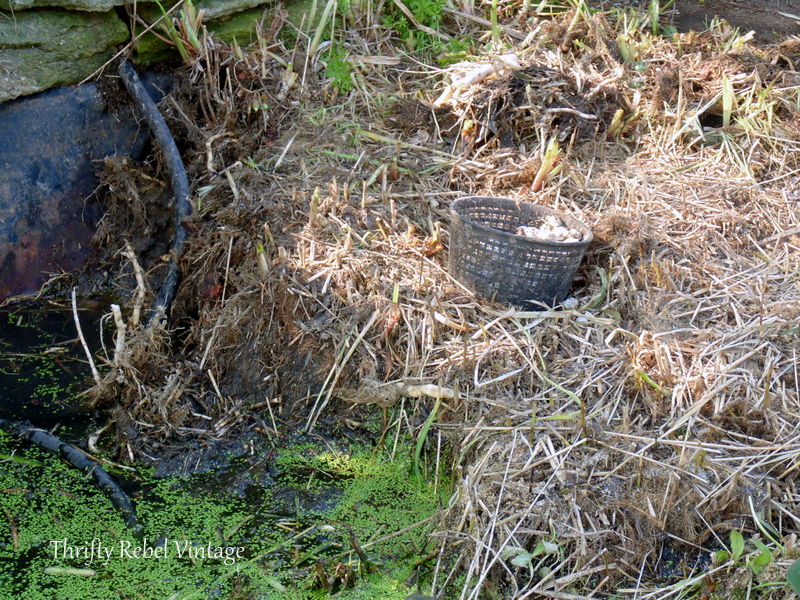 This close up gives you an idea of how deep the root mass was. 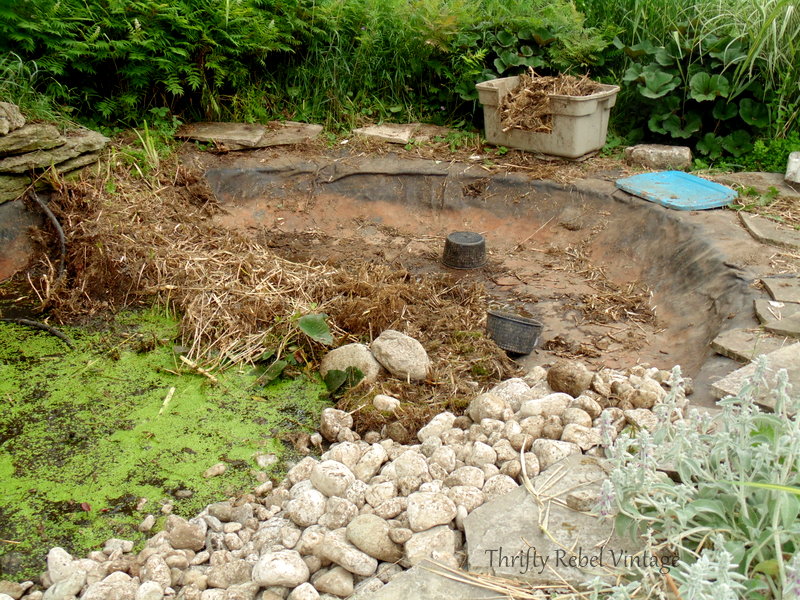 This is when a 4 day heat wave hit with temps of 40 degrees celcius or more with the humidity, that’s 104 degrees Fahrenheit and higher.

Needless to say it was suddenly much slower going, and on these days we only worked during the early morning and late evening. 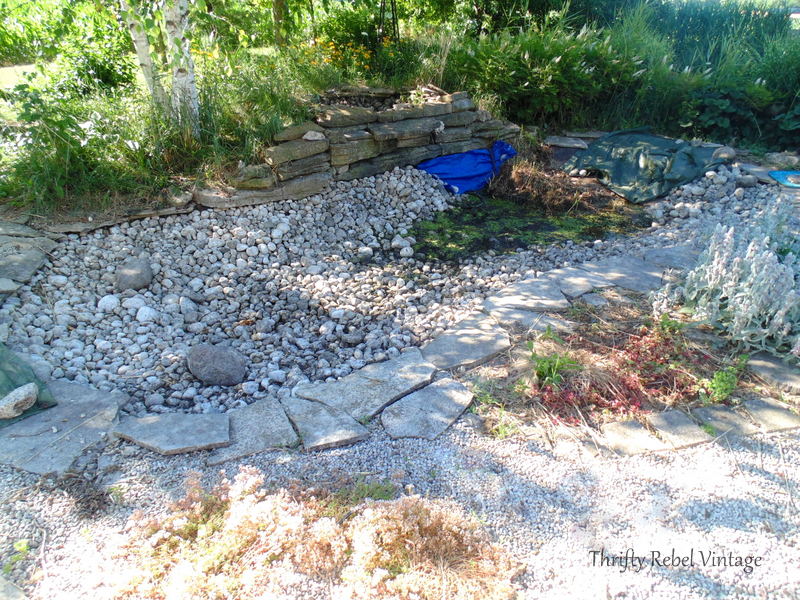 We kept the areas where the liner was exposed covered during the very hot daytime hours when we weren’t working on it. 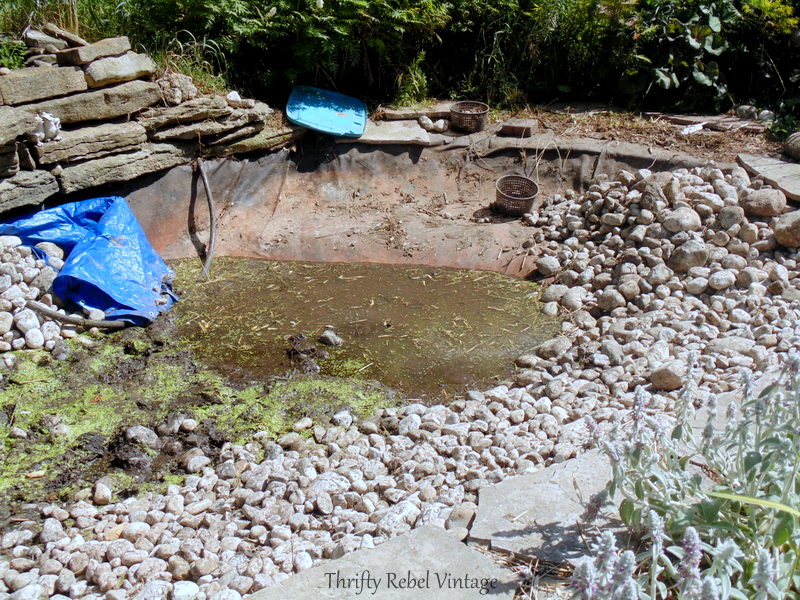 Then we finally finished. Yay! 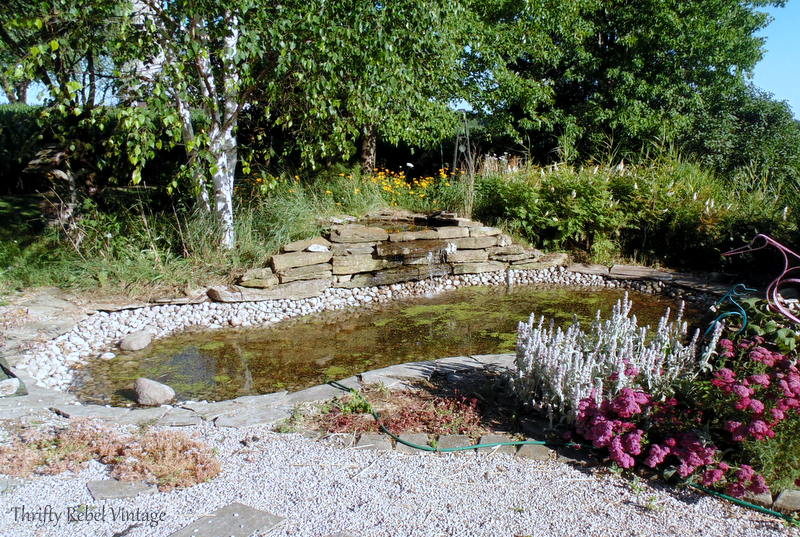 We replaced all the rocks on that end and slowly added water to the pond using our garden hose.

We’re on a well so we added water in intervals. We didn’t want to use such large amounts of water in too short a time span. Once we had it at this depth we let it sit for a few days so the pond could settle and to let bits and pieces come to the surface for scooping.

Here’s the main before again. Yikes!

When we started this project it felt very overwhelming, and looking at this picture now that we’re done I can totally see why.

The only way we could get through this project was by breaking it down and working on one part at a time.

There’s no way we could have afforded to hire someone to do it for us because of all the back-aching hours involved. I worked about 13 hours by myself on my Fridays off work, and the two of us worked on it for about 30 hours over a week. Landscaping labor is very expensive so we had to do it ourselves… or say goodbye to our pond for good.

We certainly weren’t prepared to do that and when we finally finished we were overjoyed and exhausted at the same time, and we both said never never never again.

From now on everything that goes in the pond will be in pots, except for floating plants that can be easily removed. 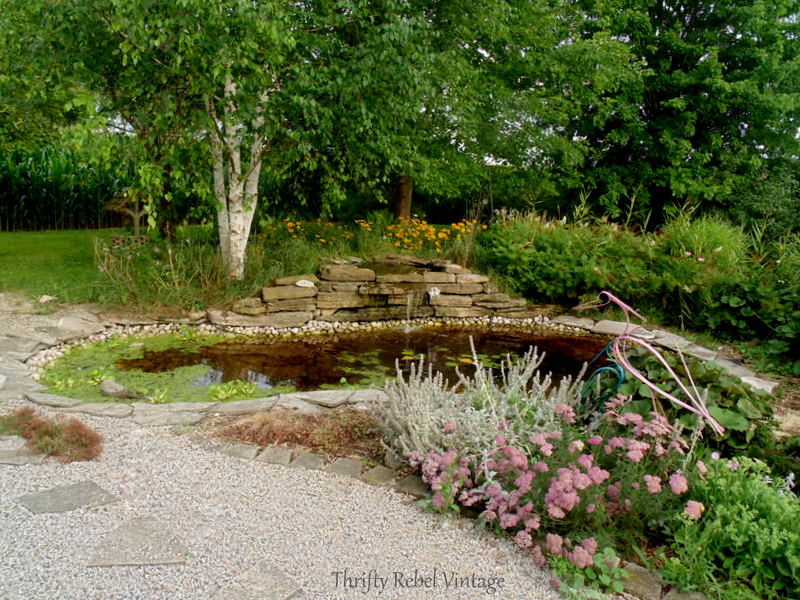 And here’s the after. So. Much. Better.

Thankfully we had some help filling the pond from Mother Nature.

So far we’ve added 12 water hyacinths and 3 water lilies. We need a few more plants, but we’re so happy to be starting fresh.

Here are a few more befores and afters. 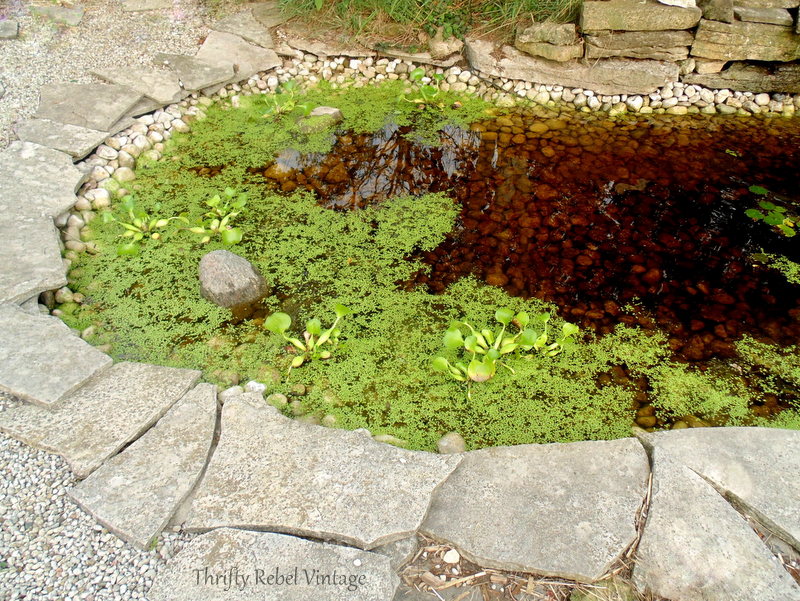 The wee green stuff is some kind of duckweed, and we’re sure it sneaked it’s way into our pond on some plants that we bought a few years ago. I don’t mind it because it’s very easy to scoop out and the waterfall pushes it to the ends of the pond so it’s not floating all over. To me that looks too messy. 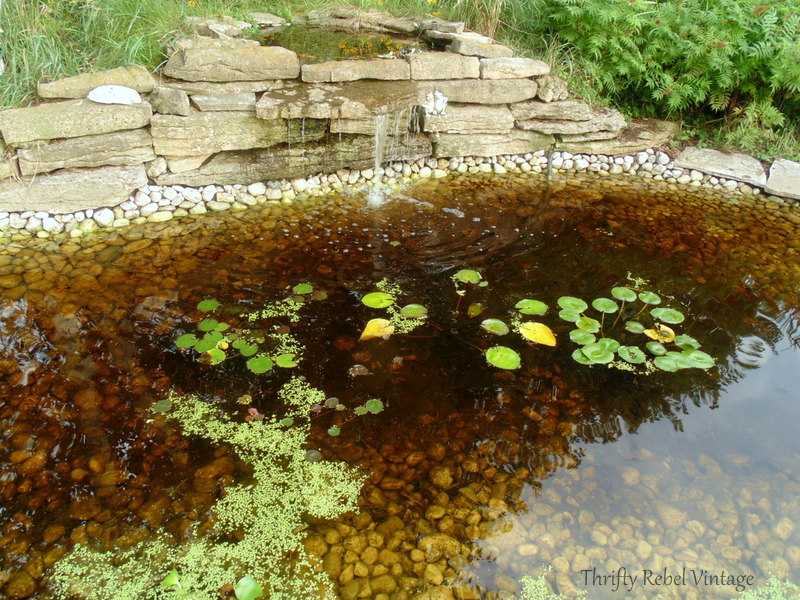 It’s so nice to see and hear the waterfall actually hitting water again. 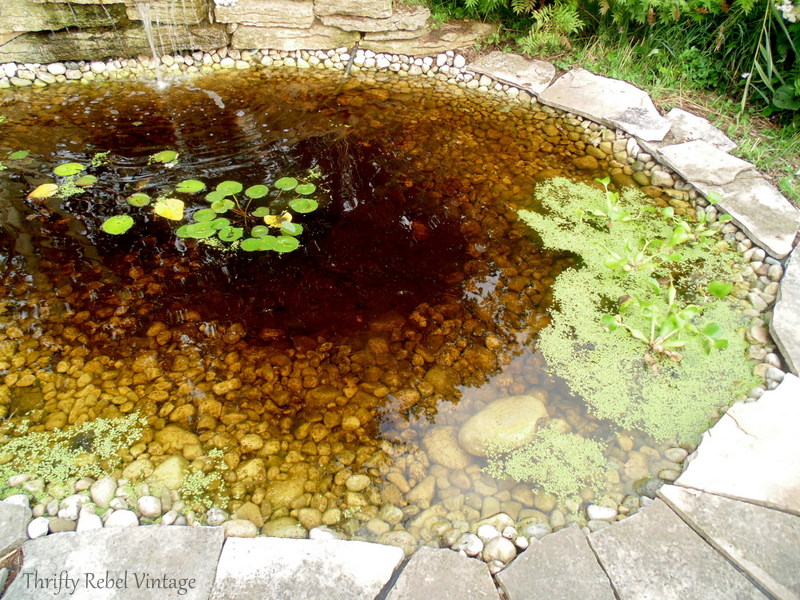 We really weren’t sure what state the pond liner would be in under all the stuff we removed, but we were so happy that we only found two holes on one side of the pond where grass roots had pushed their way through into the garden.  We decided to cut the roots at the holes and we left them there because the rubber liner was so tight against them.

We were hoping this would work and the pond wouldn’t leak, and so far so good. If we ever need to repair them we know they’re beneath the rocks just to the right of the hose. 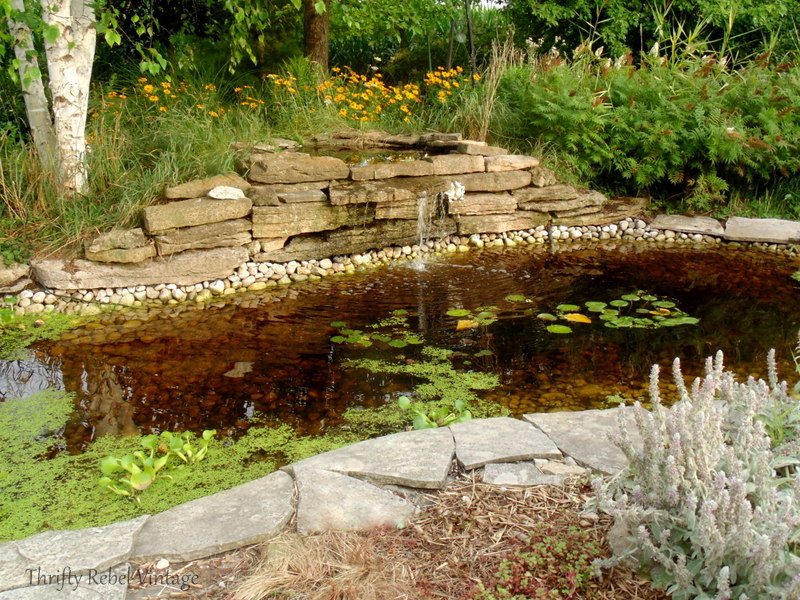 We still have some fine tuning to do like hiding the pump cord and the hose,  but we’re super excited to have our pond back and waterfall back. 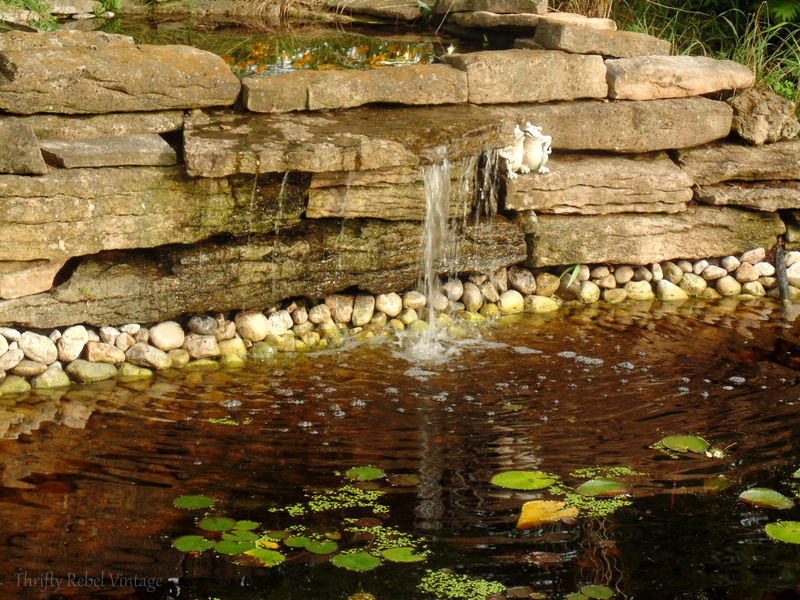 For us there’s nothing better after a busy day at work than to be sitting on the back deck enjoying the peaceful sound of the waterfall. When John and I call each other during the day we always say meet you by the pond.

Now when look at our pond, finally rescued from its jungled masses, we couldn’t be happier to have restored it back to the beauty that it once was. This was most definitely one of the hardest projects we’ve ever done, but we can now sit back and proudly say that we did it all ourselves… and we saved a huge chunk of change to boot. 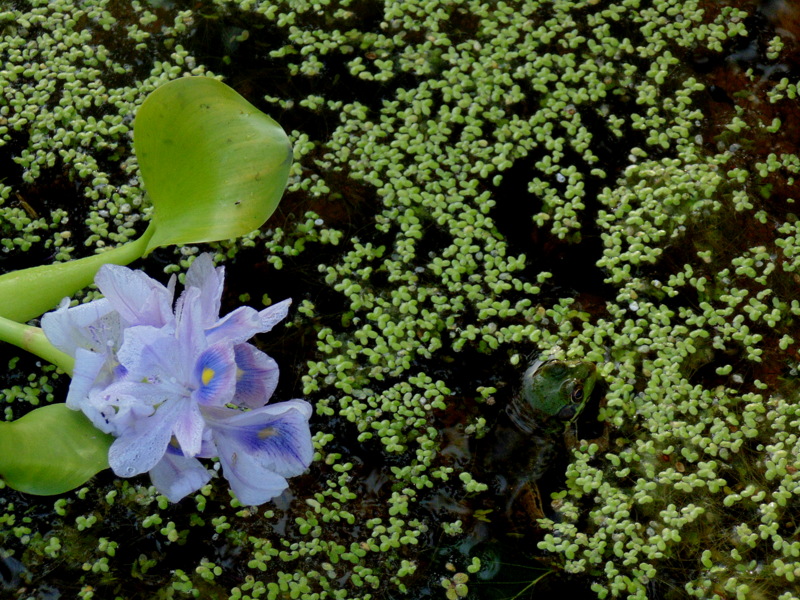 And we have some very happy froggies. 🙂

So the next time you have a huge project that you’ve been putting off because it seems overwhelming, break it down and do it one step at a time. The reward is so worth it.