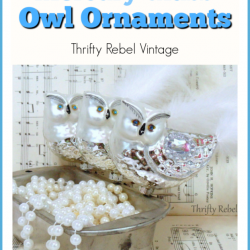 The other day I visited the thrift store in the town where I work and I got quite the surprise… a Christmas section already set up… and before Thanksgiving!

This is a little unusual to say the least. Honestly I haven’t even given Christmas a second thought yet, let alone a first thought. Thanksgiving is this weekend, and we don’t usually see Christmas stuff in the stores before that… and I don’t usually think about Christmas until after that.

Now I do have to say that it was just a small section, they’ll be expanding it later on, but still…  I was a little take aback at first.

But then I thought… why not?

I know some people like to get going with their Christmas projects and planning ahead of time so it’s probably helpful to find some things early. And I’m sure the thrift store has so much Christmas stuff that it’s a good idea for them to start early too.

So with those things in mind I decided to take a look… and I’m happy to say that sometimes the early girl catches the bird. lol. 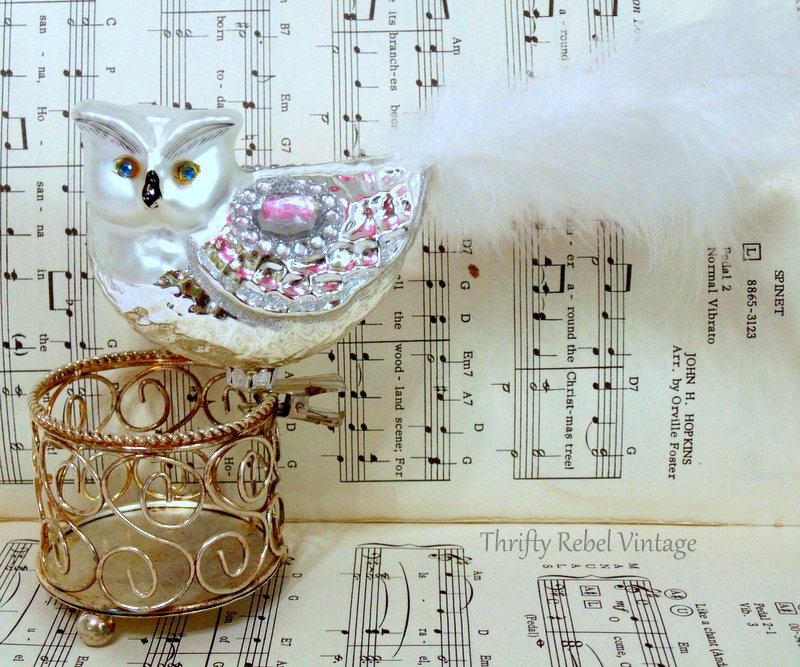 As I’ve mentioned many times before the fun part about thrifting is finding things you’ve never seen before.

He has a lovely white feather tail and beautiful details. 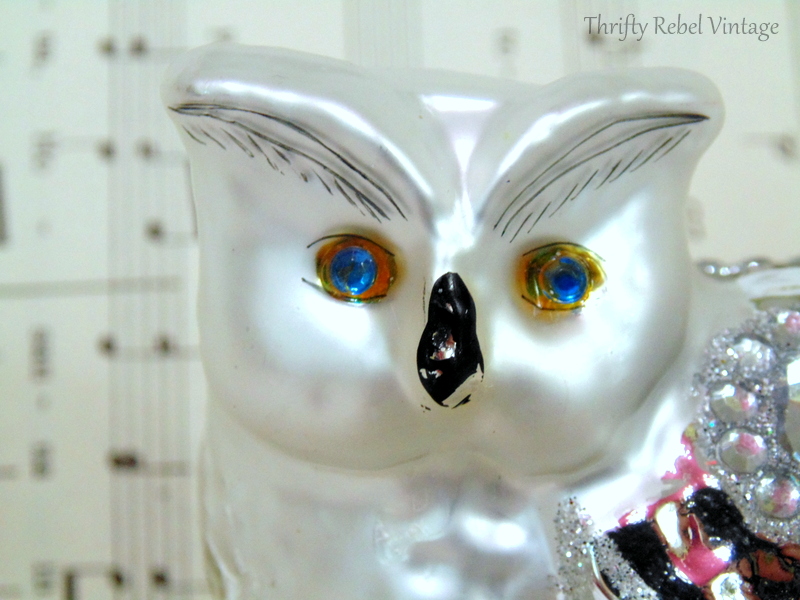 Don’t they seem to be looking right at you?

Just like the real owl that John and I saw in the forest at my mom’s cottage last fall. We went for a walk down the old lumber mill road and saw the owl sitting on a large limb of a dead tree. It was definitely looking right as us… and watched us very intently for a few minutes.

There’s something quite noble about the confidence of owls. They don’t seem to be afraid of anything. Once it decided we weren’t going to cause any trouble it flew to another part of the forest and we went on our way.

I have to say that my mercury glass owl looks pretty friendly.

I’m calling him a him is because he has blue eyes. A girl owl would definitely have pink rhinestone eyes. lol. 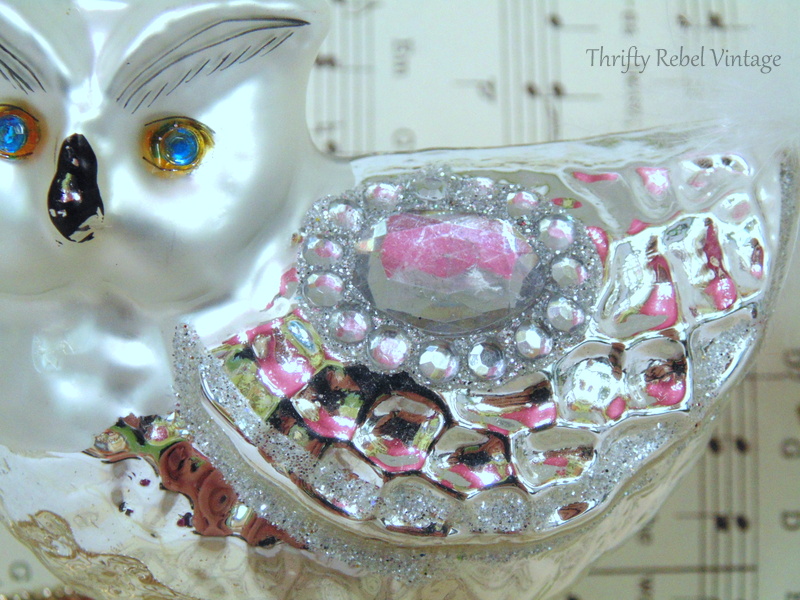 The wing has a lot of lovely details too, like the silver glitter.

When I first saw the wing I was sure there were clear rhinestones in those little circles, but there isn’t.

Somehow the glitter around the indented circles creates the illusion of rhinestones. It’s pretty ingenious! No rhinestones to fall out.

The pink refection you see in the mercury glass is my hot pink craft room ceiling. I didn’t even notice that while I was editing my photos, but I’m ok with it. It really shows how reflective the silver glass is. 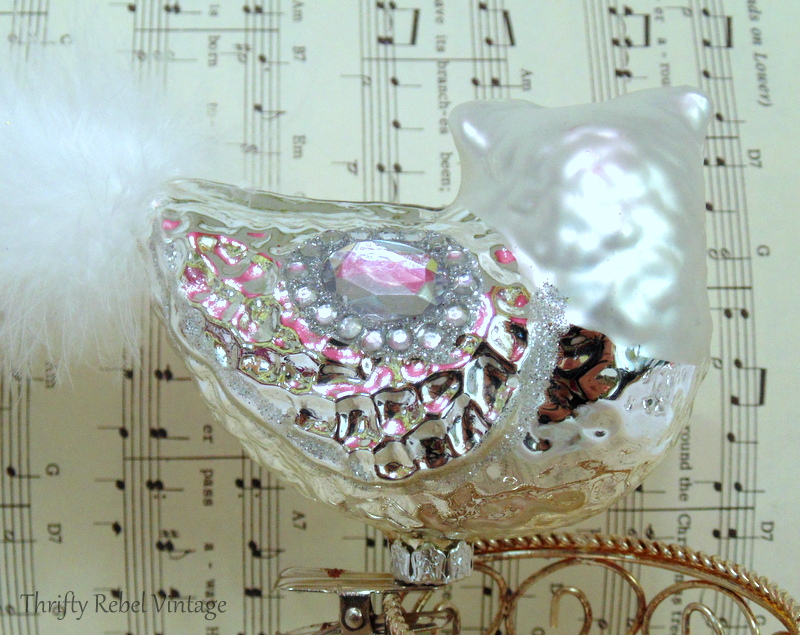 And the attention to the details continues on the back. 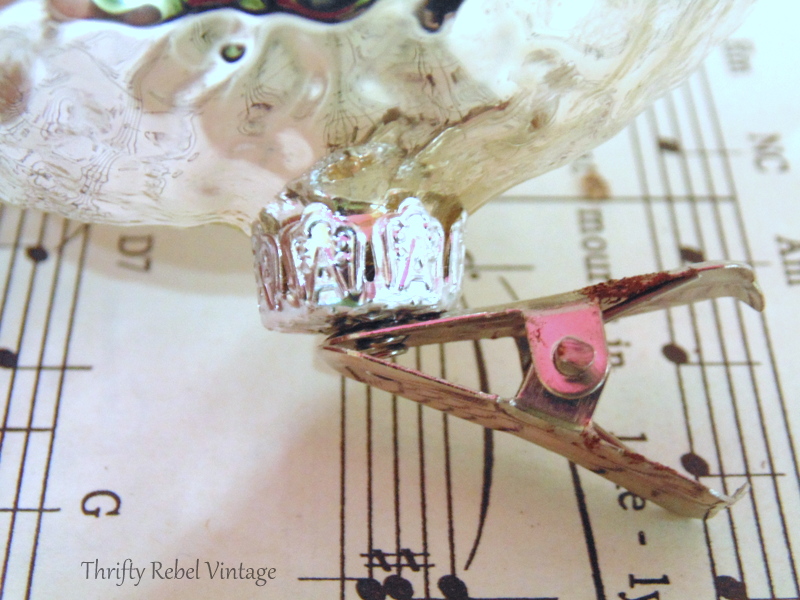 There are no markings on the cap or the clip, and after googling until I could google no more I came up empty.

UPDATE: I was hoping this owl was vintage, but a couple of my knowledgeable readers let me know that vintage clip-on ornaments have the clips on springs not on the caps, and when I did some research I did discover that. No wonder I wasn’t able to find this same owl anywhere. Thanks for the info Terri and Olivia. 🙂

Even though I now know he’s not really old I still think he’s pretty amazing, and I’m so glad to have found him. 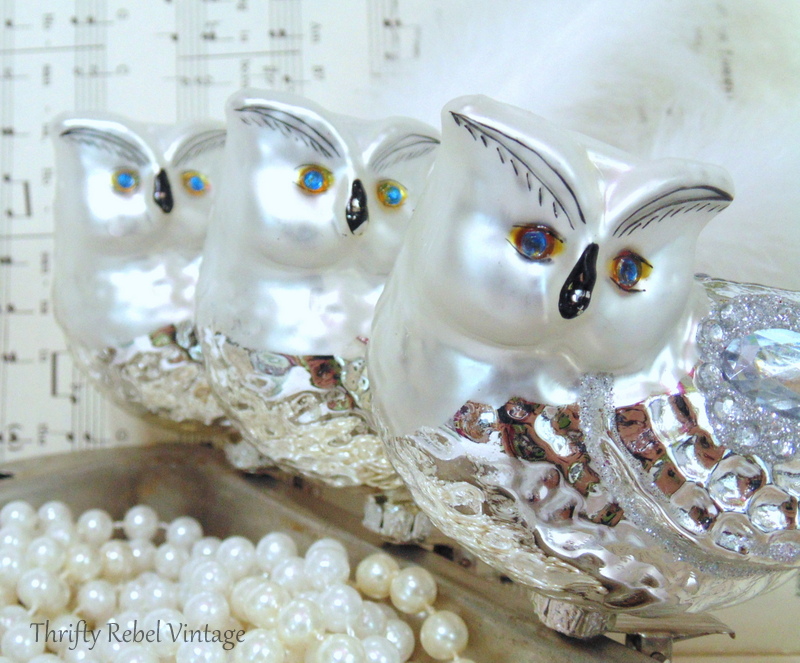 Finding a set of three!

And for just one little loonie! That’s a one dollar coin here in Canada. I kid you not!

You can tell these mercury glass owls were hand-painted because the painted details are slightly different on each one.

They are all in excellent condition, minus a little paint coming off their noses… which is to be expected I guess.

I’d say it was pretty darn loonie to have these priced so cheap.

But who am I to stand in the way of my own luck? 🙂 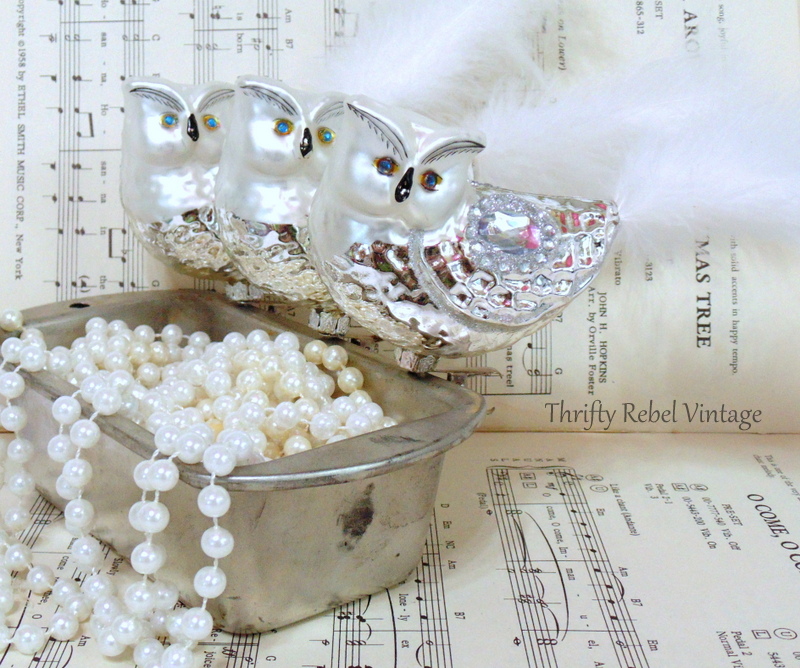 Those fluffly white feather tails are like delicious icing on a fabulous Christmas cake.

This early girl is thrilled to have found these 3 fabulous mercury glass owl ornaments.

They have found a good home, and I can’t wait to display them this coming Christmas.

But not on our Christmas trees. I don’t put glass ornaments on our trees because we have four feline friends who sometimes can’t resist sparkly dangling things. Who can blame them?

So I have a cool idea for how to display these elegant guys and keep them safe from furry paws, and I’ll be sharing that when I actually start thinking about Christmas.

So what do you think of my owl trio?

Thank you for pinning and sharing! 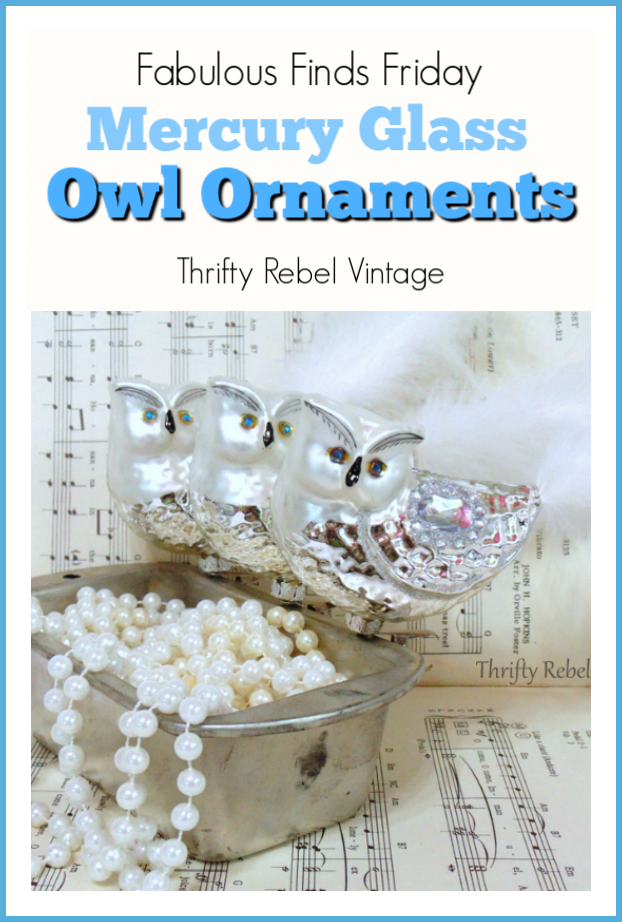