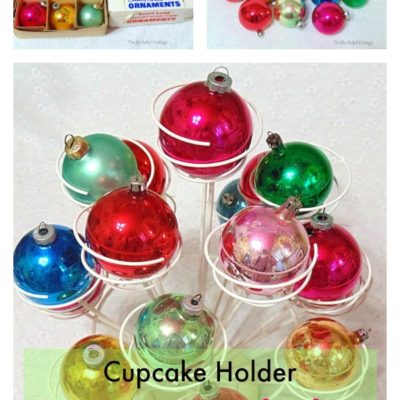 One of the things I enjoy most about the Christmas thrifting season is finding vintage ornaments.

They don’t have to be fancy, or rare, or even worth a ton of money.

They just have to be pretty.

It’s very unusual to find complete sets of vintage ornaments at the thrift stores around here, but that doesn’t mean there isn’t cool stuff to be found. 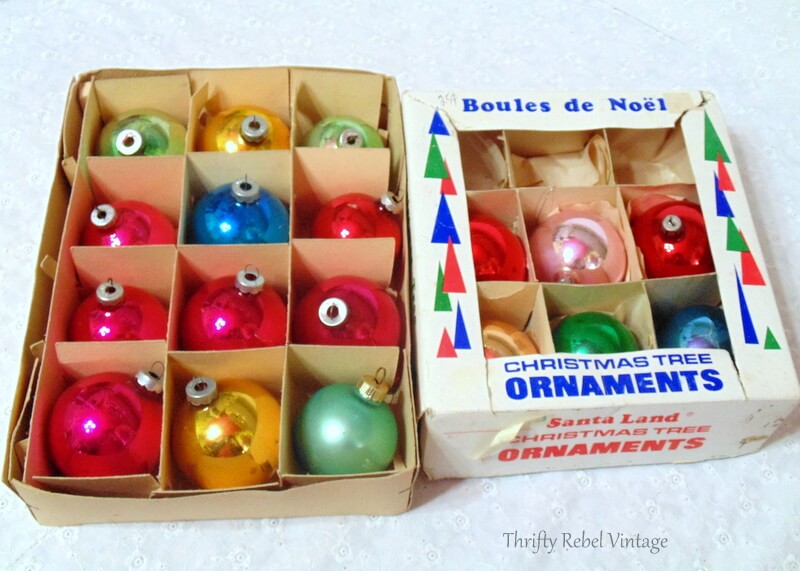 The one without the cover didn’t have a price on it so when I asked the lady said, “How’s 50 cents”.

The smaller one with only 6 ornaments was 25 cents. You can see the price written in pencil in the upper left corner.

So for 75 cents I have me the makings of a colorful Christmas display. 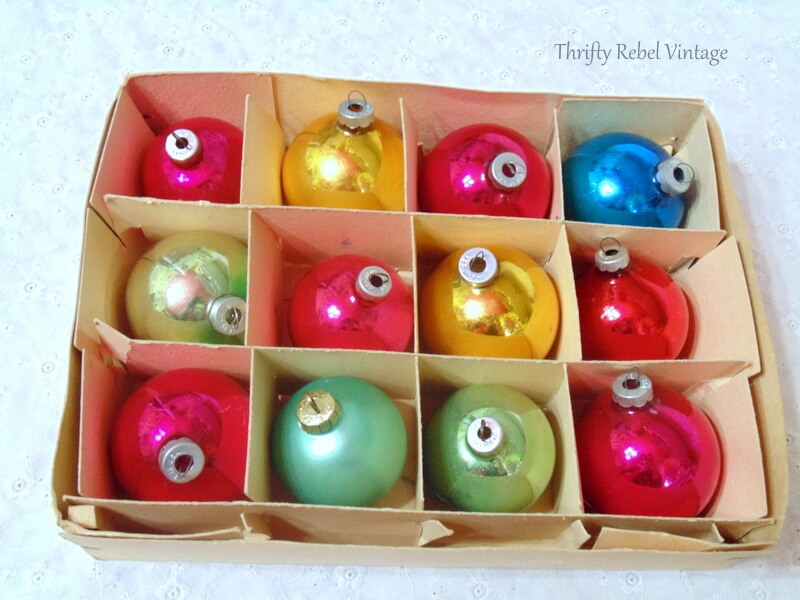 This box is a mixed lot with 6 larger ornaments with caps marked Made in U.S.A., and 5 smaller ones marked Germany.

The bluish/green ornament, second from the left in the front row,  has a golden cap and isn’t marked. 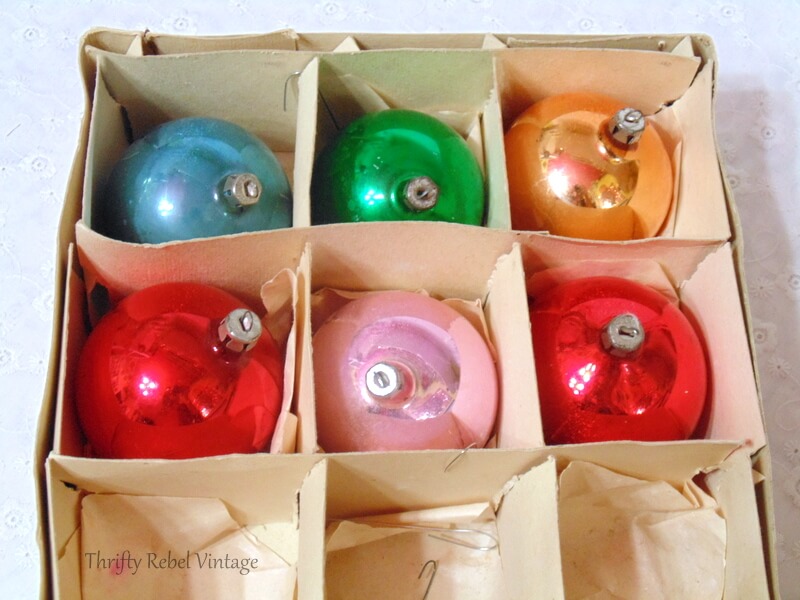 This is a matched set of 6, but the box is missing 3. That’s assuming that this was the original box, which you can’t always be certain of.

These ornaments have smaller caps and they’re all marked Poland. 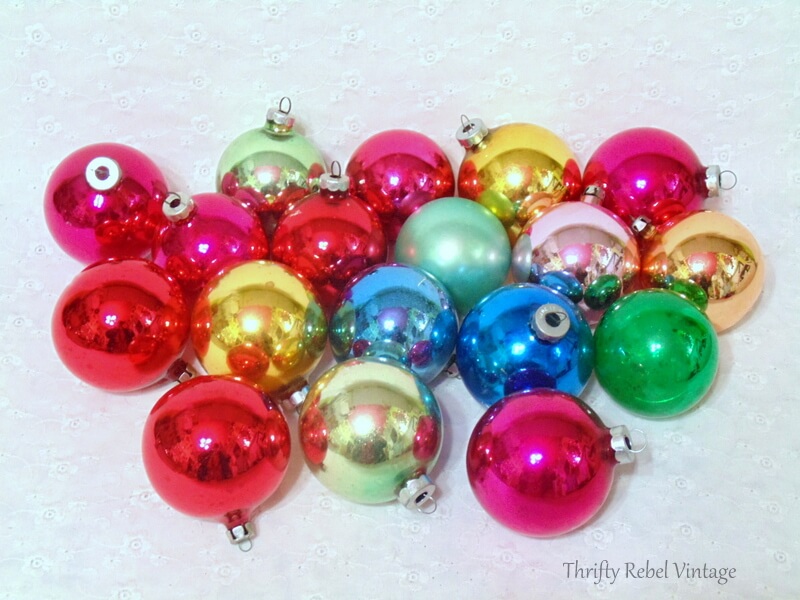 So what do you do with a 75 cent mixed lot of colorful very fragile vintage glass ornaments?

When you have playful cats like we do you look for a fun way of displaying vintage ornaments that doesn’t include a Christmas tree.

Even though we tie our trees we don’t put too many glass ornaments on them, especially vintage ones.

Accidents have been known to occur.

Not blaming anyone, (Salty), but just saying. lol. 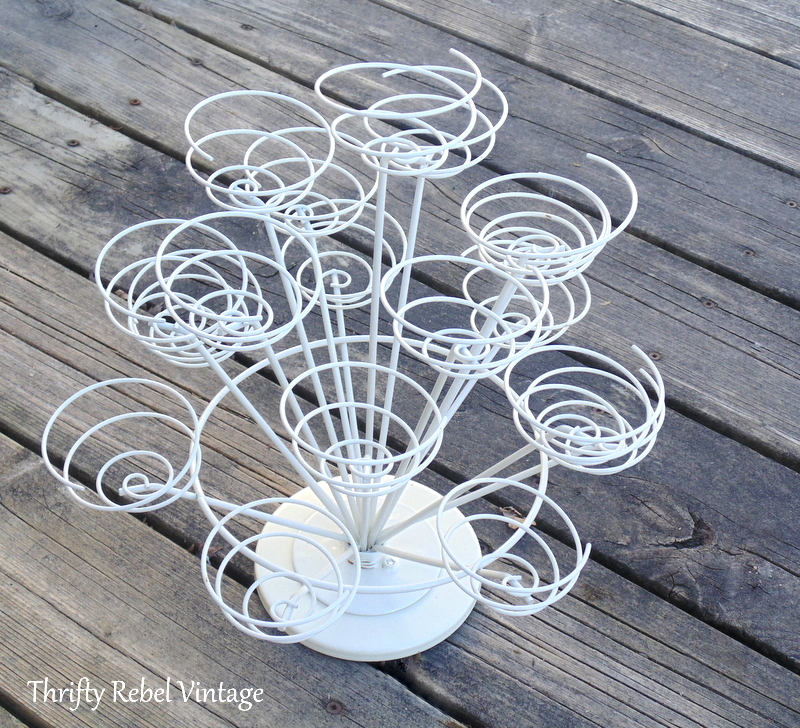 So through the snow I went to my greenhouse-turned-storage in the back of the yard in search of this. A cupcake holder that I found a couple of years ago.

I knew it was in there somewhere, just waiting for its some day project to finally come along.

And Eureka! I found it. 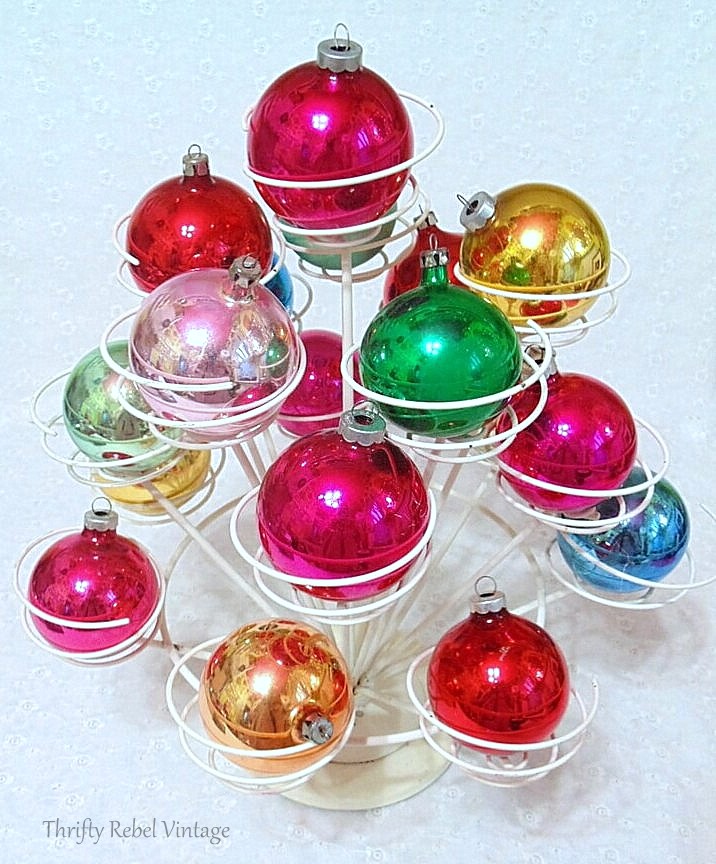 This was so easy it’s almost not a project, but after all the searching I did for the cupcake holder I’m definitely counting it as one. lol.

A fun thing about this cupcake holder is that it’s a lazy susan, so it can be turned to see all sides. 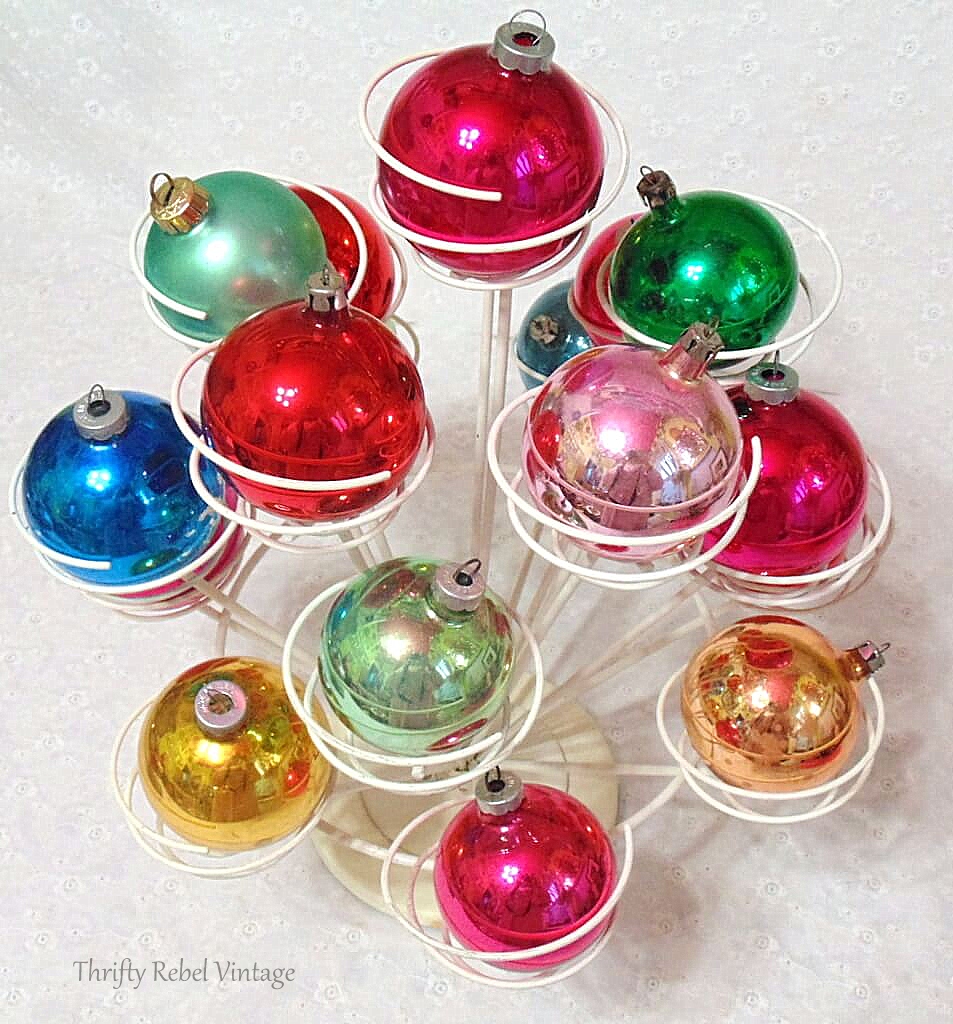 So simple for such a huge impact. 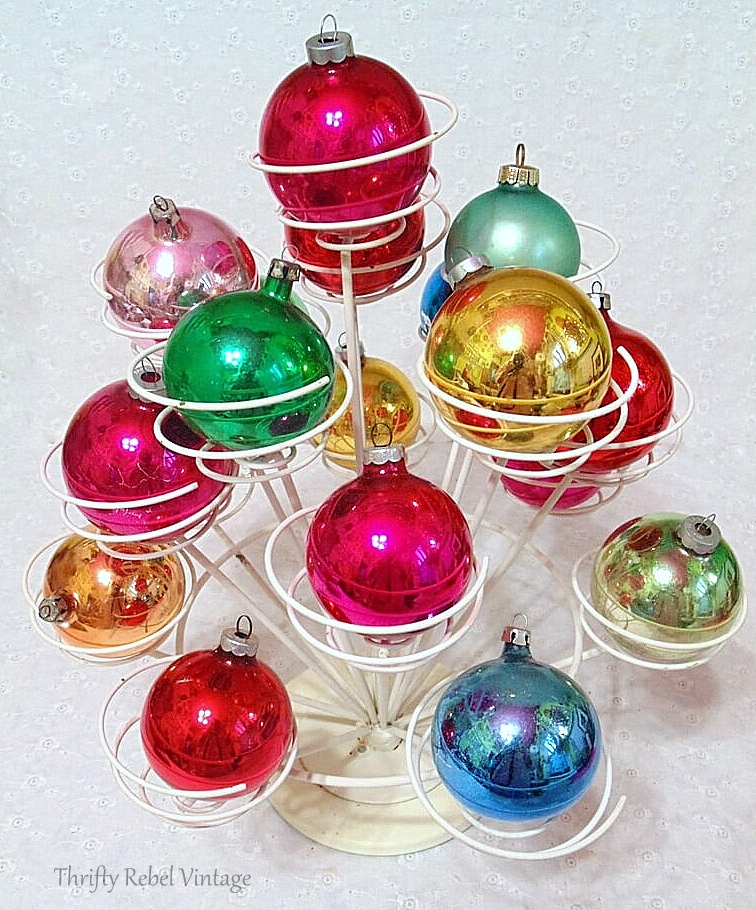 Look at those colors. 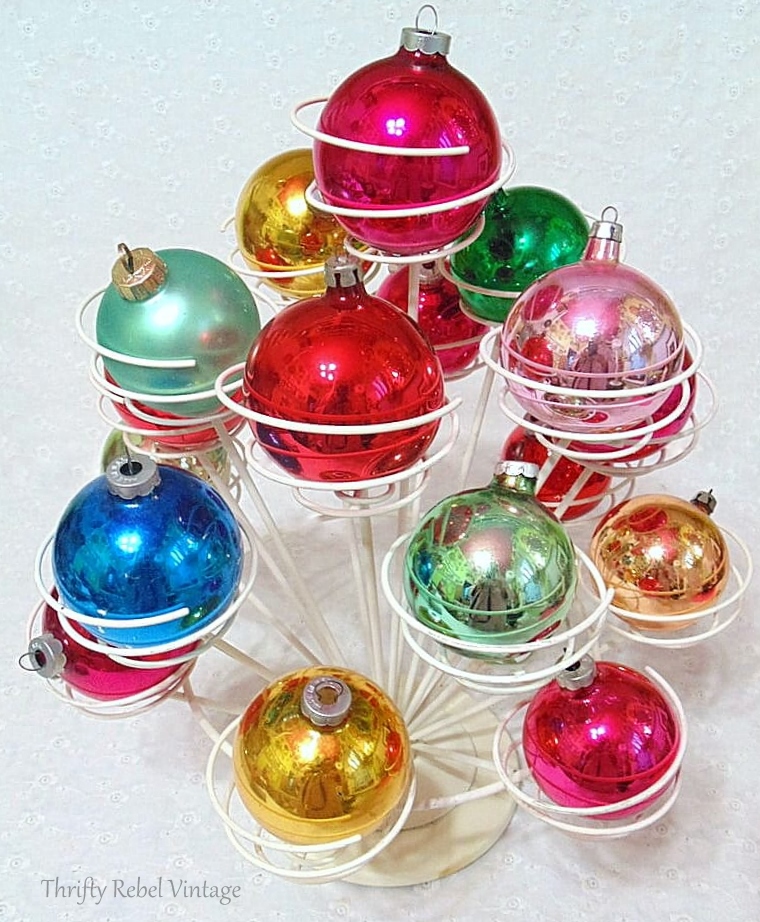 How serendipitous that this cupcake holder has 18 holders and I found 18 ornaments.

What are the odds of that?

Sounds like fate to me. I think they were made for each other.

Now I just have to find a place to put this where curious paws can’t reach. lol.

Save this idea for later by pinning to your favorite board. 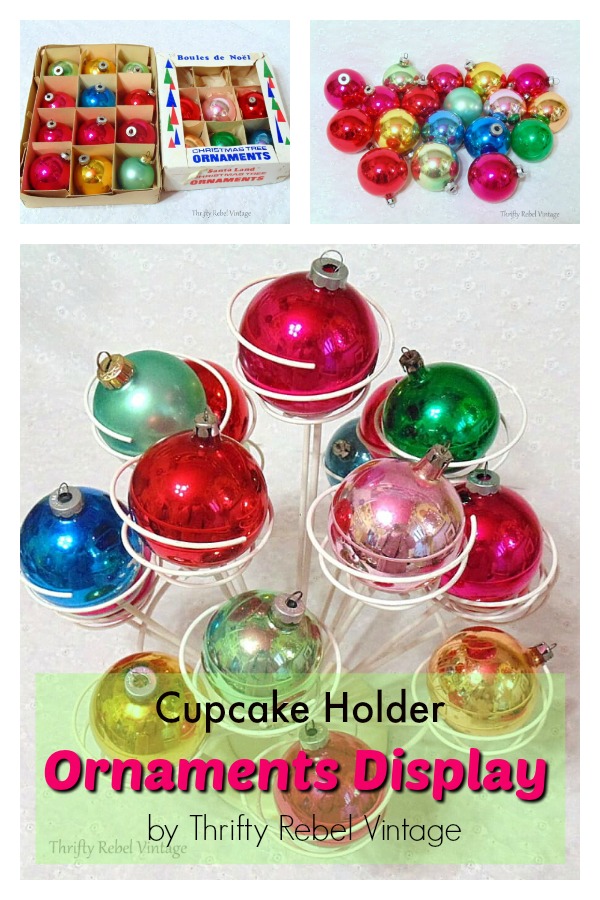