Say what? Cured of thrifting?

How on earth did I do that?

Easy peasy. I’ll let you in on a little secret.

Every now and then I go off the thrifting deep end, and something completely off the wall gets me so excited that I can barely contain myself. 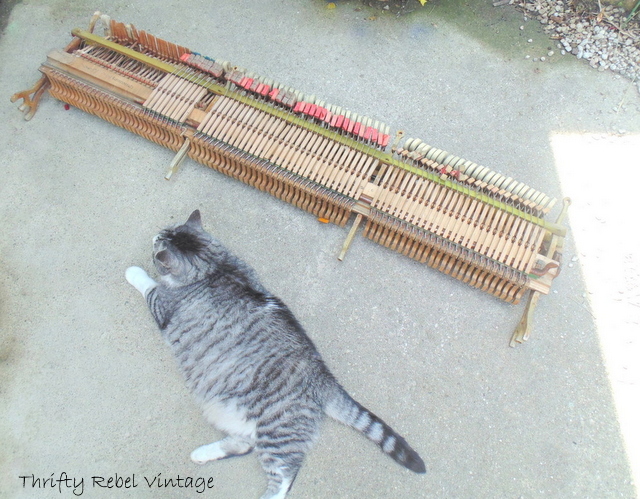 What was it this time? 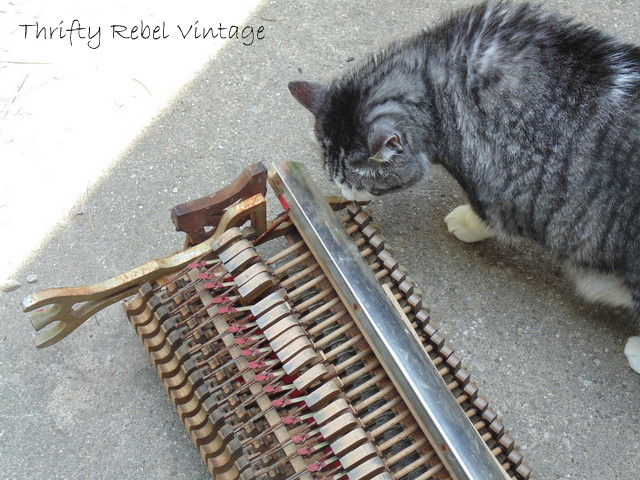 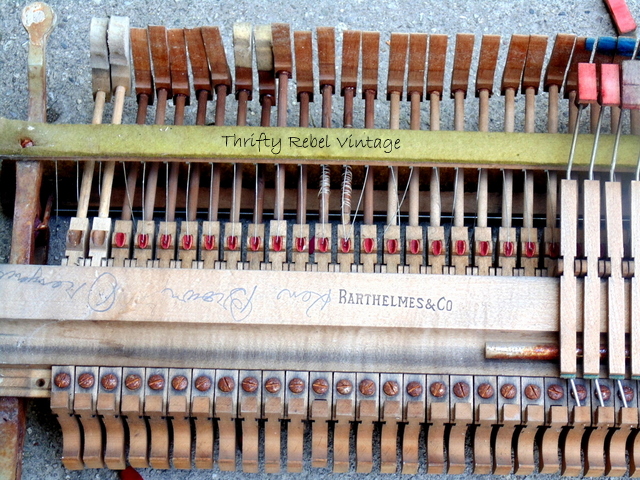 It was the guts of an upright piano.

Not a pretty word ‘guts’, but I can’t think of any other word to describe it… because it wasn’t very pretty at all. But there was something quite magical about it.

I can’t explain it… even to myself. I don’t even play the piano.

Does this sound at all familiar to you, or is it just me that this happens to?

Sometimes my heart brings home these treasures and my head just looks at them in disgust. lol. Sort of like when one of our cats proudly lays a dead mouse at our feet. We always pat them on the head and we say ‘good kitty’… but we don’t really mean it.

My head was not quite as polite to my heart. 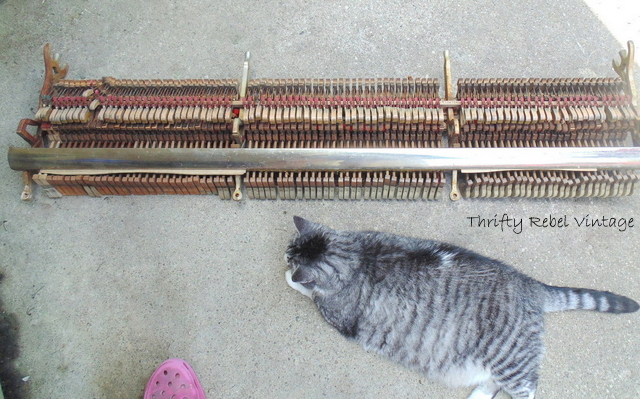 But I didn’t care. I just ignored my head… like I often do… because I was still in the throws of the excitement from the thrill of the thrifting moment.

You should have seen me when we drove by this thing. I almost jumped out before John could stop the truck.

Seriously… I couldn’t get out fast enough. 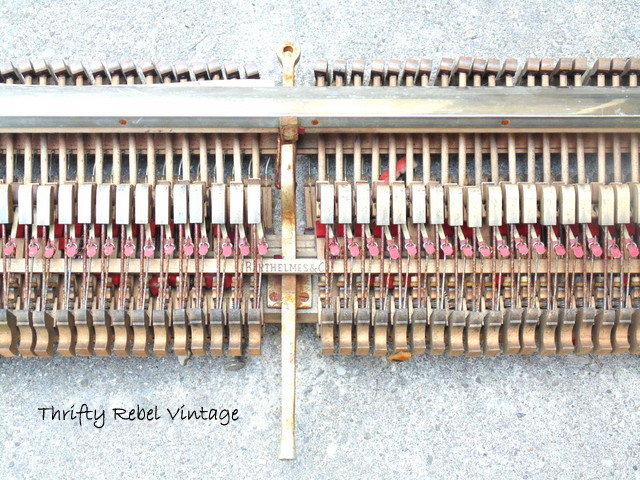 After 26 years of marriage John is still the best enabler ever, but I’m absolutely convinced that one of these days when I bring home one of my thrifting “treasures” he’s going to pat me on the head and say ‘good Tuula’. It’s going to happen.  I’m sure of it. 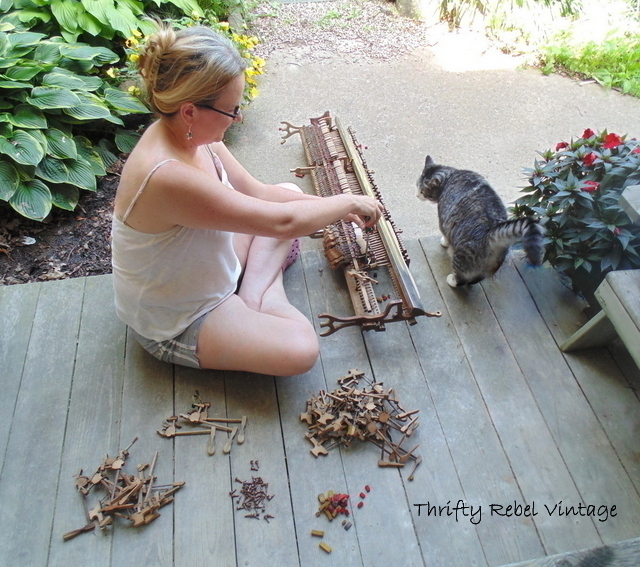 Once I collected myself Monkey and I spent a very hot afternoon on the kitchen porch out front… enjoying some shade while I removed all the bits and pieces… one at a time… with a hand held screwdriver.

Sometimes when I’m feeling all light and lazy I do things the old fashioned way. It slows time down, and is much more relaxing and peaceful than rushing through with a drill.

It was way too hot to do anything else anyway. 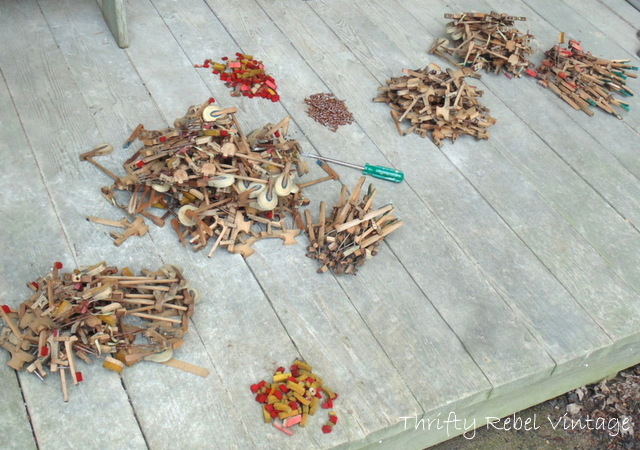 Here’s all my loot.

So what did I do with it?

Absolutely nothing……. .nada…….. zilch…….. zero. The wooden pieces were in terrible shape, and the piano hammers were all dried out.

I was hoping to repurpose these pieces somehow, but I found out very quickly that my brain had no room to deal with this loot. The truth is I probably already have enough stuff for projects for the next 5 years. lol.

That, my friends, is what cured me… and I hadn’t done any thrifting since then. 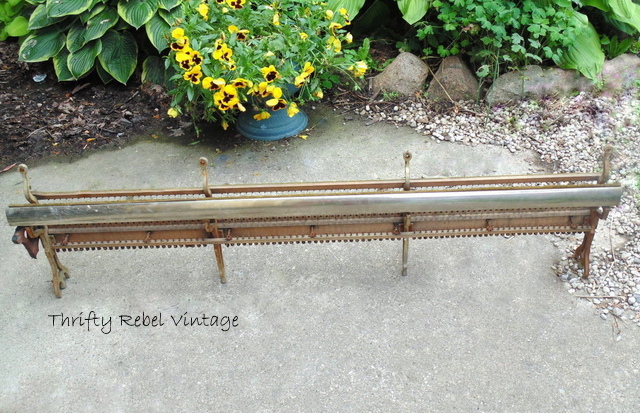 Until three weeks later… my head was slightly less occupied and while I was looking at these pictures I could literally feel the creative brain cells coming back to life.

I knew exactly what they were thinking. 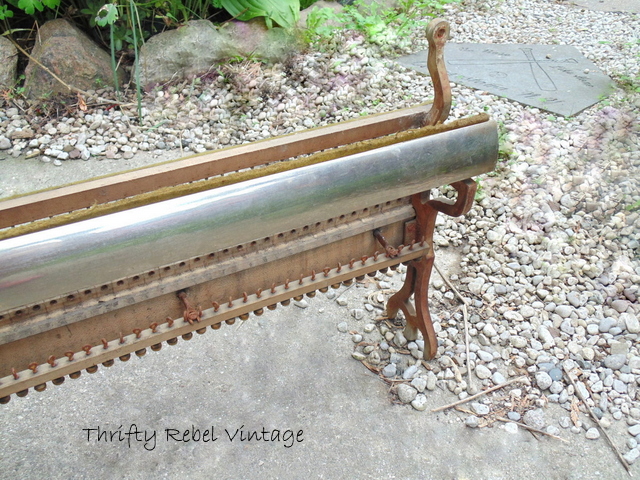 “Hmmm… those feet are pretty sweet”. 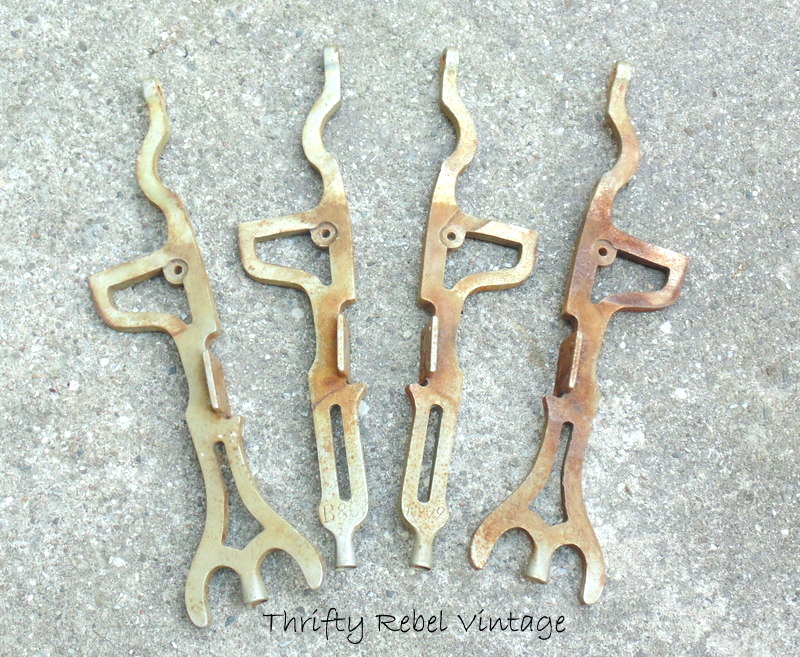 I see angel wings. Be still my junkin’ heart! Do you see them too?

And then I felt it. That little flutter of excitement that tells me that I did OK, and I could feel my head coming back on board. I was going to salvage something from this “incident” after all.

My brain’s cogs are churning, and after my head made its apologies to my heart all was right in my world once again. And just like that I was cured of my thrifting cure. I was starting to worry it was going to last forever.

My thrifting break was good though. I used the time going through my stashes purging (donating) and reorganizing my craft room and greenhouse/storage area. It felt good to freshen things up a bit.

I did some thrifting this past weekend, and I’ll show you what I found later in the week… as soon as I can get that post together.

Now I have to spend some time in my junk stash. Yay! That’s one of my favourite things to do. It keeps both my heart and my head happy… at the same time! I love it when that happens! 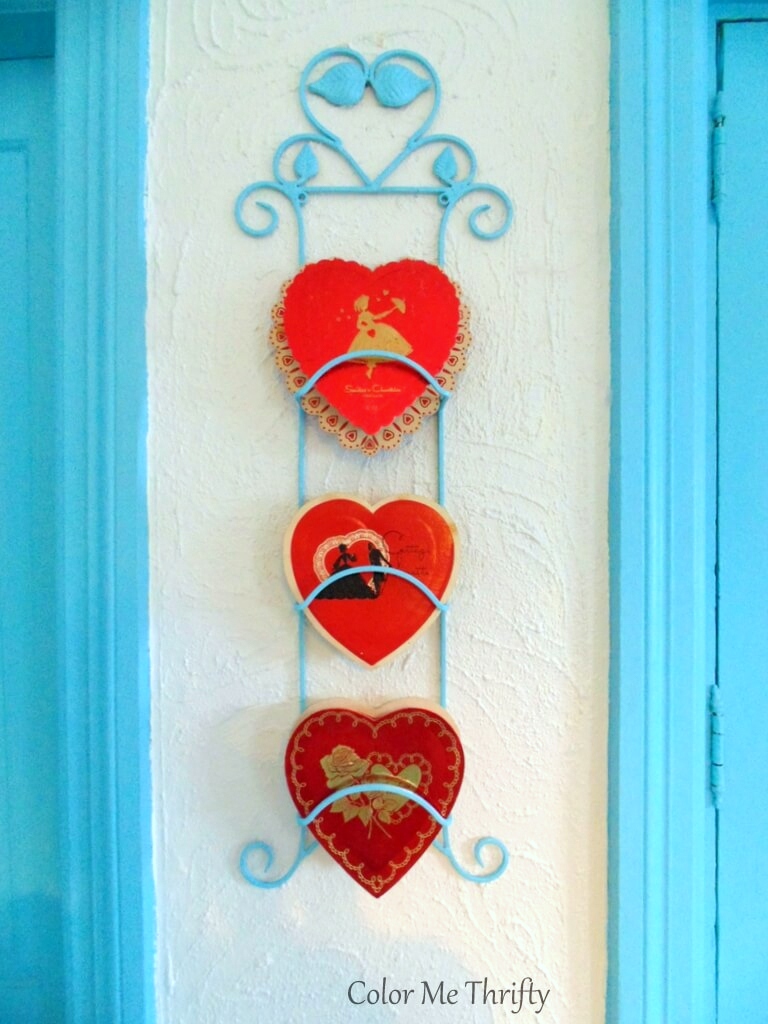 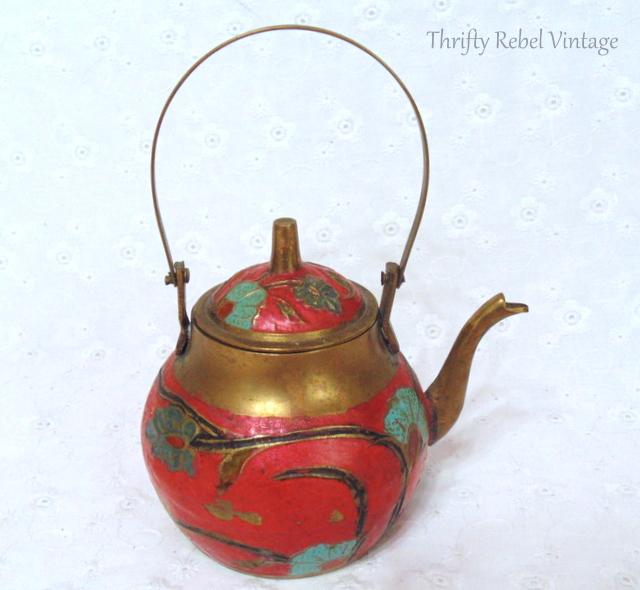 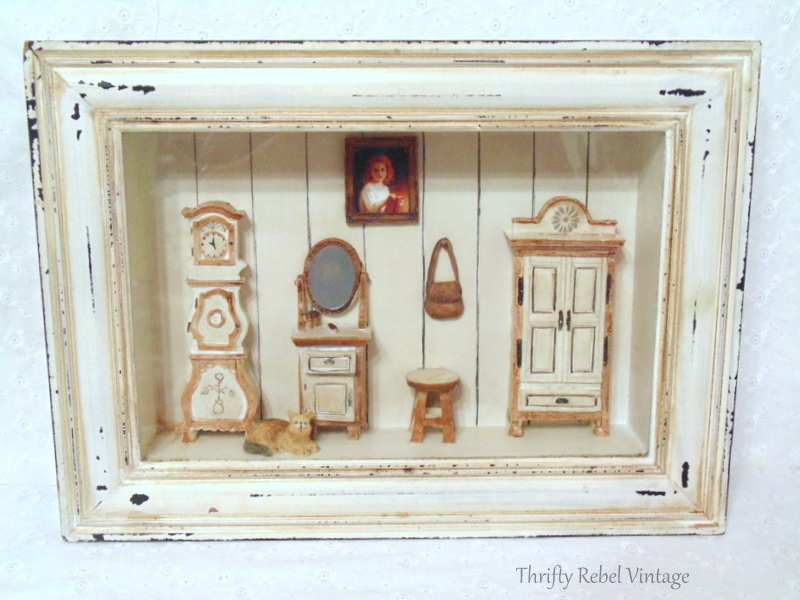 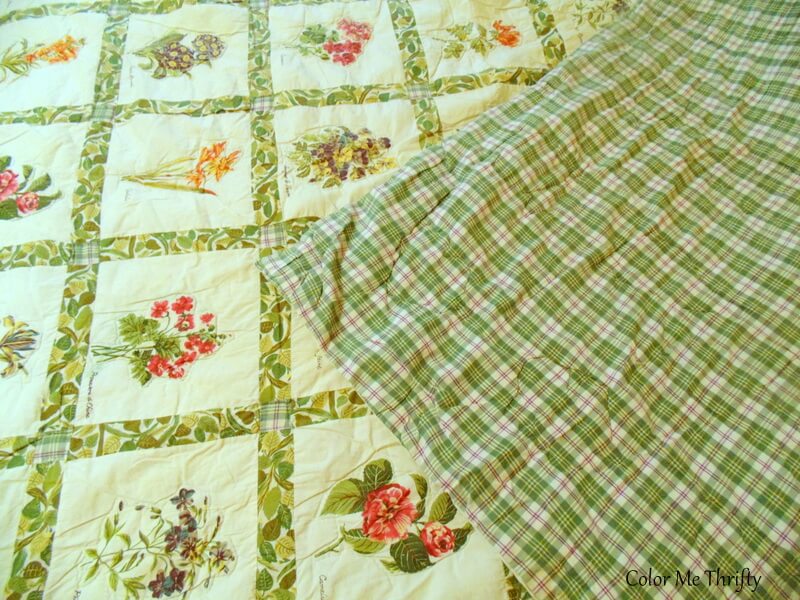 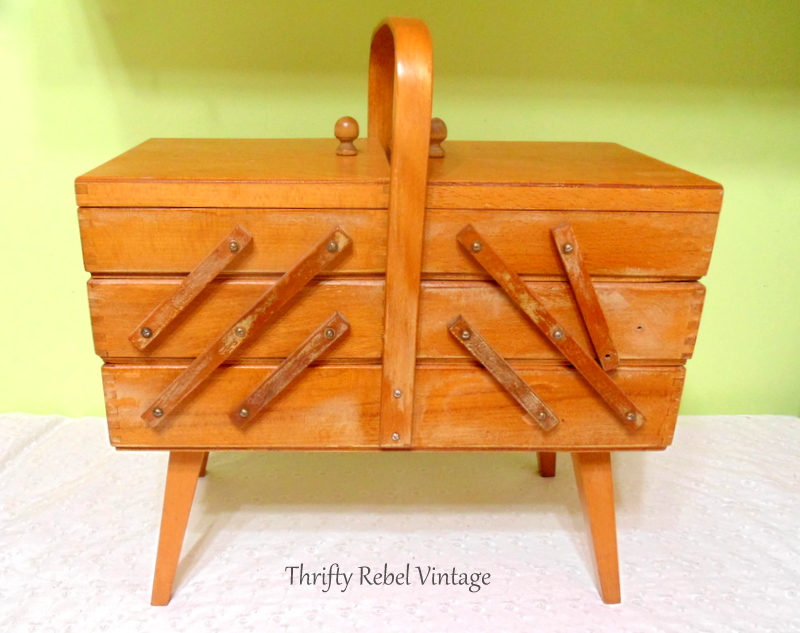 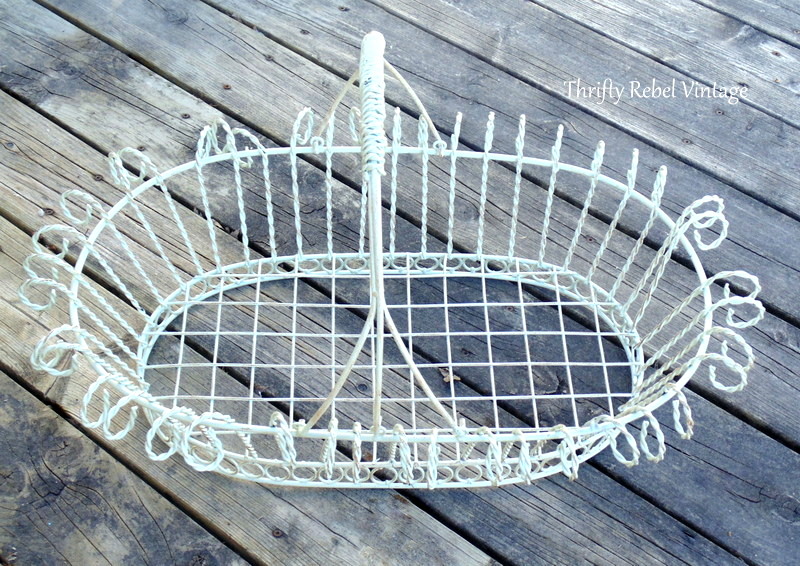