The thinking, the planning, the anticipation of the surprises that lay ahead.

Because even though I always have a plan, I never know what might happen along the way. And I’m always open to new ideas that will make the journey more fun.

I’ve been thinking about the living room makeover for some time now, but just wasn’t feeling inspired to get into it. 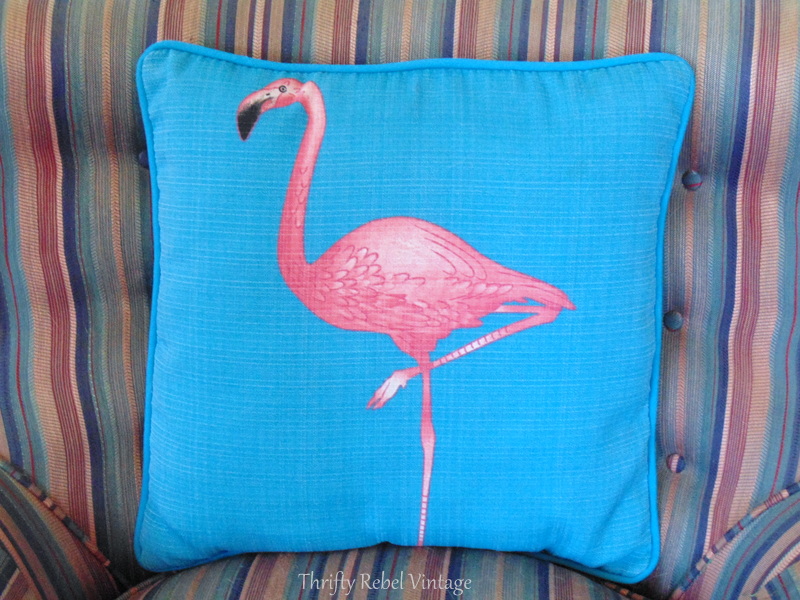 Then I recently found this pillow, and the creative juices started flowing into overdrive.

So to give you the back story… last winter I got fed up with my red living room walls, and one day I just woke up and decided to paint them… just so I didn’t have to look at them anymore.

Does that ever happen to you?

It was such a sudden thing, and I don’t have any red living room pics.

This happens to me sometimes. I think about something for awhile, and then one day I just have to do it.  No ifs, ands, or buts.

We lived with the red for 6 or 7 years, maybe even longer (you know how time flies) and I just couldn’t live with it another day. 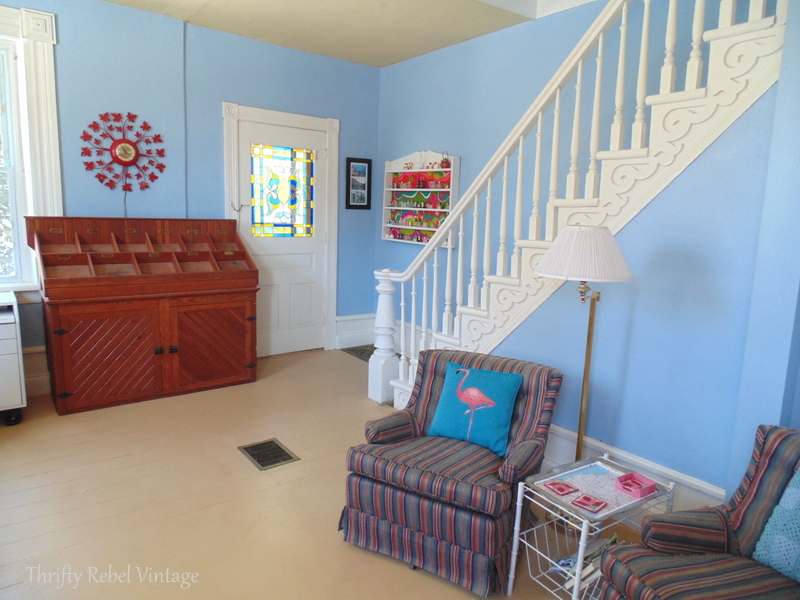 I painted the walls in an Oooops blue paint that I had on hand, and I felt so much better after the red was gone… even though the blue was not really what I knew I was going to keep. It has a grey undertone so it’s just not light and bright enough for me, but for $1o it did the job.

So then I could relax, and I turned my attention to the kitchen makeover which was in line before the living room.

Now don’t get me wrong, I don’t have  anything against red. My recently made over kitchen is aqua and red, but the living room red walls had become too much red for me and I really really really needed a change. 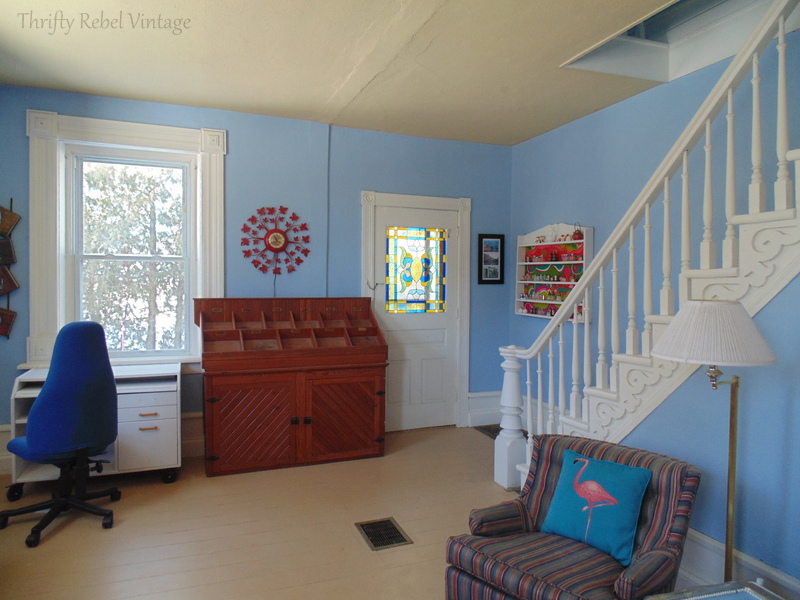 Our living room has always suffered from an inferiority complex because we have a family room at the back of the house off the kitchen and, quite honestly, we spend most of our time in there. That said, we do love to read in the living room in front of the wood stove.

The living room has a weird layout because of changes that were made to it over the years. Sometimes it feels like a very big hallway because we walk through it so much to go upstairs.

You can also see that there’s also a heat vent in the middle of the floor, which is a little awkward but we’ve gotten used to it. When the wall was there the vent would have been in the front parlour. 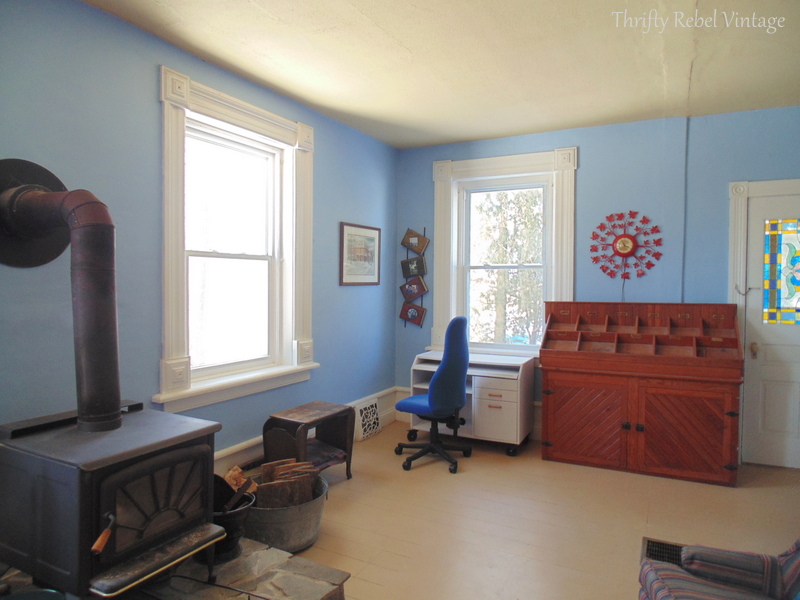 Another clue that this was considered the front parlour is that the moldings around these two windows are larger and fancier than in the rest of the house.

So this is where the owners would have received their guests way back in 1890 when the house was built.

I just found that desk and chair at the Restore for $40. The desk was an orangy wood that you’ll see when I share its complete makeover. I’ve painted it white, but it’s far from finished.

I’m setting myself up with a little office here so I can write on my laptop while looking out the window at the front gardens and the birds. It’ll be nice to be out of the creative chaos of my craft studio when I don’t need to be in there.

The old cedar general store cabinet will be going into the shed when spring gets here. We’ve had it for years and I think it’s pretty much been in every room in the house except the bathrooms, but it just doesn’t seem to fit anywhere properly. It’s so heavy and clunky, but will make for great tool storage. 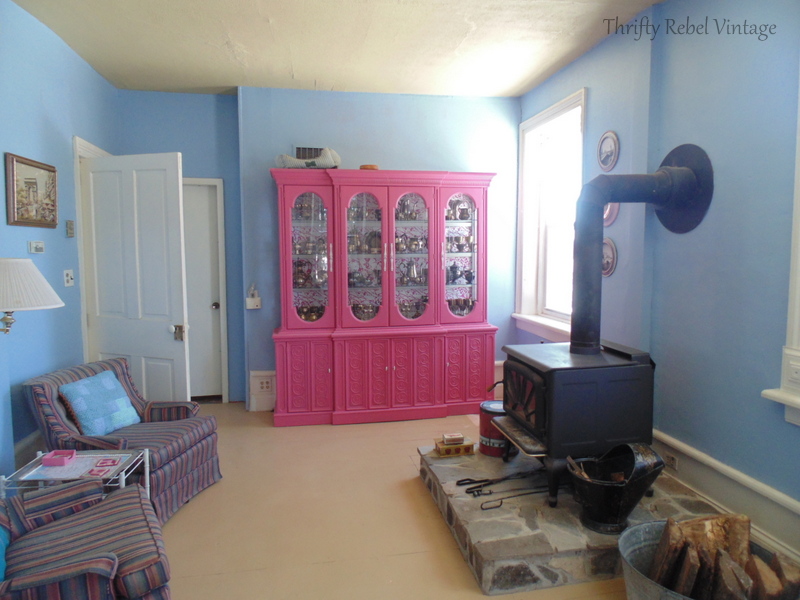 Here you can see another beam behind the wood stove which is where another wall would have been. Because of that beam the wood stove isn’t centered between the two windows. When we first moved in 20 years ago that really bugged me for quite a while, but I’m cool with it now. I love having fires in the winter so I got over it. 🙂

At some point someone took two small rooms and made the living room bigger, and added a small bathroom in behind the china cabinet.

In the above pic you can also see that the window moldings are not as fancy as the other two. So this window was definitely not originally in the same room.

My hot pink china cabinet that holds my silver collection is staying as is. 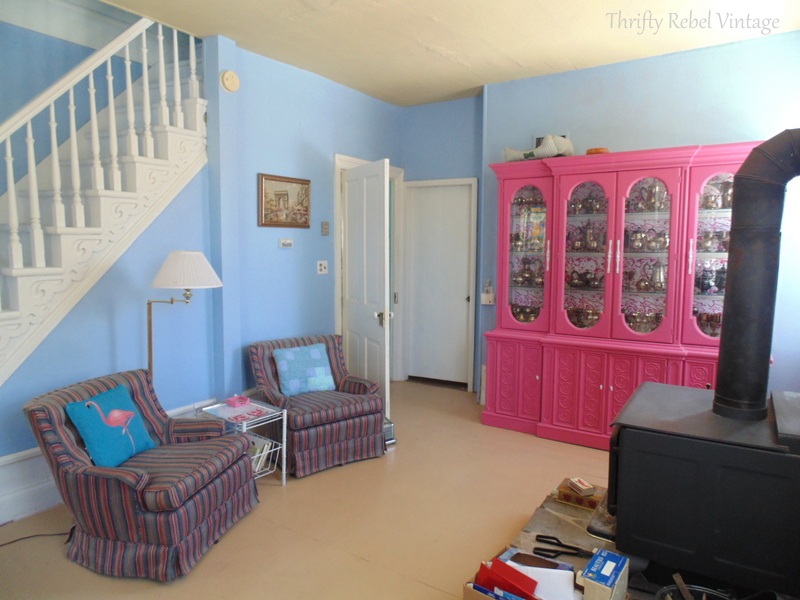 Whoever put in the bathroom, and that was a great idea, didn’t bother to match the door size and height of the original kitchen door beside it.

It would have been so easy to do when that wall was being put in. Now it’s a much bigger deal, and I’m not sure if I’ll be doing that.

It would look so much better though, so we’ll see.

The floor will be getting a makeover. This is the painted plywood floor that was underneath the laminate that I recently removed in a flurry one weekend. 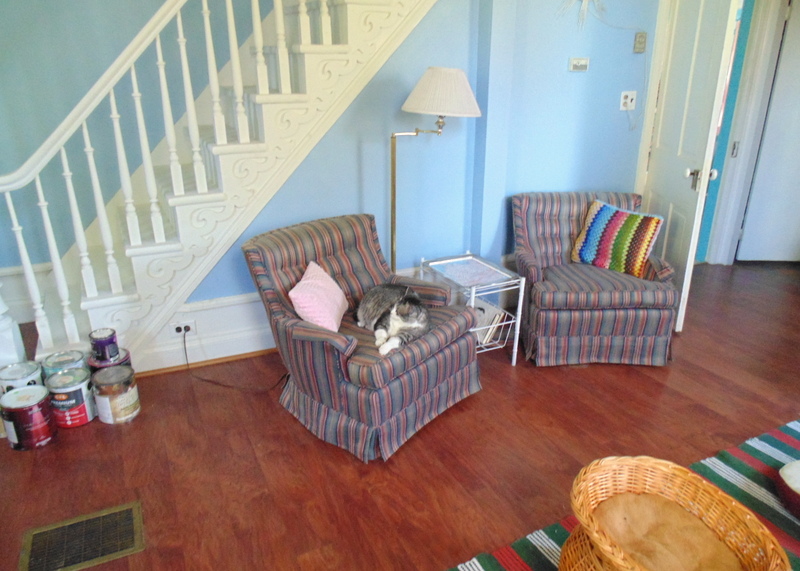 Here’a pic of that click together floating laminate floor. It was super easy to remove, along with the underpad. 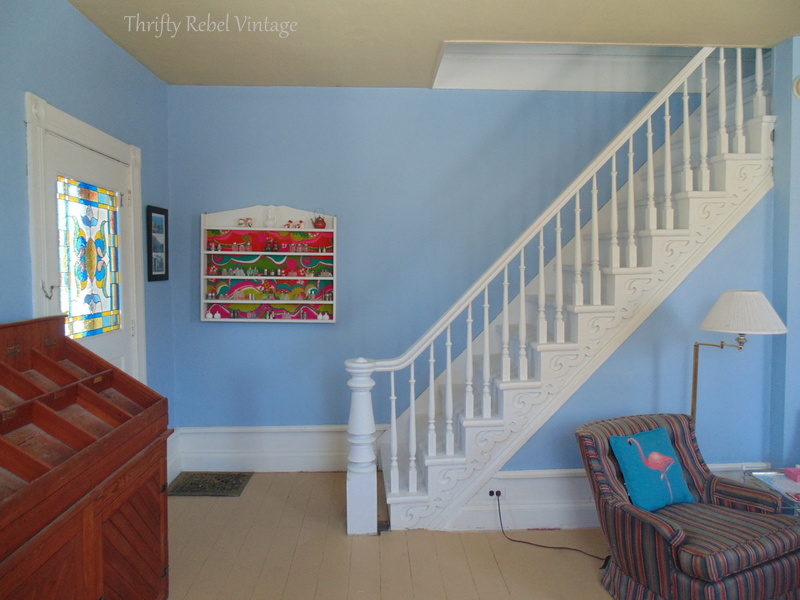 So, that’s the tour of the before of my weird and quirky living room. Pretty wonky right? lol.

The chairs, the china cabinet, and the wood stove (stone hearth and all) will be staying the way they are, so I’m hoping this makeover adventure won’t be as long as the kitchen one was… where I think everything got a makeover except the appliances.

So far I’ve painted the ceiling, walls, and most of the trim… and the room is already looking so different. I’ll be showing that too you soon, and I’m excited to start sharing projects with you.

I hope you’ll come along for this makeover ride. Decorating adventures are always more fun with friends along. 🙂 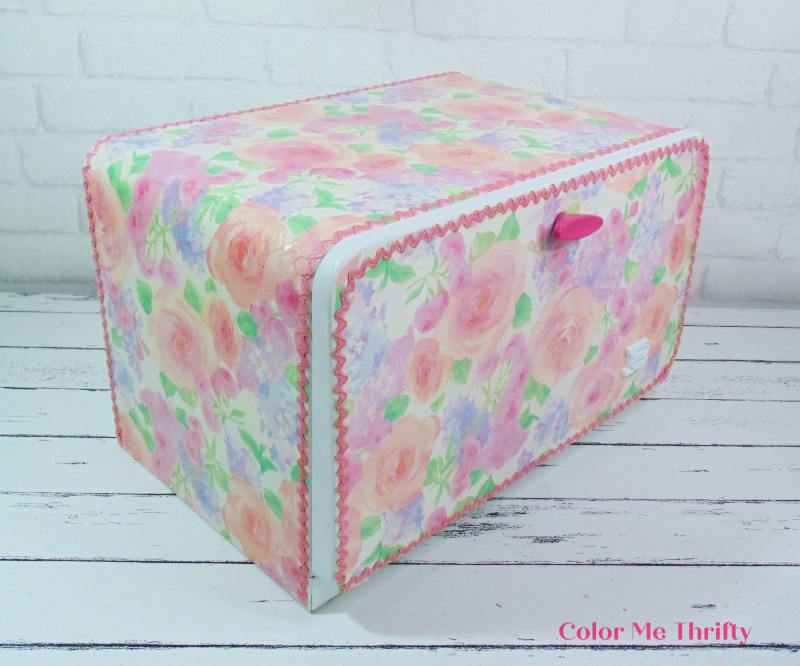 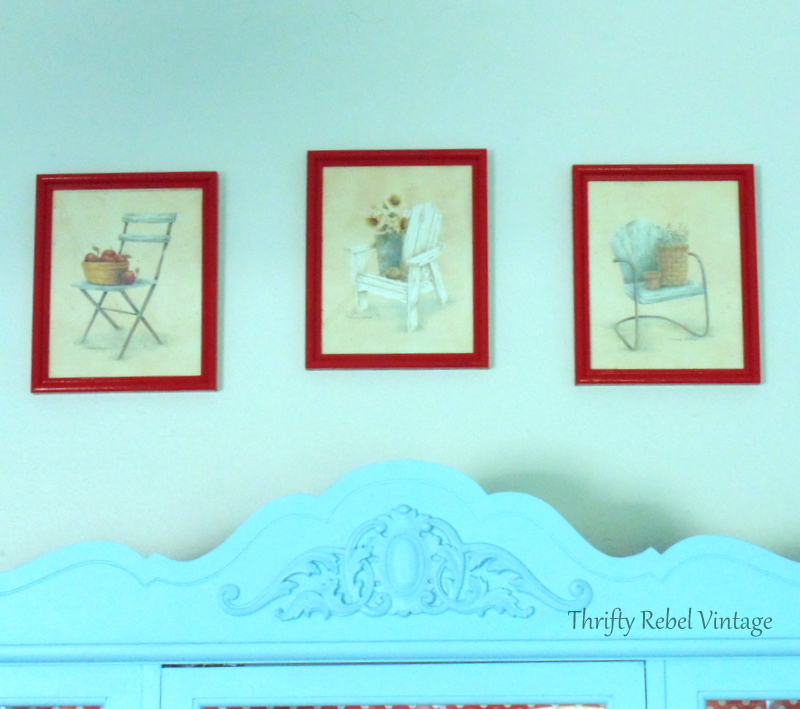 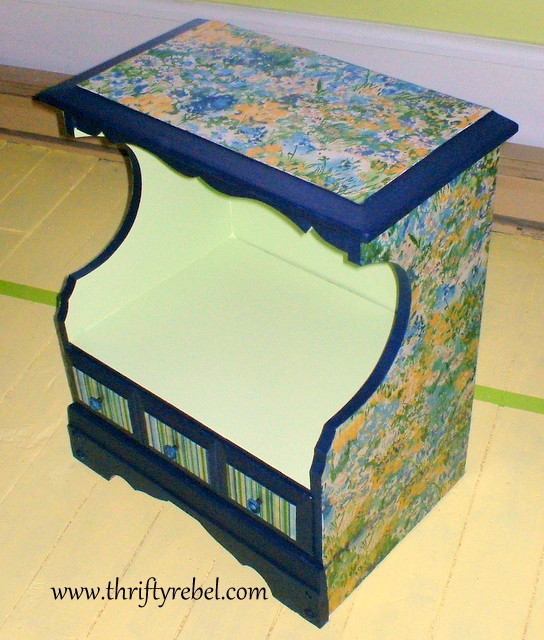 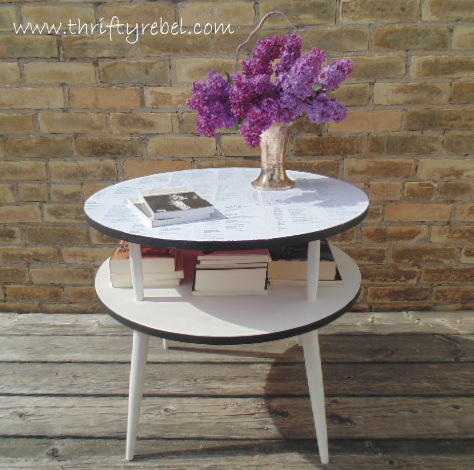 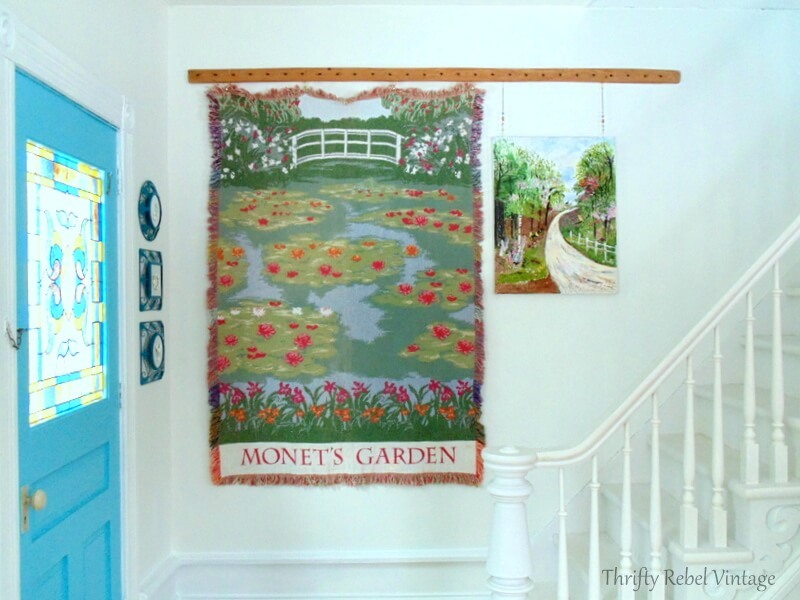 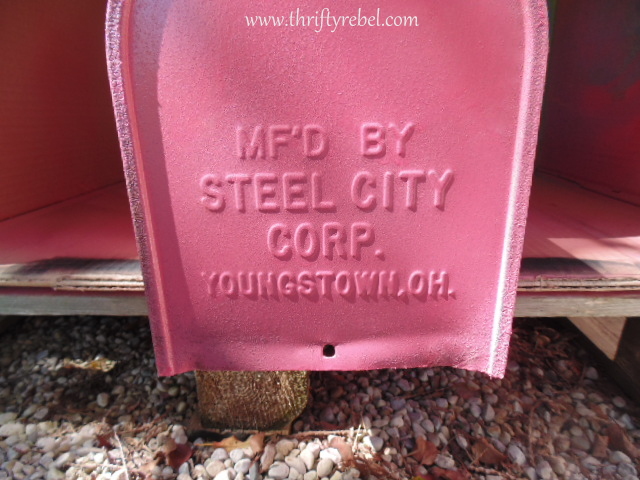