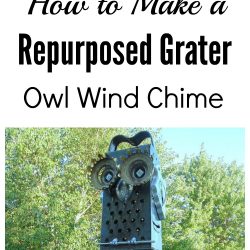 I’ve been wanting to make a junk owl for a long time and I’ve been collecting other people’s junk from thrift stores and garage sales to do just that.

And because I’m a girl who pretty much sees a wind chime in almost everything this had to morph into a wind chime project.

One of my favourite things to do is make stuff out of other stuff, and I’m pretty sure I’m going to love making these forever.

There are so many possibilities and combos to make every junk owl wind chime one of a kind. 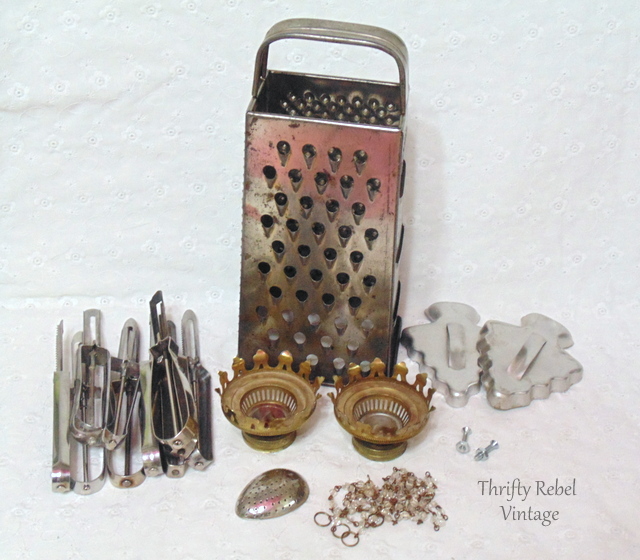 For this project I’m using: 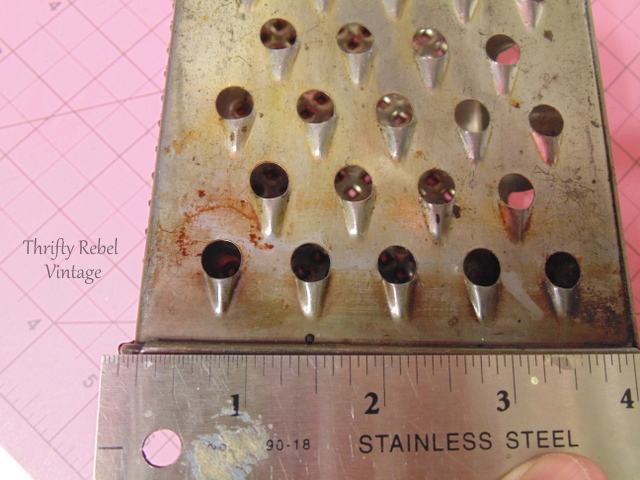 The first thing is to measure around the grater and figure out where you want your chimes to hang so they look equally spaced. Then mark those spots with a black marker.

My junk owl is having ten chimes. If you want less just measure and mark accordingly. 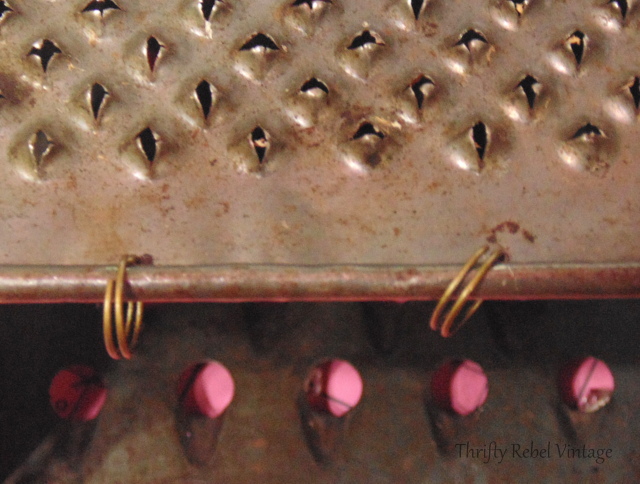 Then put the split rings into the holes. 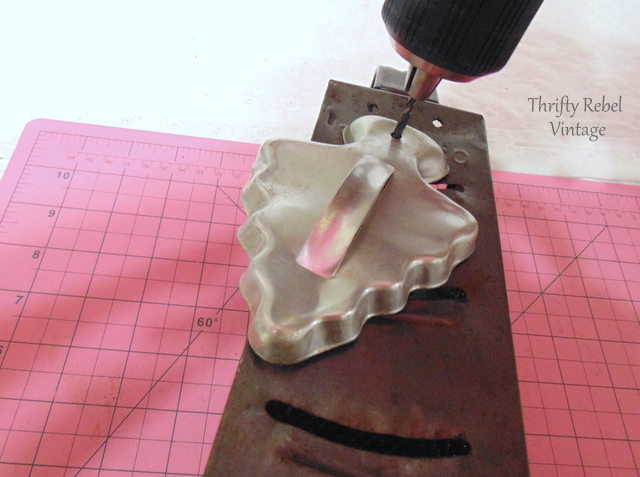 The two vintage Christmas tree cookie cutters are added next as the wings.

I drilled a hole the size of the bolt I’m using through the cookie cutter and the grater. 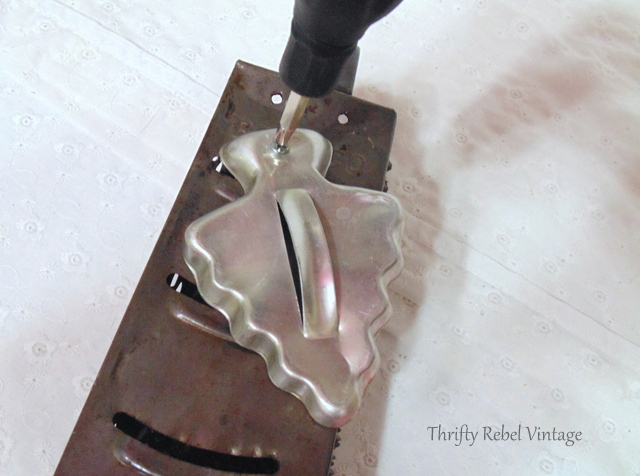 Then I fed through the bolt and attached the nut on the inside of the grater.

I tightened it up with a screw driver just enough so the wing doesn’t move, but not too much so the cookie cutter doesn’t get squished. 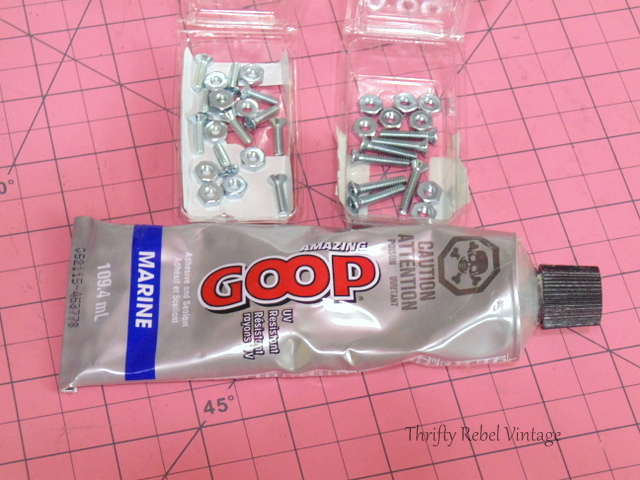 Here are the nuts and bolts I used. The longer ones for the wings and the shorter ones for the eyes below. I’ll explain where I used the GOOP adhesive in a bit. 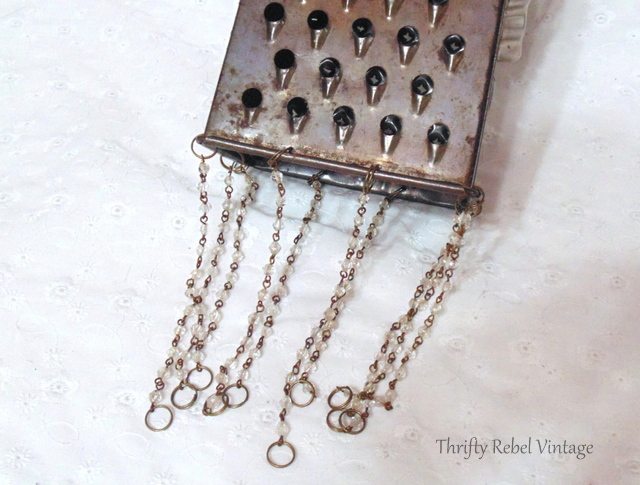 Next I added the vintage beaded necklace parts on the split rings and added split rings to their ends. 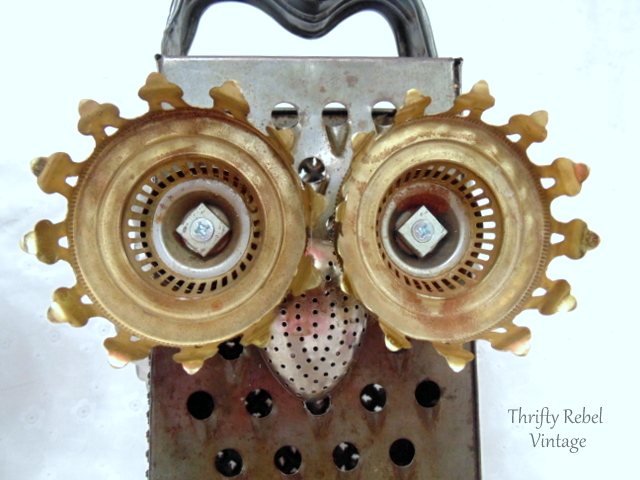 I attached the oil lamp part eyes, and the tea strainer nose, with Marine Goop adhesive.

After the goop dried I drilled holes through the eyes and added the nuts and bolts. Marine Goop is a very good glue but the eyes are kinda big and bulky so I just wanted to give them a little extra strength.

You can just see the handle in this pic and you’ll notice that I bent it to look like owl ears. I did this very gently with a hammer and my hands helping it as I went until I had it the way I wanted. This handle was a bit thicker than some so I really couldn’t bend it as much as I would have liked, but I think it looks ok. 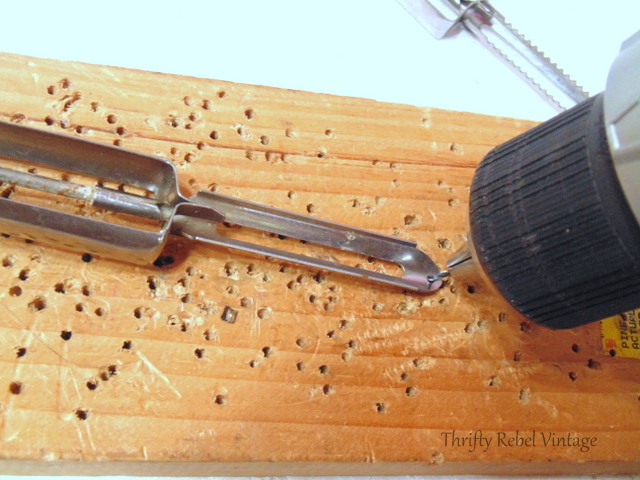 I had planned on hanging ten veggie peelers, but I was only able to drill a hole into eight. 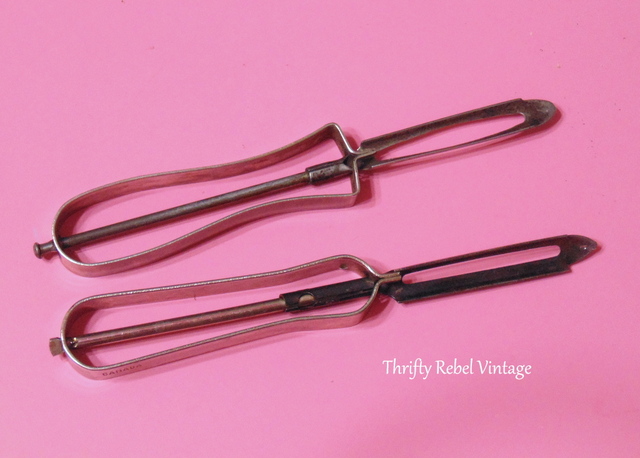 No matter what I tried these two seemed pretty much inpenetrable, and I barely made a dent in them. 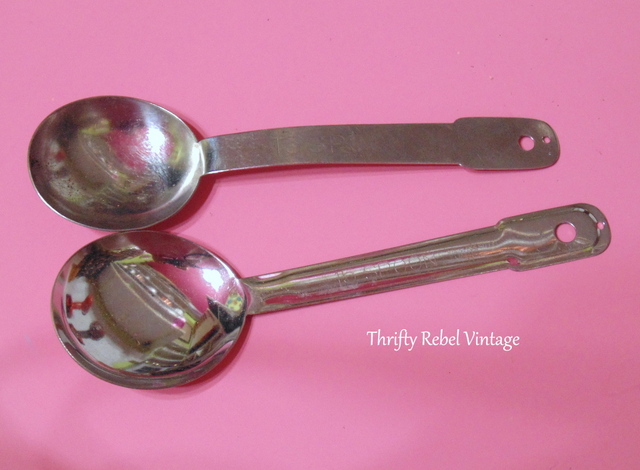 Which was two long stainless steel measuring tablespoons. They were very easy to drill into. 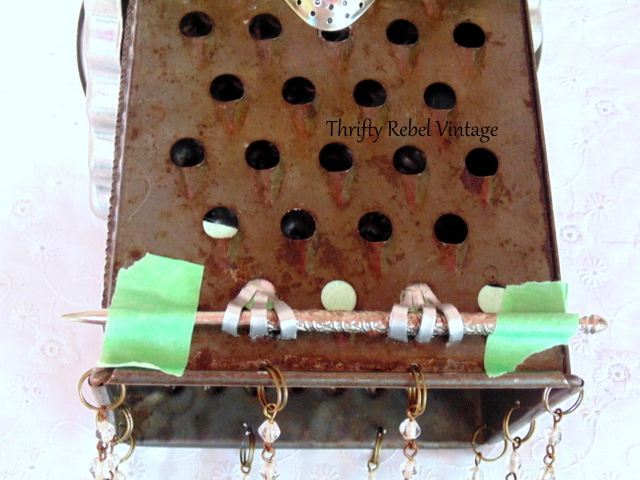 Before I attached all my chimes I really wanted my owl to look like he was sort of resting on a branch… so I went looking through my stashes to see what I could find. In my vintage nut cracker collection I found a bunch of picks, and I thought they could work just fine.

Before attaching the pick I used pliers to break off a bit of the sharp end to make it nice and blunt. Then I glued it on with Marine GOOP just below a row of grater holes.

For the feet I used a very soft metal vintage tart tin that was very easy to cut with regular scissors and I glued the three toed pieces on the inside of the grater through the holes. I used painters tape to hold everything in place until the glue dried. 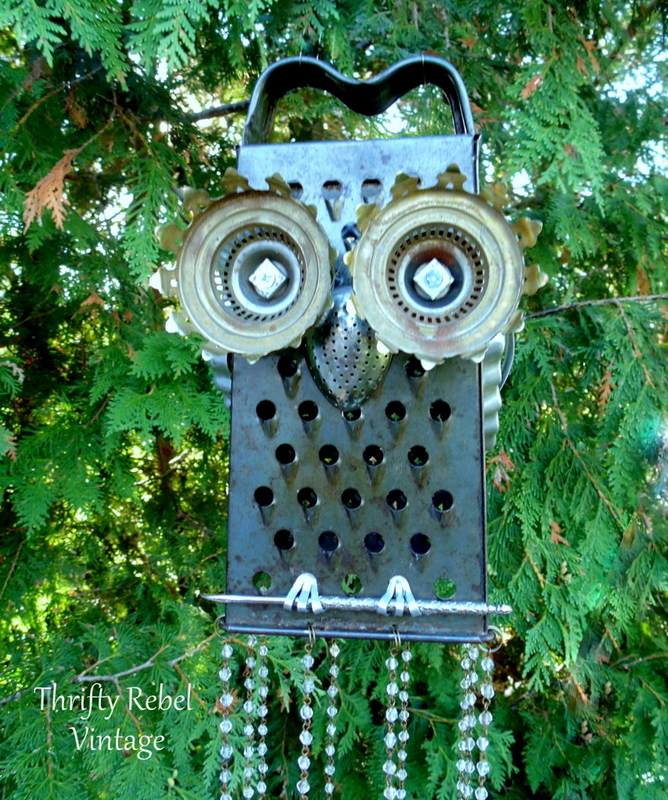 And here’s my finished junk owl wind chime hanging by the cedars next to my green house/junk storage house. 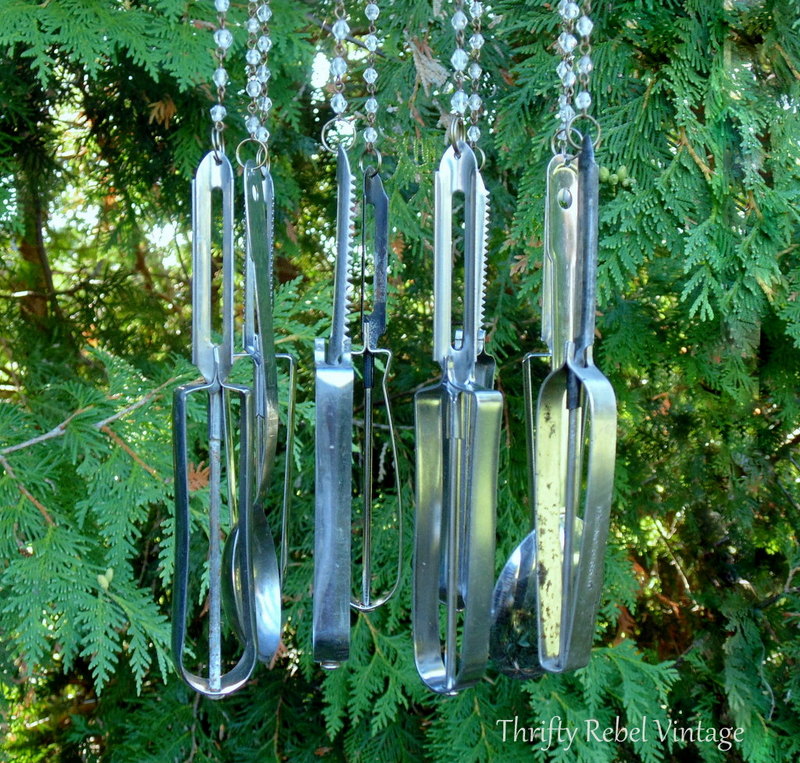 I hung four veggie peelers across the front and four across the back, and one measuring spoon on each side. 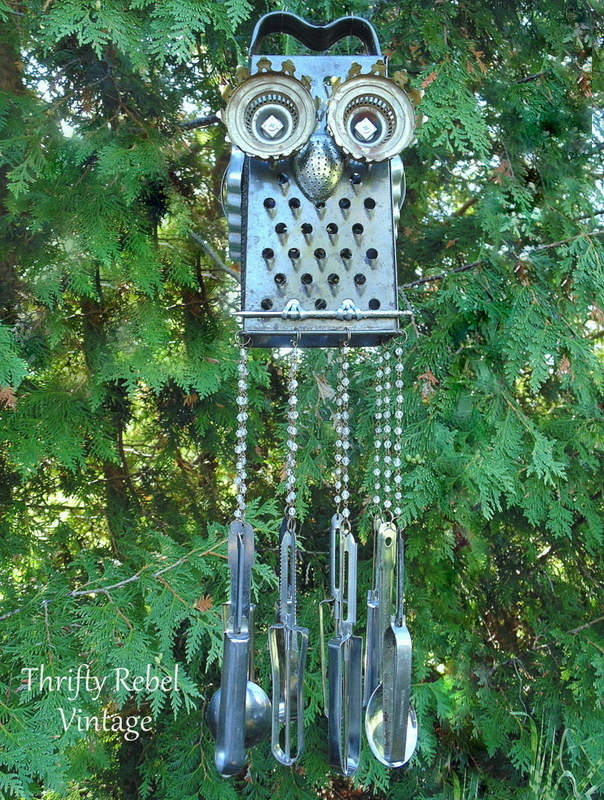 I’m a symmetrical-loving kind of girl so I liked the way this looked. 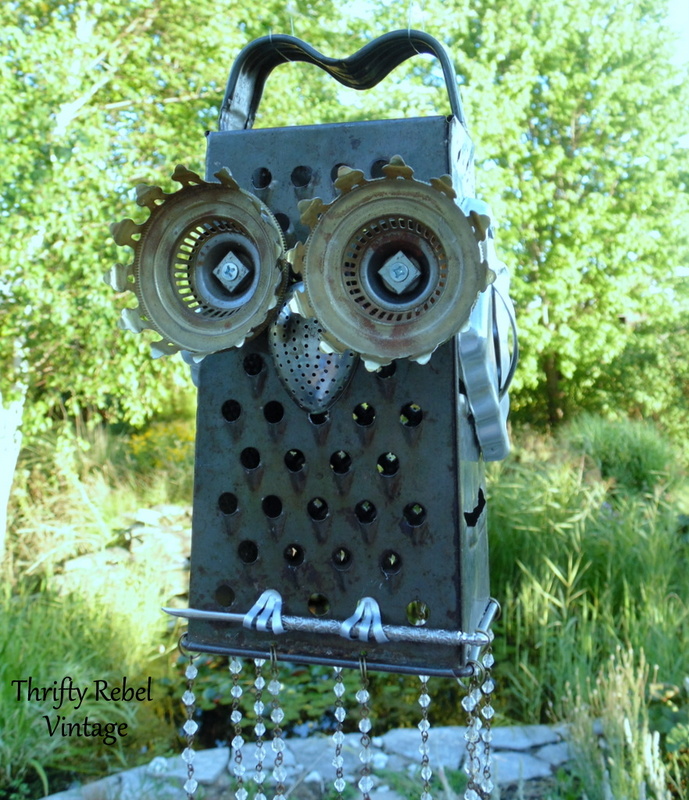 And here he is hanging out by the back deck .

I used fishing line to hang him from his ears because it’s pretty much invisible to the eye, but you can see it a bit in the pics. 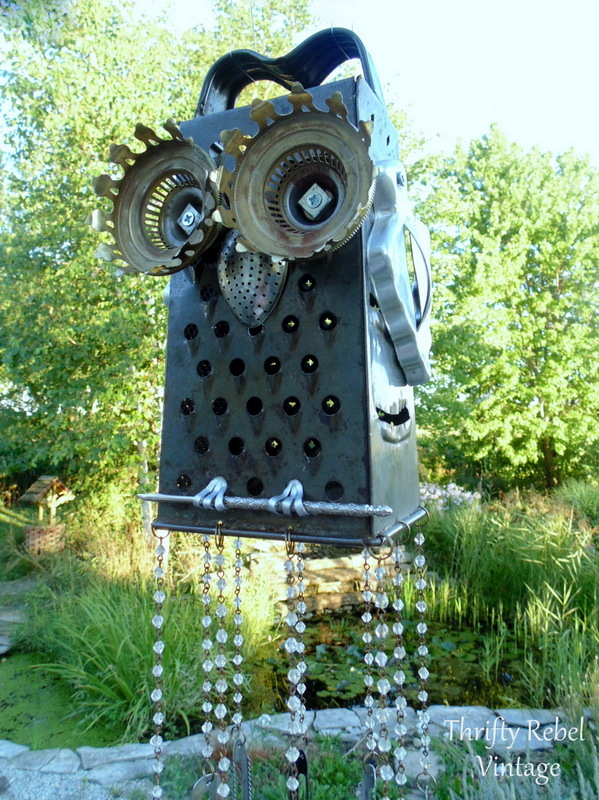 I thought about adding something to the eyes (and I even dry fit a few different ideas) but I just kept coming back to this original look, and I decided that I kinda love him just the way he is.

When making wind chimes I love using different things for the chimes and these veggie peelers have a nice soft tinkle to them when they hit each other in the breezes, and the two measuring spoons add to this tinkling quite nicely.

I had so much fun making this junk owl chime that I’ve already made a few other versions using different junk.

Here they are. They’re all made basically the same way, but I used measuring spoons as the chimes. 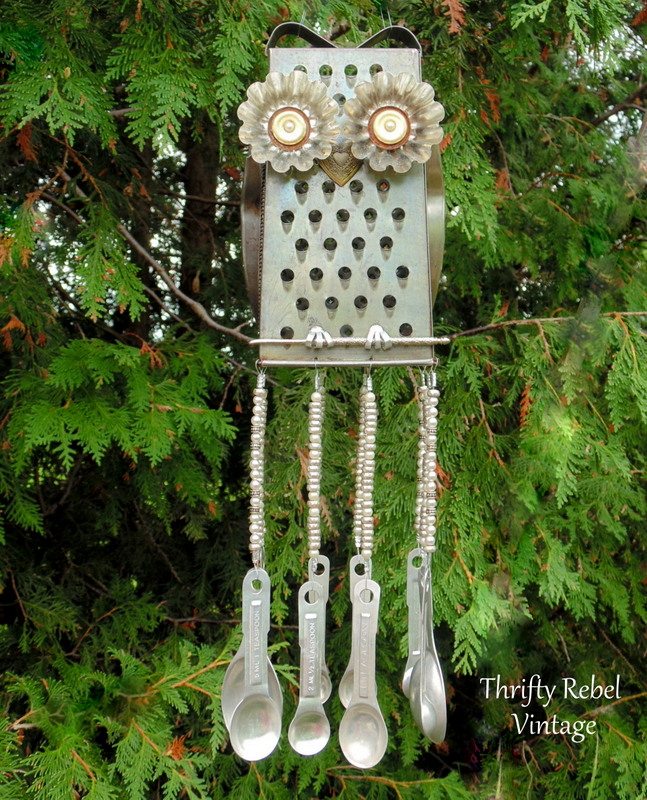 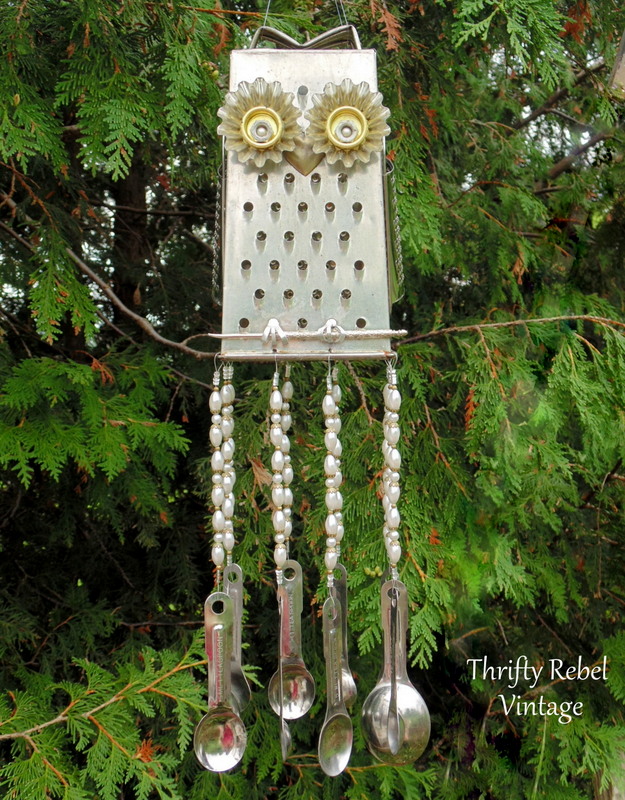 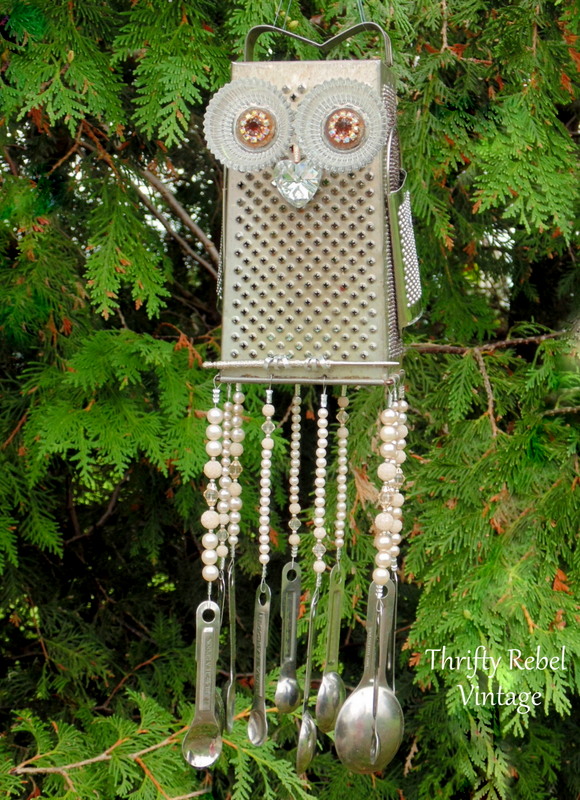 Repurposing stuff is what I love to do for fun, and making wind chimes is one of my favourite things to do. When I can marry these two things together in one project… well that is just a total blast.

If you love owls and you enjoyed this project, you might also enjoy my repurposed Owl fall door decor project.

Pin to your favourite board and share with your friends.

In case you missed them here are a few of my other wind chime projects.
Silver Goblet Wind Chime
Vintage Sifter Wind Chime
Strainer Planter Wind Chime
I sometimes share my projects and posts at these fabulous parties listed here. 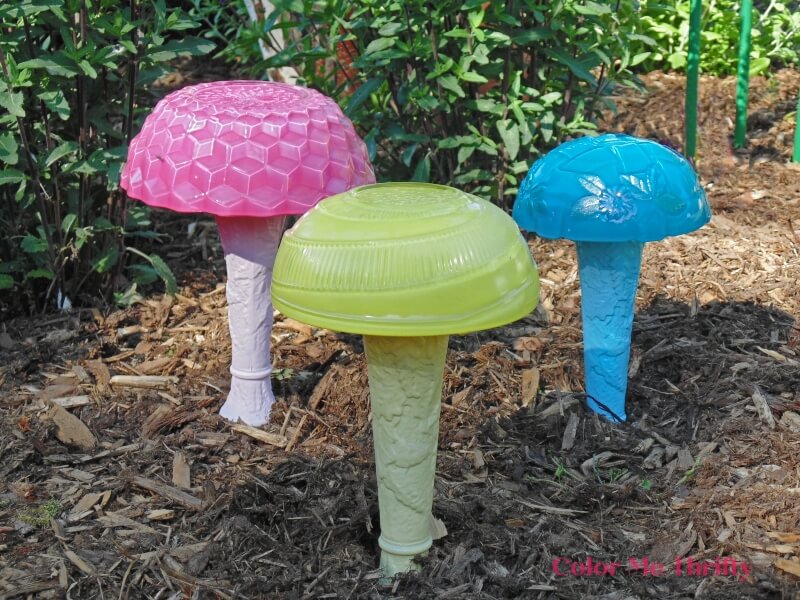 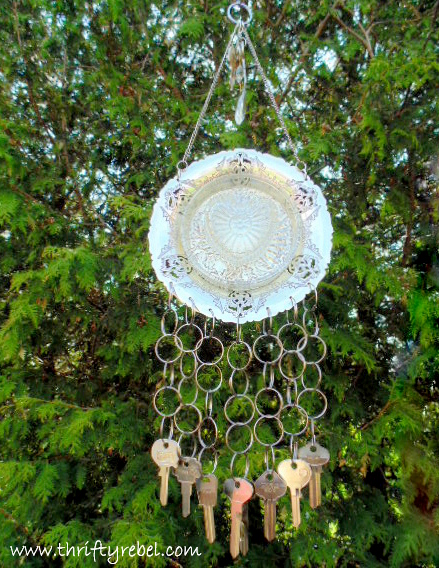 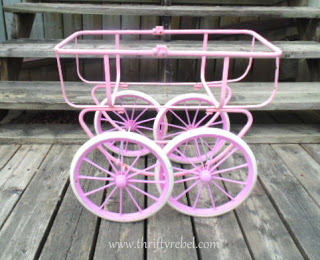 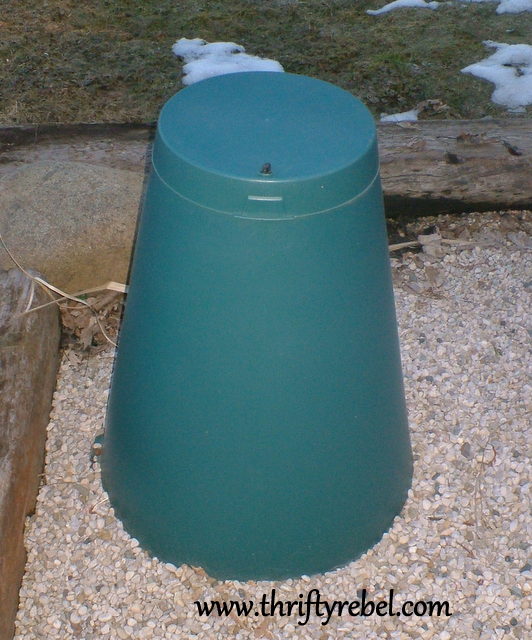 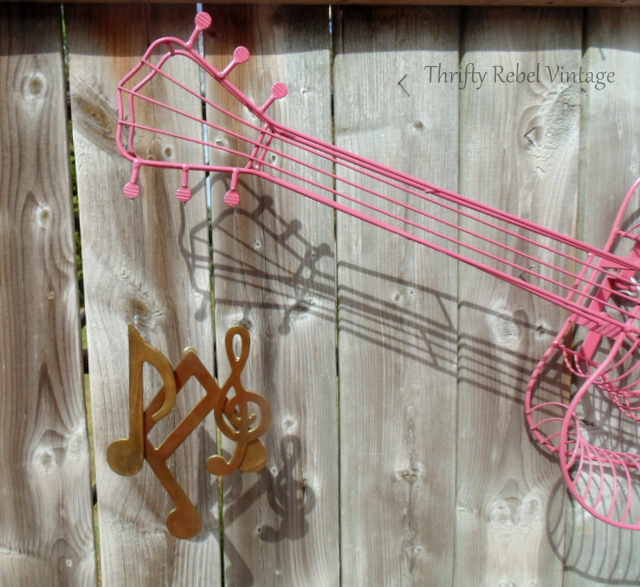