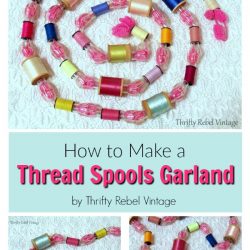 It’s my favourite time of the month again… time for the Thrifty Chicks project challenge.

I was really looking forward to this month’s challenge because a couple of weeks ago I finally found a small stash of thread spools.

Once I had them I thought surely something that excited me would come to mind.

Oh, sure I had a lot of ideas, but nothing that really made my creative juices start flowing.

Until this past weekend.

John and I popped into a small thrift store that I rarely go to and I found something very cool, and an idea immediately popped into my head.

Don’t you just love it when that happens?

On the second Wednesday of each month I join some very talented blogging friends for a project challenge, and with a different theme each time it’s really a lot of fun.

If you missed any of the past projects you can find them here.

I’m so excited to see what my blogging friends have come up with for this month’s thread spools challenge. You’ll find links to their projects at the end of this post. Be sure to visit and check out the fabulousness.

How to Make a Repurposed Thread Spools Garland 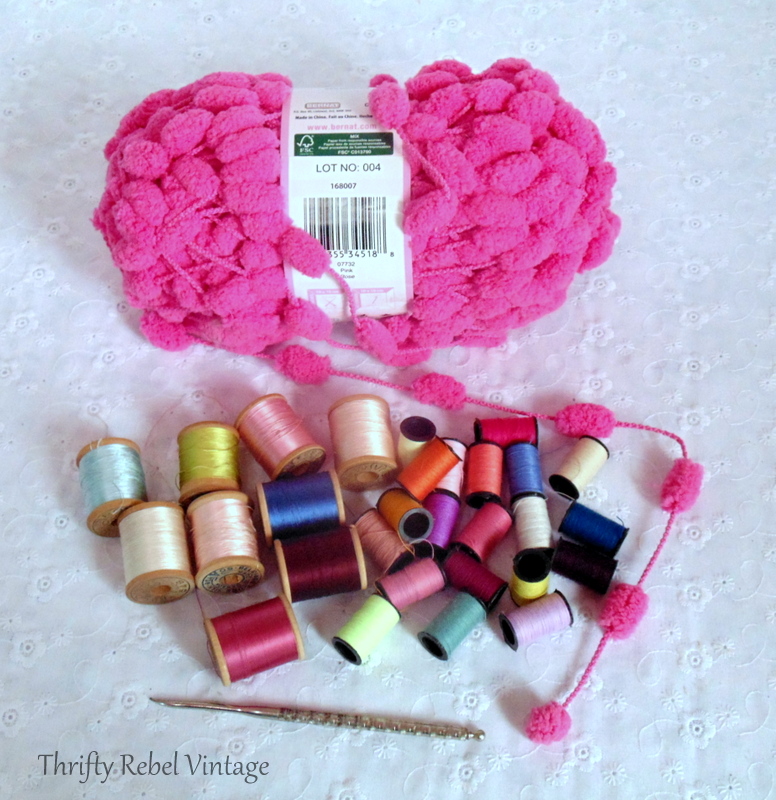 So here’s what I found at that little thrift store… some fun pink $1 puff ball yarn. I’m not a knitter so I’d never seen this kind of yarn before, but when I saw it I knew right away that I had to have it for this project.

The colorful thread spool lot that I found a couple of week ago also cost just $1, and the nut pick I already had. 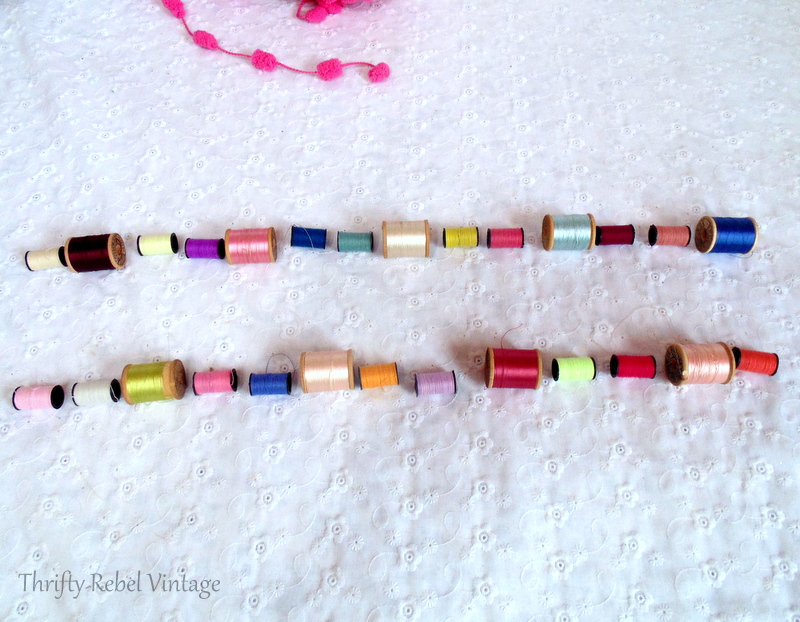 When making a repurposed thread spools garland with the thread still on the first thing you want to do is organize them. This way you can make sure to alternate the colors.

I’m usually a fan of winging it but for this project I decided I’d better plan ahead rather than have to correct something later instead. It would bug me if colors that were too similar were next to each other.

Because I’m using two different thread spool sizes I’m alternating one large spool with two small ones… with one small one at each end. 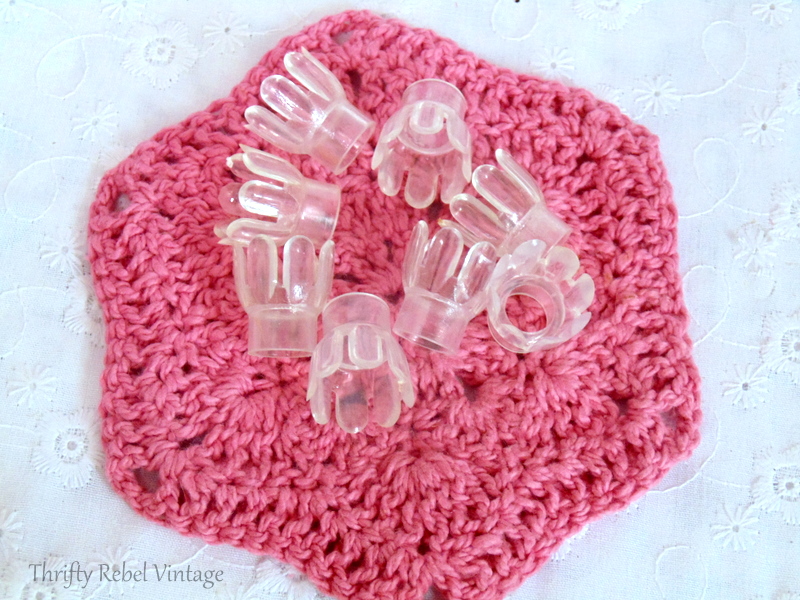 I needed something to hold the thread spools in place so they didn’t misbehave between the puff balls on the yarn.

I forgot to take a pic before I started my project, but luckily these are the ones I had left over.

Stringing the yarn with light reflectors and thread spools 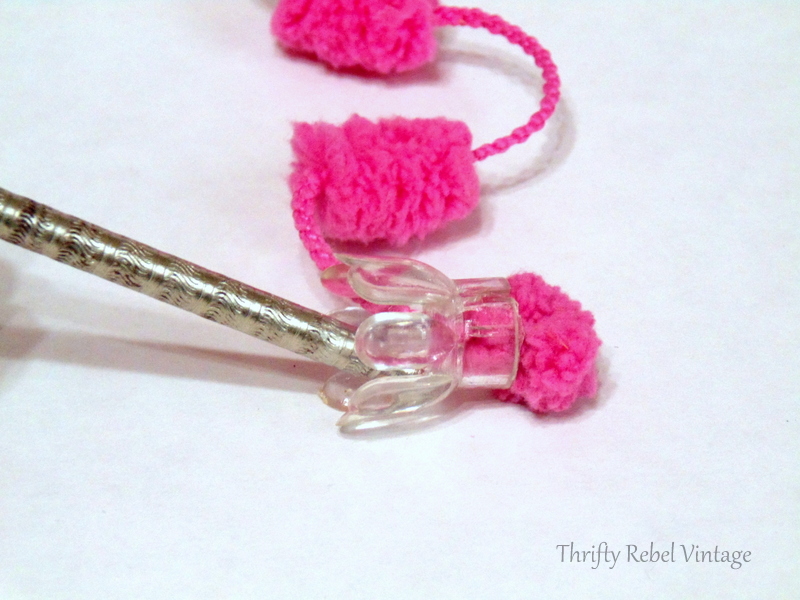 To start my garland I pushed the puff ball yarn through a reflector with the rounded end of the nut pick. 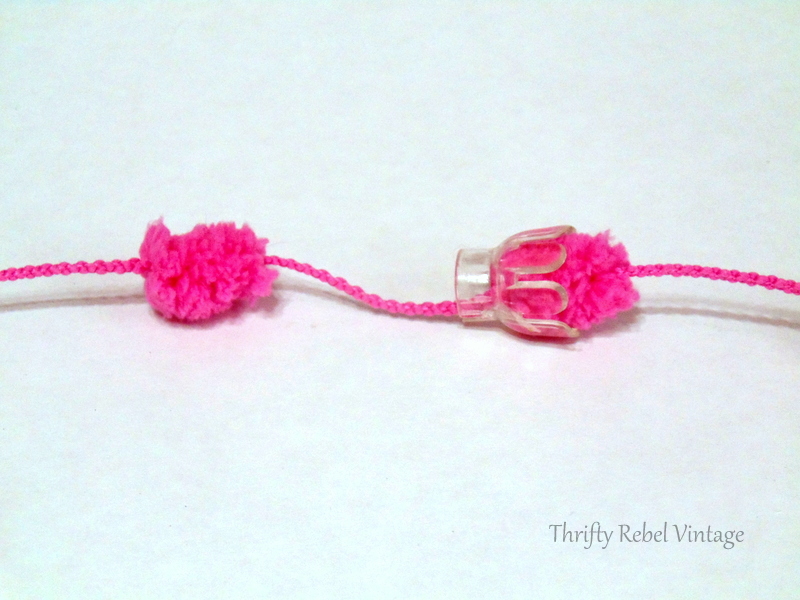 The light reflectors are going to cover the puff balls, but because they’re clear you’ll still see the pink coming through. 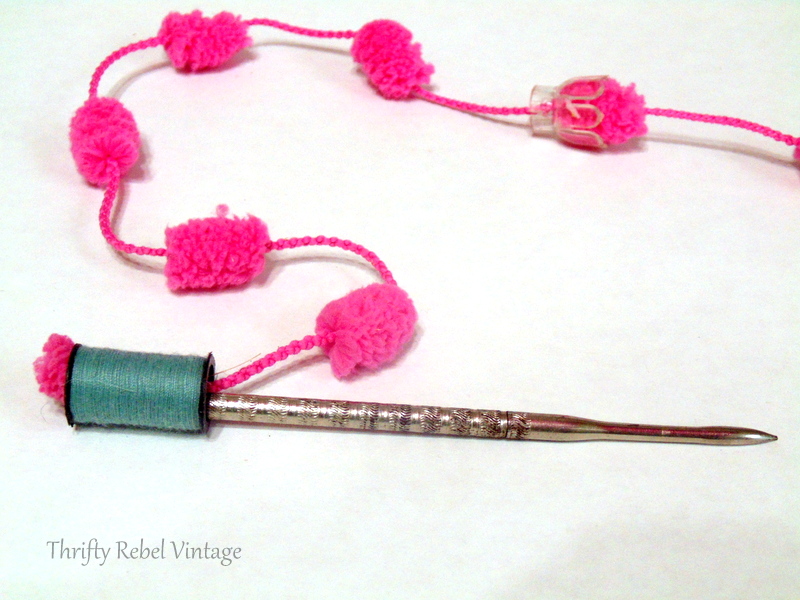 With the nut pick I pushed the yarn through a small thread spool.

Both these and the light reflectors went very easily down the yarn. 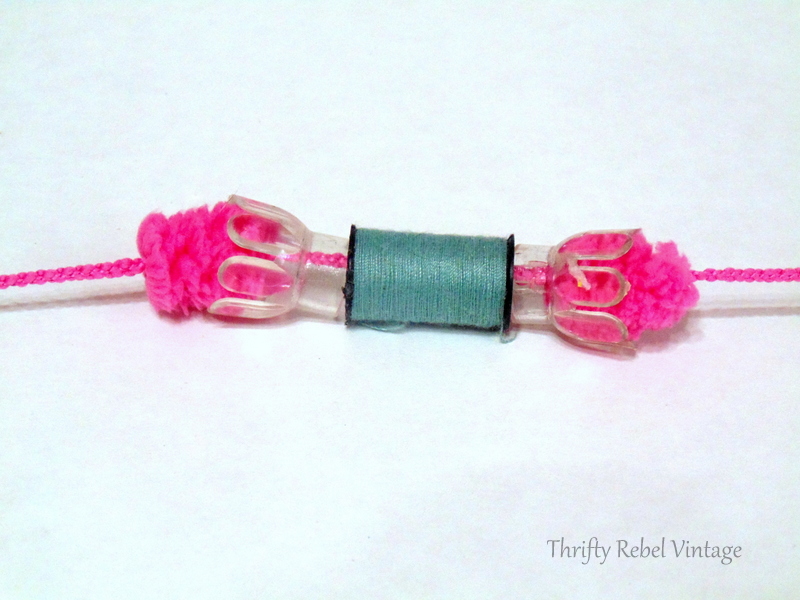 And then another light reflector was added, but in the opposite the direction of the first one. 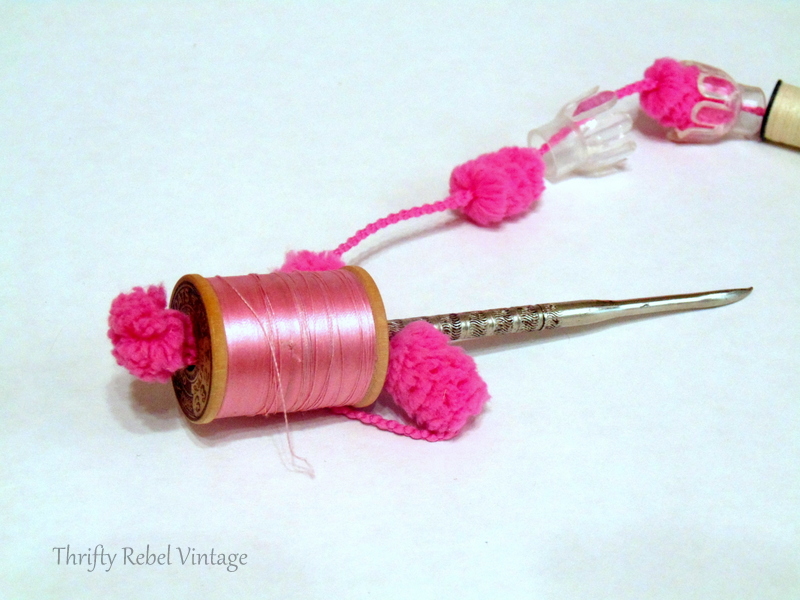 It was a little harder to poke the puff ball through the larger spools, but with a little care it still went through.

You only need the pick to get the first puff ball through, and then you just pull the puff balls through the thread spool as you go. 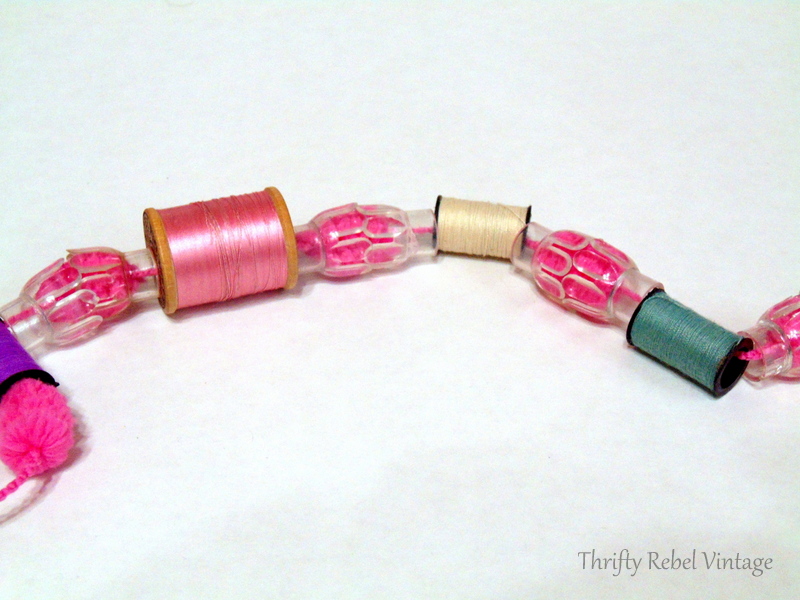 Here you can see my two smaller spools and then a bigger one, with the light reflectors in between. 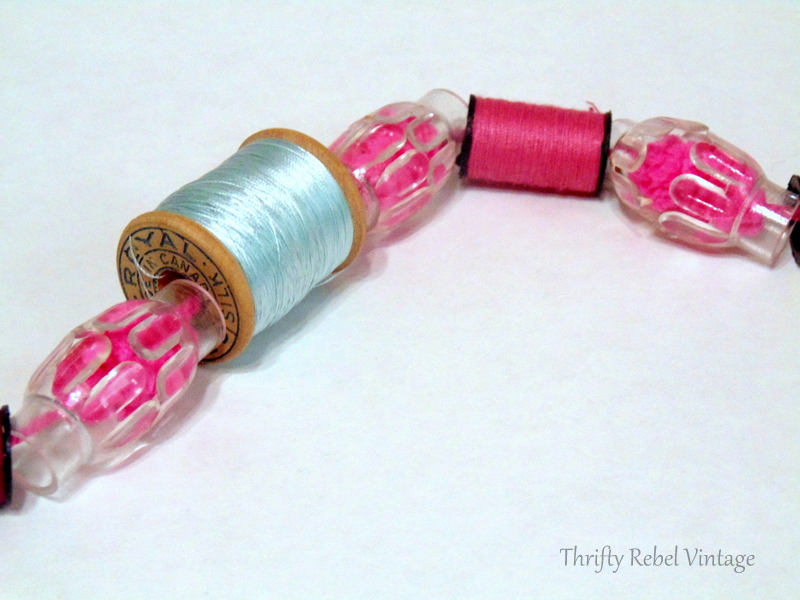 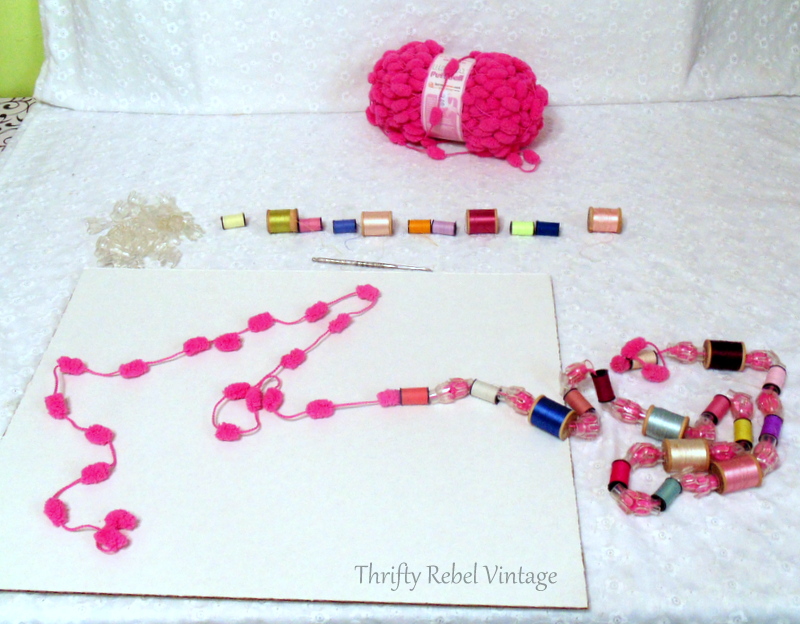 I went about half way through the yarn and then started from the other end. 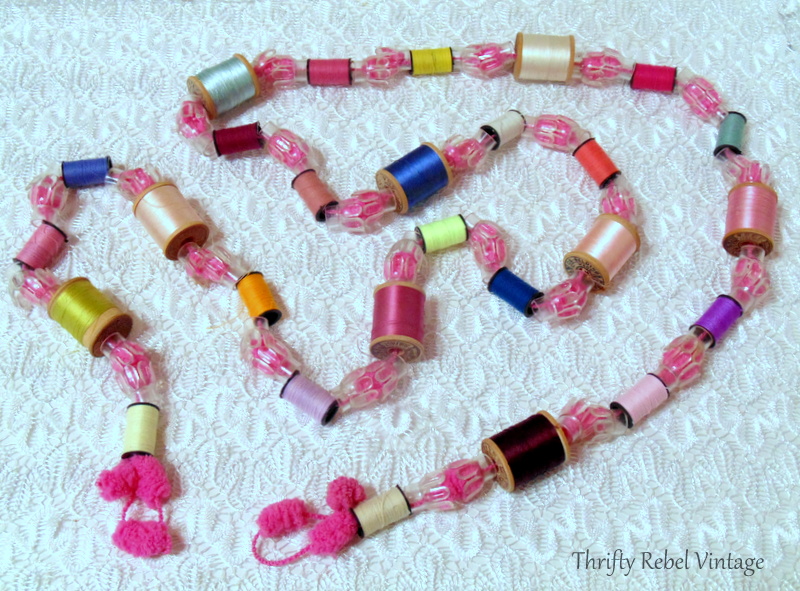 And here’s my repurposed thread spools garland all finished.

I made this as long as my thread spools would take me, which is about 68 inches. 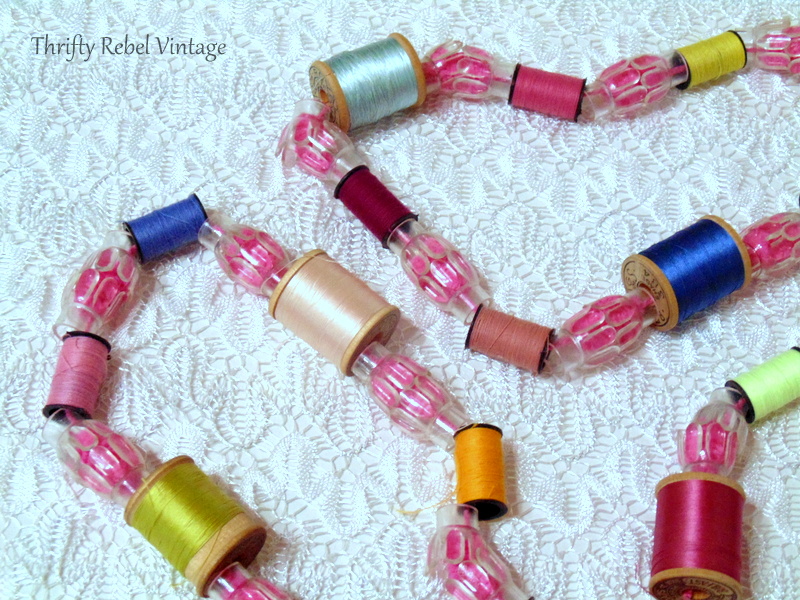 Once I decided on the order of my spools it only took about an hour to put together, and because nothing has been permanently attached it can be taken apart very quickly and easily.

Don’t stress it if some of your spools aren’t covered completely with thread like my green one above. It really doesn’t matter. 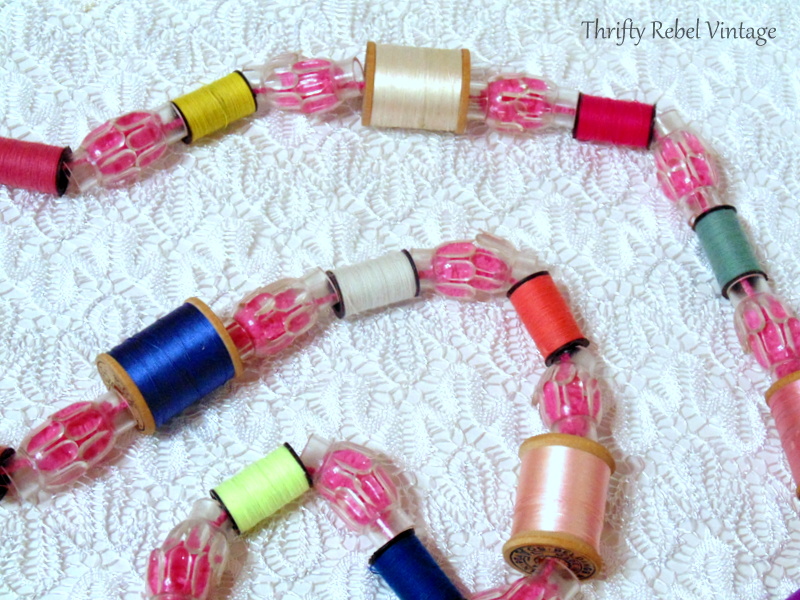 If you have threads flying around you can just wrap your spool with scotch transparent tape, not the whitish stuff. I can’t remember what that’s called. 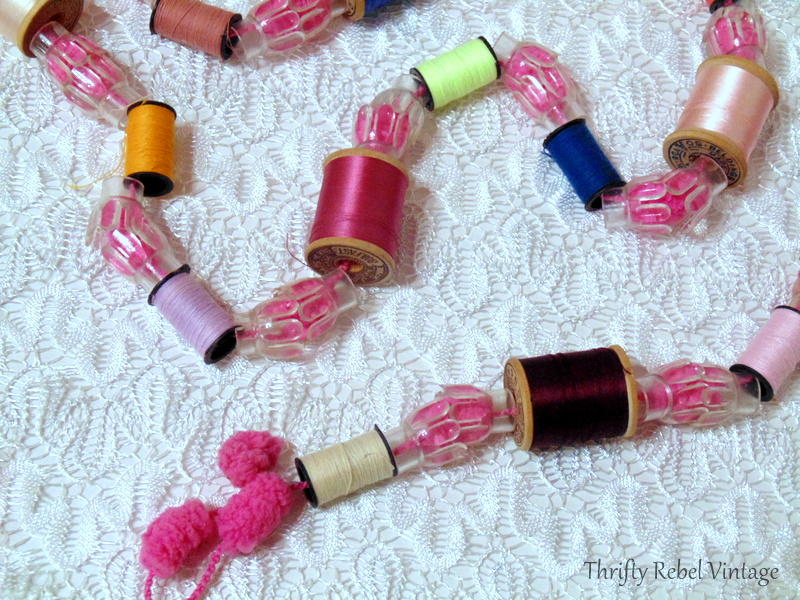 I tied both ends of the yarn so this garland can easily be hung on the Christmas tree, which I don’t have up yet.

The trees outside are all covered in snow, otherwise I would have taken a picture outside for sure. 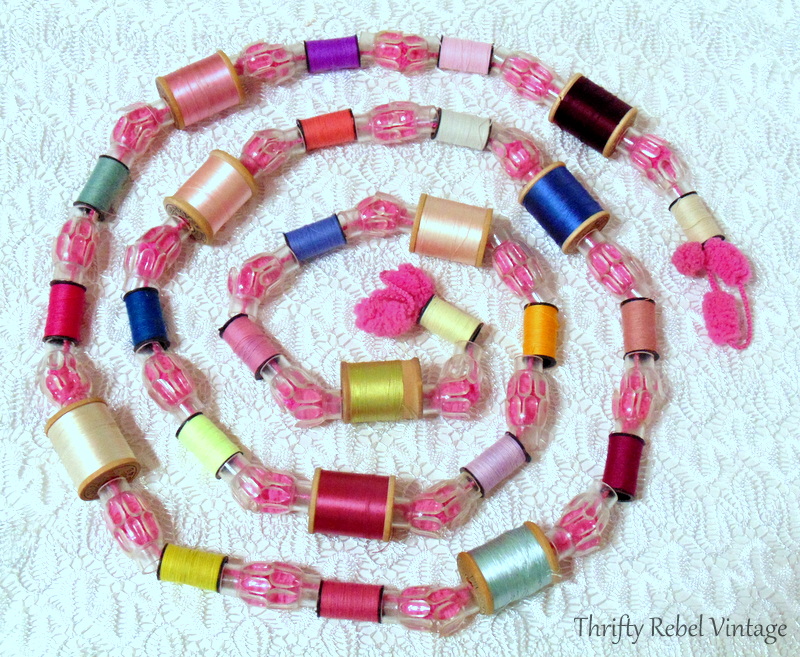 So if you have a large collection of thread spools and want to do something special with them this might just be the project for you. If you don’t have light reflectors like mine you could use buttons, beads, or bobbins on either side of the spools just to name a few possibilities.

It’s quick, easy, and you can still use the thread spools in the future if you want to.

After Christmas it can be hung in your sewing/craft room…maybe across a cabinet or the top of a curtain in a window.

Now be sure to check out what my friends did with their thread spool projects.

Just click on the links below to check them out.

Please pin to your favorite board and share with your friends! 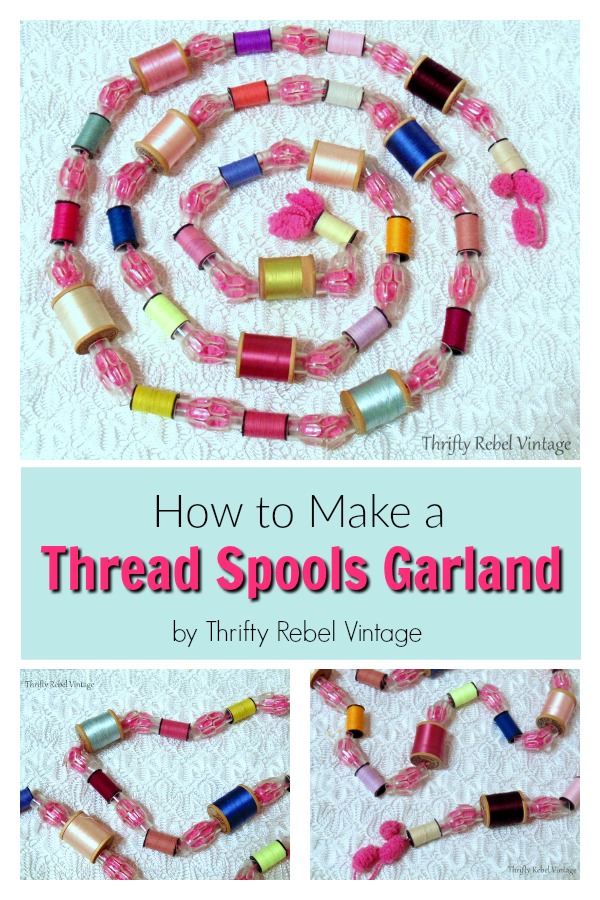 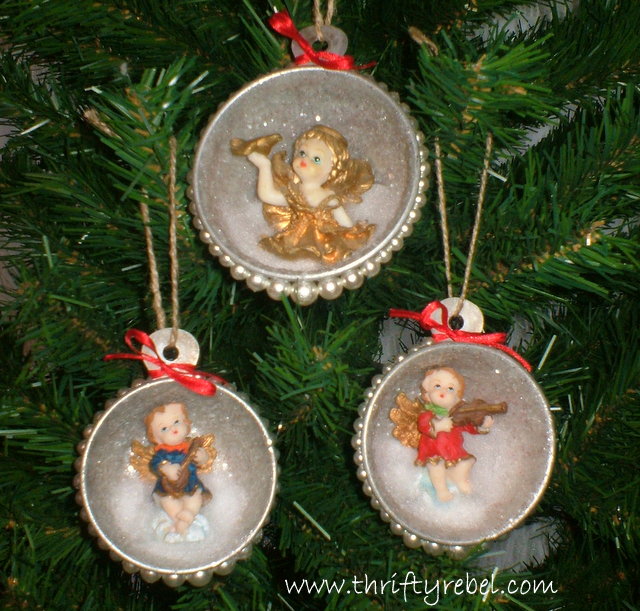 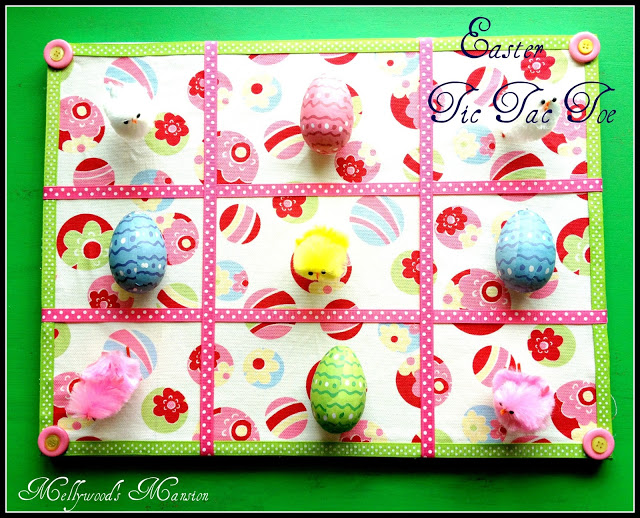 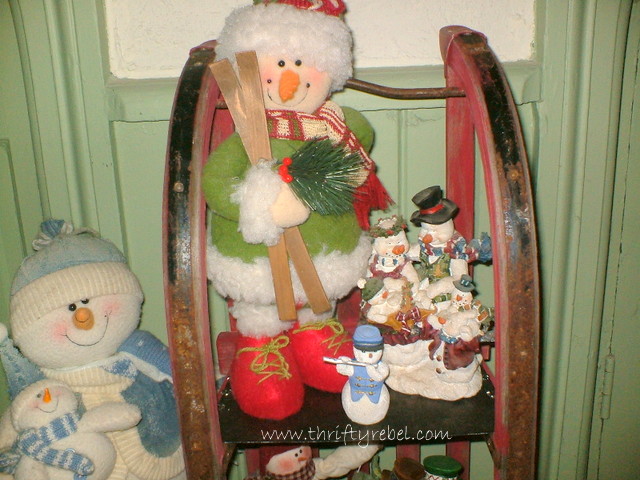 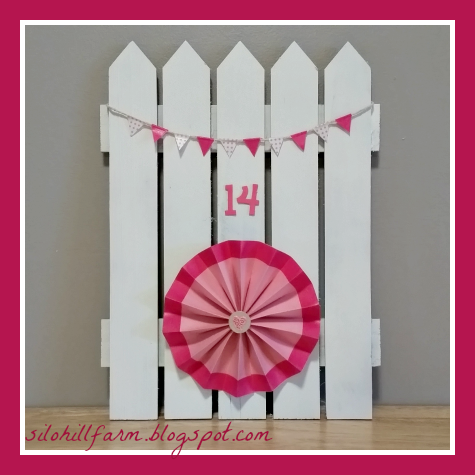 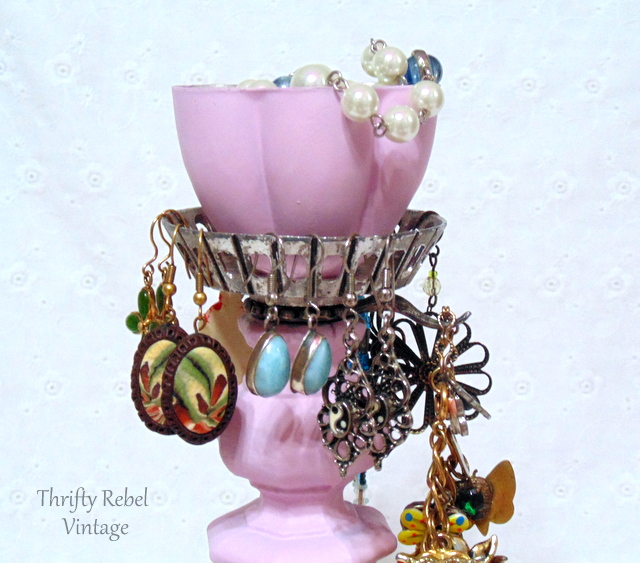